After a very even first half which saw both teams exchange shots but no goals the second half was a different story. In that first half the Falcons’ keeper Samantha Seaborn turned away three shots while Royals’ netminder Elisha Machado made one save.

The Royals came out flying in the second half and scored the first goal of the game off the foot of Gracie Quesnelle who lit the lamp in the 47th minute.

The Royals directed 19 shots towards the goal in the second half with Seaborn making four saves. At the other end Machado was not tested and didn’t have to make a save in the second frame.

These two locked up for an extremely tight game on Saturday. The defences and keepers took over and didn’t allow much.

Mariners’ keeper Melanie Osborne made nine saves and recorded her third shutout of the season. On the other side of the field Blues’ goalie Sabrina Lam kept her team in the contest making five saves.

The lone goal, which turned into the game winner, was scored by Justine McMahon in the 26th minute. The marker is her first of the season.

The Royals stay undefeated after jumping out to a quick lead on Sunday. Taylor Spong scored her third of the season just two minutes into the contest.

Then in the 24th minute the Royals found the back of the net again when Alyssa Lum kept pace with Spong in team scoring, netting her third of the season. The Royals rode that 2-0 advantage into halftime.

In the second half the Blues started putting pressure on the Royals and began finding chances on their net. However keeper Elisha Machado was equal to the task. She turned away 14 of the 15 shots directed at her goal.

The Blues were able to solve Machado in the 68th minute when Claire Ye tallied her second of the season cutting the lead in half.

However that was as close as the Blues would come. Mikaela Montagano scored the Royals third goal in injury time giving her club their fifth win of the campaign.

The Mariners continued their hot play with their fourth win of the season on Sunday. Shea Battie opened the scoring in the 12th minute with her first of the season. She would tally her second of the game in the 40th minute giving the visitors a two goal advantage.

The Falcons cut the lead in half in injury time when Tatiana Benoit scored recording her first of the season.

The game stayed that way for the majority of the second half as both keepers Melanie Osborne (Mariners) and Olivia Austin (Falcons) each made two saves.

The Mariners got an insurance marker in the 89th minute when Kanae Yamamoto scored her first of the season. 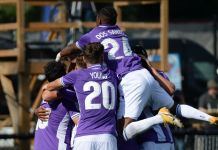