Kessel and Radford came into the show in the bottom two, alongside Olympian in pairs skating and Season 4 winner Amanda Evora and her partner, former Toronto Maple Leaf Colton Orr. The two teams were ranked lowest of the six competing pairs ,(note: Violetta Afanasieva and her partner P.J. Stock were given a bye during the first week due to the forced departure of Afanasieva’s original partner Colby Armstrong following an injury suffered in training)..

At the end of an intense skate-off in tonight’s episode celebrating the ‘decades,’ the judges gave Kessel and Radford a lower score, sending them off the ice and home.

Evora and Orr will continue in the competition next Thursday, October 3

The remaining pairs are: 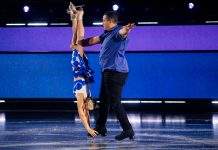