The Camosun Chargers Women’s Volleyball program is setting up for an exciting new season with 13 experienced returnees and four talented recruits making up the 2019-20 roster.

“We’ve got a lot of depth, so it will be challenging,” said Chargers Women’s Volleyball Head Coach Brent Hall. “Each player will be competing for time pretty heavily, but hopefully we can find a way to share it. We’ll see how it all shakes out.”

Last year, the Chargers netted a winning season, producing 16 victories out of the regular season’s 24 matches, despite a rash of injuries and the squad’s newcomers outnumbering the vets, ten to seven.

“We experienced an almost polar opposite situation this year,” said Coach Hall. “The only athlete that we lost from our starting line was Mychaela [Roelants] and it feels like there’s been a lot of continuity from the beginning of the season. The group understood our expectations right out of the gate and then it was mostly about bringing the rookies up to speed.”

Skilled at playing both the right and left side positions, Sydney Svicenec (UT), begins her fourth year having transferred to Camosun from Keyano (Fort McMurray) last season and making the move to Victoria from her home town in Spruce Grove, AB.

Third-year returnees include Correina McNeice (BSFL), who will take over as the team’s starting libero, and outside hitters Maddison Yule (BBA) and Rayelle Zacharuk (Criminal Justice), who will each vie for the starting position on the right side.

Returning to Camosun for their second season are three local athletes: Belmont grads, Olivia Godek (UT) and 2018-19 All-Rookie Team award recipient, Hannah May (UT), are joined by 6’1” middle, Bella McKimmie (UT) from Vic High. Godek moves from her original post on the left side to libero, while May moves from middle to the right side.

Three additional outside hitters are back for their second year with the Chargers. Included are Madyson Hautz (BSFL) from Regina, SK and fan-favorite, Mika Yamada (Ex Well), who hails from Sendai, Japan and was named 2018-19 PACWEST Women’s Volleyball Rookie of the Year.  Julia Kretzschmar returns to the squad, having healed from an injury which kept her off the court for the majority of the past season. With her eligibility reset, Julia appears on the roster as a first-year student-athlete.

Following a brief hiatus, Camosun BBA student Grace Kazanowski, is scheduled to make a come-back, but fans will have to wait until January 2020 to catch the 6’1” middle from Stelly’s (who is currently listed as a red shirt) hit the court.

The Chargers are excited to welcome four new players to the fold. Suiting up for their first season at Camosun are Rachel Leduc (College Prep) from Montreal, QC, Elly Simper (UT) from Campbell River, and Belmont grads, Taylee Pomponio (Criminal Justice) and Gracie May (General Studies). While Simper, Pomponio and May come to Camosun with impressive Beach resumes (Pomponio and May are former Team BC athletes), Leduc, is the youngest of the Chargers newcomers and the top recruit in her age group out of Quebec.

“In Quebec, students graduate and receive their high school diploma in Grade 11, so Rachel is a year younger than our other recruits,” commented Coach Hall. “You’d never know it though. She has lived all over the world and she’s not a stranger to being away from home.”

Having had several offers from post-secondary schools in her home province, Leduc will be a player to watch for over the upcoming PACWEST season.

The May sisters, Hannah (6’1”) and Gracie (6’3”), are also being looked to as impact players both in the conference and among Chargers fans.

“There’s a great potential that these two will be sharing the court,” said Coach Hall. “Gracie is starting with us having just won Bronze at Beach Nationals this summer, and despite offers from U Sports programs, Hannah made the decision to stay home and play her second year with the Chargers. Part of that decision, was the opportunity to play with her sister.”

With a roster teeming with players from the Island (six from Victoria), and a line-up that promises to be one of the best in the PACWEST, the Chargers are excited to begin showcasing their skills and entertaining fans with great volleyball over the next five months.

Catch the Chargers this Friday in their home opener as they take on the two-time defending CCAA National Champion, Vancouver Island University Mariners. Last season, Camosun took down the nation’s No. 1 ranked Mariners 3-1, in their final home game of the season and fans can expect another exciting battle as the two teams face off to claim this year’s first Island rivalry.

The action starts at 6pm at the Pacific Institute for Sport Excellence, with the rematch set for Saturday as VIU hosts Camosun in Nanaimo. 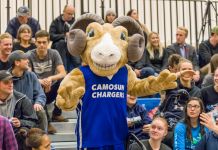 Camosun Gets Fans Charged up For a New Season!