Another two-goal game by British Columbia captain Brayden Schuurman powered the province to a 5-2 win over Manitoba and a 2-0 record at the 2019 WHL Cup Thursday.

The western-most province at the tournament went up 3-0 after the first period, but Manitoba cut the lead to a single goal midway through the third. Late in regulation, British Columbia scored twice to extend their lead back to three goals.

Defenceman Mats Lindgren opened the scoring 86 seconds into the first period. Goals from Brandon Lisowsky and Schuurman followed to give British Columbia a three-goal advantage heading to the middle period.

In the second, Carter Anderson brought Manitoba back into the game, cutting the deficit to two after 40 minutes. Denton Mateychuk’s third goal of the tournament would come midway through the third, but Manitoba couldn’t find the equalizer. Niall Crocker scored with 93 seconds left in regulation and Schuurman buried an empty-net goal to close out the contest.

Goaltender Kyle Kelsey stopped 34 of 36 shots for the victory. Six different skaters recorded a single assist for British Columbia in the contest. Tyson Zimmer had a pair of helpers for Manitoba in the defeat. 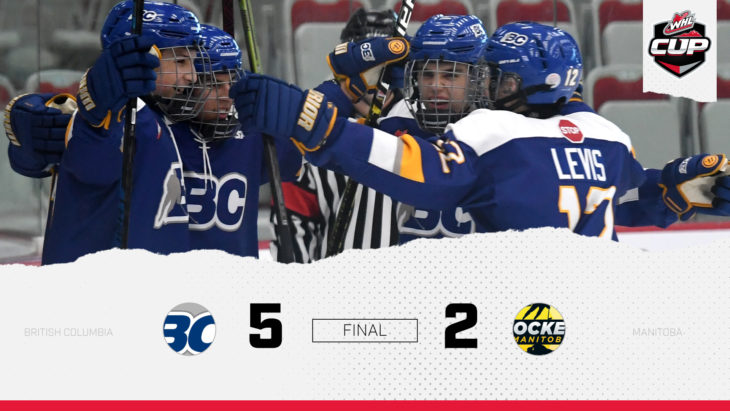 Alberta and Saskatchewan combined for five goals in a wild second period that saw the Wild Rose province earn a 3-2 victory to remain undefeated at the 2019 WHL Cup Thursday.

Kylynn Olafson gave Saskatchewan their second lead of the game minutes later, but Alberta had plenty of resolve to earn the victory.

Billal Noori tied up the game with 7:35 left in the second period and Rieger Lorenz put his province ahead for good 45 seconds later.

In net, Nicholas Jones saw his first action of the tournament, turning aside 23 of 25 shots for the victory.

Noori and Gourley each added an assist for the multi-point performance while three other Albertan skaters picked up helpers. Saskatchewan had three skaters pick up a single assist in the contest. 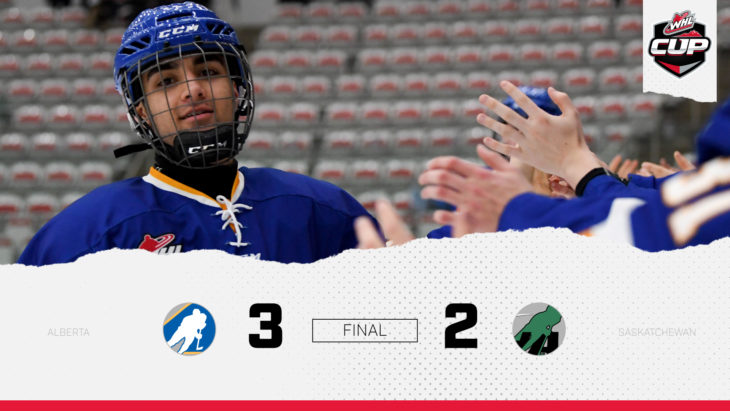 The final day of round-robin play will see teams slot themselves into home and away positions for Saturday’s semi-finals.

Quotes:
“I definitely thought my defencemen really helped me out there. They held my back.” – Kyle Kelsey, Goaltender, Team British Columbia

“I just picked the puck up, wheeled it, made a pass to one of our teammates. Cameron Johnson put a great pass over to me and I was lucky to put it in. – Mats Lindgren, Defenceman, Team British Columbia

“First period was kind of iffy. Good goal by B.C., couple good goals, but then I battled back in the second and third. This one kind of stings because the team played good.”– Ethan Buenaventura, Goaltender, Team Manitoba

“I thought the game went well. I thought we were executing our passes and getting pucks out of the zone, had a lot of chances, just a couple bad bounces and hopefully we get them back tomorrow.” – Carter Anderson, Forward, Team Manitoba

“I thought I was playing a lot simpler than yesterday. I got the game-winning goal; that was nice. Overall a good team effort today.” – Rieger Lorenz, Forward, Team Alberta

“We came out a little slow, but definitely came back and got some momentum. It ended up our way so it was good.” – Connor Gourley, Forward, Team Alberta

“I think I played pretty well. I couldn’t have done it without my teammates. They helped me limit the shots to good outside shots.” – Dylan Ernst, Goaltender, Team Saskatchewan

“We had lots of chances out there. We could’ve buried a couple more, but overall I think it was good.” – Tye Spencer, Forward, Team Saskatchewan