A three-goal first half was more than enough for the visiting University of British Columbia Thunderbirds to pull out the 4-0 win over the Saskatchewan Huskies in Canada West quarter-final action on Sunday afternoon.

“Really impressed with the team today, it would have been easy to roll over with these tough conditions but credit to the team, they bought in, were ready to roll and I’m really proud of them,” said Thunderbirds head coach Jesse Symons.

Playing in winter-like conditions, the Thunderbirds received goals from Amelia Crawford, Katalin Tolnai and Danielle Steer before halftime, with an extra insurance marker coming Anisha Sangha in the 80th minute.

With the win, UBC will move on to the Canada West Final Four, being hosted by the MacEwan Griffins in Edmonton, Alta. next weekend.

For the Huskies however, an outstanding season that saw them finish second in the Prairie Division with a record of 8-2-4 has come to an end.

“I think when we get over the disappointment of today we will be content with the growth we achieved this season,” said Huskies head coach Jerson Barandica-Hamilton. “I think today just wasn’t our day, we didn’t really have the ability to connect and stay calm, credit to UBC.

After a back-and-forth start to the game UBC took control in the 26th minute.

Amelia Crawford unleashed a shot from long-range that skidded on the frozen field and found its way into the back of the net.

The Huskies tried to counter immediately and could have evened the game if not for a nice stop by Emily Moore off a header from Payton Izsak.

After fending off the counter the vistors began to take back control of the game. They were rewarded for a long period of pressure when Katalin Tolnai gathered her own rebound and fired it past Jadyn Steinhauer just six minutes after their opening marker.

The Thunderbirds increased their lead just minutes before halftime. A beautifully played in ball from Jacqueline Tyrer was gathered by Danielle Steer and the striker made no mistake in burying the ball and sending the visitors into the break with a 3-0 lead.

Saskatchewan made efforts to work their way back into the game in the second half but the result was never really in doubt as the Thunderbirds were able to take the life out of the game en route to the 4-0 victory. 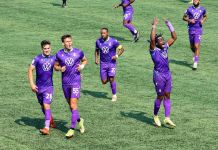