Following a day of A, B and C final races at Elk Lake, the Canadian University Rowing Association handed out their yearly awards and medals at the CARSA Performance Gym.

The Northern Pacific Senior Association of Oarsmen Trophy went to the University of British Columbia Thunderbirds men’s rowing team after they won the national championship for the sixth time with 110 points. The Trophy was first handed out in 1899.

On the women’s side, the Thunderbirds also won their third national title with a score of 115. The Challenge Cup they received was first handed out in 1893.

All the medal winners from today’s races received their medals during the banquet as well.

The Thunderbirds men’s eight boat won the A final today in a time of 5:31.39 and received the Book of Honours. The Book contains each national championship crew from the men’s eight race.

After winning the women’s eight A final in a time of 6:18.65, the University of Western Ontario Mustangs won the Jane Thorton Award.

There were ties for each Coach of the Year awards.

On the women’s side Bob Ward and Sara Black from the Mustangs shared the award with Mark Williams from the University of Toronto Varsity Blues.

Each year, the President’s Award is presented to an individual who has made a substantial impact in the development to the sport of rowing. The Vikes men’s head coach Aalbert Van Schothorst won the award this year.

The CURA Male Athlete of the Year Award went to Curtis Ames of the Mustangs.

Ames won gold in the men’s pair and silver in the men’s eight earlier this morning. He also rowed this summer with Team Canada on the eight boat at the World Championships.

The CURA Female Athlete of the Year Award went to Hayley Chase of the Laurentian University Voyageurs.

Chase won bronze in the women’s single this morning. She also won gold in the same event during the Ontario University Athletics conference championship earlier this fall. 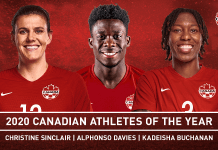