Five BC players were named to Canada’s senior women’s XVs roster travelling to California this week to face the USA in a two-game series. The BC players named to the team are no stranger to suiting up together – four of the players selected were teammates with BC Rugby’s Elite Youth Sevens program, an initiative to develop high-performance rugby players in BC.

Over the past few seasons, age-grade girls’ rugby has experienced a huge increase in popularity in BC and around the world, creating new opportunities for development and competitive play. There are over 2,000 girls aged 15-19 currently playing high-school rugby in BC, an increase of 60% from just three seasons ago.

To support this growing player base and further their development, the Elite Youth 7s performance program has been implemented. Initially piloted as a boy’s program in 2016, the Elite Youth 7s was implemented as a high-performance program for age-grade boys’ and girls’ rugby later that year. The work of coach Dean Murten and BC Rugby CEO Annabel Kehoe has made the girls’ Elite Youth 7s program a huge part of the development of elite women’s rugby players in BC, helped by the financial support of ONNI Group.

“With thanks to the investment from the ONNI Group and the Amarone Charitable Trust, we’re now seeing the positive impact that a focused program can have on player development,” said Kehoe. “With the growing number of girls coming to rugby and the continued support for this program, we’re aiming to support more players and continue to raise the standard of girls’ rugby in the province.”

Since its implementation, the program has provided a pathway for age-grade girls to train and gain competitive experience against strong opposition. These opportunities have built a foundation of success for BC’s next generation of women’s rugby players, and the program’s first group of alumni have begun to make waves in rugby all across the country.

Being selected to Canada’s senior women’s XVs side is the latest in a long list of honours and accomplishments for the first wave of the program’s graduates, alongside selections to U20 and U18 Canadian XVs teams, Canadian senior 7s and FISU 7s teams, as well as a swathe of accolades and awards at the university level.

Laura Pfleiderer was MVP of her conference in 2018 and was named Acadia University’s female athlete of the year. Lyric Atchison, a U Sport First Nations athlete from the Squamish Nation, received the Tom Longboat Female Athlete of the Year award for 2019, an award which recognizes Aboriginal athletes for their outstanding contributions to sport in Canada. Val Wideski, Berlyn Seselja and Emma Feldinger have all been named to conference all-star teams for their excellent U Sports play.

Last year’s U20 XVs side featured former Elite 7s teammates Wideski, de Goede, Levale, Carson, Brooke Bazian and Madison Gold. All in all, thirteen different players have been selected to the Canadian U20 woman’s XVs team over the past two seasons, all alumni of the Elite Youth 7s program.

Many of these players were also named to Canadian U18 XVs sides, as were program alumni Tanika Bonneville and Shaye Tudor, who has captained Canada’s U18s.

In sevens, Brooke Baizan represented Canada at the FISU Rugby 7s in Naples this summer, and Tausani Levale has been pulling double duty, representing Canada at the 7s level alongside her sister Nakisa in addition to XVs play.

“This group of dedicated female athletes, along with the opportunities they have received, have helped create a culture of success in BC and they have become role models for many of the younger athletes coming through the pathway,” said Girls’ Rugby Development Manager Darcy Patterson.  “This first cohort of Elite 7s athletes have pushed the boundaries while driving each other towards their goals on and off the pitch.”

Patterson believes the success of this new crop of BC-born women’s rugby players will be an inspiration to the next generations of girls’ rugby talent across the province. 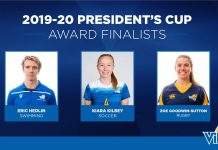