After dominating Group F in the first stage of the Davis Cup by Rakuten Finals, Canada enjoyed a well-deserved day off before returning to the courts on Thursday to take on Australia, the winner of Group D. In the end, it was the decisive doubles that propelled Canada into the semifinals, thanks to a 2-1 win.

For the third time in as many clashes, Pospisil got the tennis balls rolling for Canada. The 29-year-old overpowered John Millman (7-6(7), 6-4) to chalk up his third consecutive victory over a member of the Top 50. In the physically demanding first set, the World No.150 clawed his way back from 0-3 and two set points in the tiebreaker. In the second set, Pospisil earned his second break of the match at 5-4 to deliver Canada’s first point of the day.

“I was expecting to play Nick until an hour before the match, which is when the captains have to give their lineup. It took me five minutes to digest the news, and then I started focusing on my preparation,” confessed Pospisil. “I had to adjust my mentality on how I was going to play the match because they are two very different players.”

It was then up to Shapovalov to secure the nation’s ticket into the semifinals for the third time in its history. The World No.15 got off to a terrific start, relying on his offensive game to break his opponent at 2-1 and go on to win the first set 6-3. But De Minaur’s fierce sense of competition carried him back into the match and forced a third set in which he grasped the set’s only break point at 5-5 and served for the match. With the win (3-6, 6-3, 7-5), De Minaur kept Team Australia in the mix.

“I lost my concentration a little bit after playing a great first set. I think I also let my foot off the gas a little bit,” said Shapovalov. “But one the other hand, he also raised his level. He started serving much better. He played a great match and I felt like I was playing catch up for the second and third set. He deserves a lot of credit for the win, he was the better player today.”

A few minutes later, Pospisil and Shapovalov were back on Centre Court at Caja Magica to face John Peers and Jordan Thompson in doubles. The Canadians were raring to go. They locked in the first break point that gave them the first set. They got off to a rockier start in the second, falling behind 0-3, but played impressive tennis to neutralize the Australians and claim victory (6-4, 6-4) and send Canada to the semifinals.

“Going into the doubles, we had to make a decision. Félix being ready to go, we had many good options,” explained Pospisil. “Once we took the decision, we were ready to go on court and be very focus and intense from the first point. I thought Denis and I played great together tonight. We served and returned extremely well and I’m just happy we were able to do that in such an important match.”

“I’m extremely happy right now. It was a surreal week here. We had a great team, and I knew our players could beat anyone. But playing back-to-back matches like Vasek and Denis did is pretty incredible. It was physically and mentally demanding. And now, there’s no limit. With a bit of luck, we can go all the way,” declared Dancevic after all was said and done.

Today marked the teams’ first meeting since 1964. Canada and Australia had gone head-to-head on nine previous occasions in which Australia was undefeated.

Canada will play in the Davis Cup semifinals for the third time in its history and the first since 2013, when the squad was eliminated by Serbia. Canada could get a chance for a rematch, since the team will face the winner of the showdown between Russia and Serbia that will be decided today. The semifinal is scheduled for Saturday as of 4:30 a.m. EST. 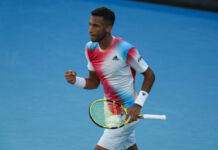