Hockey Canada has unveiled the 23 players who will travel to Slovakia to defend Canada’s gold medal at the 2020 IIHF U18 Women’s World Championship, scheduled for Dec. 26-Jan. 2 in Bratislava.

“We are excited about the group that will represent Canada next month,” said Kingsbury. “Our staff has done an excellent job evaluating the talent through several different events, including summer camp, the three-game series against the United States and the National Women’s Under-18 Championship. We are looking forward to getting underway in Slovakia, and we are confident this group has what it takes to defend our gold medal.” 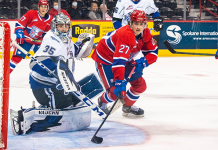