The first Cup final meeting between the two nations since South Africa triumphed 24-12 in the desert back in 2017, looked to be heading for a scoreless first half after Chris Dry knocked on in the act of scoring and then Zain Davids was held up over the line.

However, from the resulting scrum, and with only two seconds showing on the clock, South Africa swung the ball quickly left to create just enough space for captain Siviwe Soyizwapi to go over in the corner to earn some reward for the long spells they had spent in the All Blacks Sevens 22.

South Africa’s kick-off at the start of the second half was booted back with interest by Tim Mikkelson – playing in his 41st Cup final on the series – but Rosko Specman kicked and chased, forcing Kurt Baker to take the ball back over his line. From the resulting scrum, the Blitzboks kept possession and eventually worked Dry over on the left for a 10-0 lead.

The score remained that way until the final minute when Seabeloa Senatla scooped up the ball and sprinted away to wrap up a first victory over the All Blacks Sevens for almost a year.

HSBC Player of the Final Specman, like Senatla playing in his first series event since Cape Town last December, said: “The crowd in Dubai is amazing, they always come with the numbers whether it’s Fiji, New Zealand or South Africa and I’d like to say thank you to everyone – I hope we have made you guys proud this weekend.”

South Africa lead the standings after the first of 10 events in a season that culminates in the Tokyo 2020 Olympic Games in Japan with 22 points, ahead of New Zealand and bronze medallists England. Will Muir proved to be England’s ‘super sub’ in the bronze final against Samoa, scoring a mere 14 seconds after coming onto the pitch to secure a 19-14 win in a entertaining match.

Fiji finished ninth – their lowest ever placing in Dubai in series history – after scoring six tries in a 40-17 defeat of Canada, to give them eight points, 14 fewer than champions South Africa. Spain edged new core team Ireland for 11th place with Kenya finishing 13th and Wales 15th.

The teams now move onto Cape Town for round two of the HSBC World Rugby Sevens Series 2020 next weekend, where Fiji are the defending champions after beating USA in the final last year.

The battle for bronze was an end-to-end affair with no quarter given by either side. Tom Bowen and injury replacement Richard de Carpentier scored for England in the first half but Belgium Tuatagaloa set up two tries for Samoa to cut the deficit to 14-12. Totafu Solia scooped up a loose ball and ran in a long-range try to give Samoa the lead for the first time, but a yellow card for Elisapeta Alofipo proved costly with Muir scoring the winning try for the second match running.

The first semi-final between England and New Zealand was a cracker, settled only in the final minute when Salesi Rayasi gathered England’s restart and raced away to score the winner for the defending champions. Dan Norton had given England the lead to the delight of the crowd, but  Andrew Knewstubb touched down on the stroke of half-time to cut the deficit to two. Regan Ware gave the All Blacks Sevens the lead, only for Harry Glover to acrobatically dive over the line to tie the scores at 12-12.

Playing in their first Dubai semi-final since they won the title in 2012, Samoa enjoyed the dream start when Paul Scanlan burst through for the opening try. Unfortunately for Gordon Tietjens’ men, South Africa were in inspired form with Zain Davids, Dry, Soyizwapi, Ruhal Nel, Senatla and Selvyn Davids dotting down for an emphatic 38-7 victory.

Earlier in the quarter-finals, England and France were locked at 12-12 when the clock hit zero but just as extra-time looked likely Muir powered through an attempted tackle to break the deadlock.

USA reached every semi-final on the 2019 series to finish second behind Fiji, but they had no answer to defending champions New Zealand in the quarter-finals this time, the All Blacks Sevens establishing a 26-0 lead before Carlin Isles grabbed a late consolation score.

The third quarter-final was a much closer affair. South Africa led 12-0 at half-time after creating space for Justin Geduld to score the first and then Specman speeding away for the second. Matias Osadczuk gave Argentina hope but they couldn’t repeat the fight-back that had seen them stun Fiji a day earlier.

With the added motivation of honouring those affected by the measles epidemic back home, Samoa scored two second-half tries through Joe Perez to snatch a 19-14 victory over Australia, the second while they had a man advantage with Joe Pincus in the sin-bin for taking someone out in the air from the restart after his first try.

Defeat ended the tournament for France, USA, Argentina and Australia with the teams being ranked five to eight in terms of series points depending on their point differential. On this basis, Australia are ranked fifth ahead of France, Argentina and 2019 series runners-up USA.

With Fiji having missed out on the Cup quarter-finals for the first time in 21 years of the HSBC World Rugby Sevens Series in Dubai, they faced Canada for ninth place. Two yellow cards in the first half didn’t help their cause, although they still led 12-5 at the break. The game was still in the balance midway through the second half, but a burst of three quick-fire tries – two of them by Waisea Nacuqu – saw Fiji home 40-17.

Spain started the 11th place play-off with Manuel Sainz-Trapaga scoring twice in the opening five minutes, but Ireland hit back through Hugo Lennox. Sainz-Trapaga was denied a hat-trick score when he was stopped just short, but he found Juan Ramos in support only for Jordan Conroy to go 60 metres to make it 19-14 with 30 seconds to play. Conroy had a chance to win it, but he fumbled a cross-field kick and Spain heaved a sigh of relief.

Kenya, who had pushed South Africa so hard in their opening game on Thursday, proved too hot for Scotland to handle in the 13th place play-off with Johnstone Olindi and Alvin Otieno among the try-scorers in their 26-14 victory.

Wales also finished on a high with their first victory of the weekend, beating Japan 38-12 in the battle for 15th place with Rio Dyer scoring two of their six tries against the weekend’s invitational team. 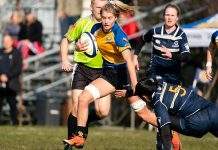