The Black Ferns Sevens were crowned the inaugural HSBC Cape Town Sevens champions after beating long-time rivals Australia 17-7 in the final on Sunday.

The success, their 24th in 40 events since the HSBC World Rugby Sevens Series began in 2012-13, follows hot on the heels of another historic victory in Dubai last weekend, when New Zealand became the first to win back-to-back titles in the desert.

New Zealand had not been at their best in the tournament, stuttering past Fiji and Russia in the pool stages and needing sudden-death extra-time to beat England in quarter-finals, but found the performances when they needed to overcome Canada and then Australia to win an inaugural event in a country for the sixth time out of 11.

The series champions had made the better start to the 16th Cup final meeting between the two most successful women’s teams, Kelly Brazier stepping her way through the Australia defence to score the opening try and pass through the 500-point milestone in the process.

Shannon Parry was then adjudged to have knocked on rather than blocked a Brazier kick and New Zealand capitalised, a strong run by Alena Saili creating the opportunity for World Rugby Women’s Sevens Player of the Year 2019 Ruby Tui to score their second try for a 12-0 half-time lead.

Australia, without a title since their record-breaking victory in Sydney in 2018, got back into the game within 40 seconds of play resuming, Ellia Green skipping past the diving Niall Williams to sprint away for her 130th series try, quickly adding the conversion herself to get her side back in the game.

The Olympic champions began to build some pressure but couldn’t find a way through and instead New Zealand wrapped up victory when HSBC Player of the Final Tui handed off Cassie Staples to score her second try.

“This crowd, this atmosphere, it’s incredible to be here in Cape Town for the very first time as a women’s team. To play South Africa, especially, in the very first game, it’s just amazing.

“I’m so proud of these girls. We didn’t start the tournament how we wanted to but we finished it doing what we wanted to do. These last two weeks have just been everything, the girls have worked so hard and we pulled through in the end.”

New Zealand sit top of the standings after three of the eight rounds with 56 points, six more than Australia with USA third on 48 points after finishing fifth in Cape Town.

Canada are in fourth, with 44 points, after beating fifth placed France in sudden-death extra-time to win the bronze medal and avenge their loss in the Pool B decider the day before.

The series resumes in Hamilton with the inaugural HSBC New Zealand Sevens series event for women on 25-26 January, followed by the HSBC Sydney Sevens a week later.

Julia Greenshields scored the golden try more than three minutes into sudden-death extra-time to give Canada a 22-17 victory over France in the bronze final. The Canadians had battled back from 17-7 down early in the second half with tries from Kaili Lukan and Bianca Farella tying the scores, the latter while France were a player down with Joanna Grisez in the sin-bin for hair-pulling. Greenshields, Canada’s match-winner against USA in the quarter-finals, had a chance to win the match in normal time, but missed the conversion from out wide.

The second semi-final had been a repeat of the Dubai title decider and this time it was New Zealand who scored first, a turnover leading to Saili going over in the corner. Canada then lost Karen Paquin and Caroline Crossley to the sin-bin within 30 seconds of each other and Williams ensured New Zealand made the most of their advantage for a 10-0 half-time lead. Brazier cut inside Paquin to run in a third try for the Black Ferns Sevens, who did concede a try to Farella late on to triumph 15-5.

Only one of France’s previous 13 semi-finals had led to a Cup final appearance – in Kitakyushu in 2018 – but Chloé Pelle’s try gave them a 7-5 lead early on against Australia. The Olympic champions, though, hit back with two quick tries, Green’s record 129th series try for Australia and Jakiya Whitfield’s effort to be in control at half-time. Les Bleues weren’t done yet, battling back to lead by two with tries by captain Fanny Horta – her 50th on the series – and Shannon Izar, but Rhiannon Byers raced away for the winning try and a second Cup final of the season for Australia.

Earlier in the quarter-finals, France produced a dominant performance in the day’s opening match, barely spending long periods camped in the Russian 22 and not allowing their opponents time on the ball to build phases. Joanna Grisez impressed with some powerful runs and scored France’s first, before Izar doubled the lead to 14-0 at half-time. Some good handling by France created a try for Pelle with Grisez scoring her second try late on for a 31-10.

The second quarter-final was a much closer affair, Fiji offloading at will before Asinate Savu crossed in the opening minute and they should have scored again but Emma Tonegato saved Australia with a cover tackle. Australia, though, hit back with two tries late in the first half through Cassie Staples and Faith Nathan for a 14-7 lead. Fiji fell off too many tackles after the break with Nathan, Staples and Whitfield ending the 38-7 win with two tries apiece.

USA had won their two meetings with Canada this season, in the Glendale quarter-finals and pool stage in Dubai, but tries from Brittany Benn and captain Ghislaine Landry gave the Canadians a 12-7 lead at half-time. Alev Kelter stepped Paquin to score her second of the match with the conversion edging USA ahead. However, Canada weren’t to be denied, Greenshields choosing the perfect time to score her 50th series try to clinch a 15-14 win over their closest rivals.

England had lost 15 series matches in a row since beating New Zealand in the Langford Cup final in 2016, but led 14-7 at half-time after tries by captain Abbie Brown and Amy Wilson Hardy, the latter while a player down with Deborah Fleming in the sin-bin. Wilson Hardy scored her second after slipping past Tui, but the Black Ferns Sevens were in no mood to suffer only a fifth ever quarter-final loss, forcing sudden-death extra-time with Nathan-Wong and Tui tries. They held their nerve then with Youth Olympic Games gold medallist Mahina Paul, in her debut tournament, scoring the winner after rounding her marker.

Defeat ended the tournament for Russia, Fiji, USA and England with the teams being ranked five to eight in terms of series points depending on their point differential. On this basis, USA are ranked fifth ahead of Fiji, England and Russia.

Spain, disappointed to miss out on a fifth successive Cup quarter-final on points difference, bounced back to finish ninth, beating hosts South Africa 19-7. Las Leonas captain Barbara Pla had opened the scoring before Olivia Fresneda sliced through a gap for a 12-0 half-time lead.

Zenay Jordaan burst through the defence and looked certain to score the try the South African crowd were desperate for, but Maria Garcia hauled her down and then proved a try-saver again when she hauled Megh Phillips into touch before she grounded the ball.

The Imbokodo did finally get over the line when Liske Lategan went round the outside, but Patricia Garcia made sure of victory for Spain when she shrugged off Jordaan and accelerated away for her side’s third try.

Amee-Leigh Murphy Crowe and Leila dos Santos Silva traded tries early in the 11th place play-off, but once Louise Galvin edged Ireland back ahead the outcome was didn’t appear in doubt, Eve Higgins and Galvin adding further tries as the Irish picked up their first win of the weekend, 26-7. 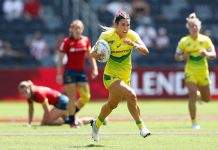 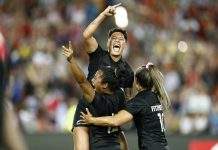