Alexa Scott of Clandeboye, Man. and Frank Roth of Calgary, Alta. were crowned Canadian Junior Long Track Champions this past weekend in Calgary at the national championship presented by Intact Insurance. The overall titles earned them each a spot on the ISU World Junior Championships team, where they will be joined by a minimum of three additional skaters per gender.

The results from the 2020 Canadian Junior Long Track Championships will be used to select the team who will compete at the ISU World Junior Speed Skating Championships in Tomaszów Mazowiecki, Poland from February 21-23, 2020. The final list of athletes representing Canada at this event will be released in the coming weeks. 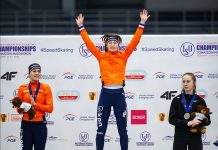