For the third consecutive season, the Raiders will be hosting WHL Suits Up to Promote Organ Donation Presented By RE/MAX Night.

This year, the Raiders will face off against the Medicine Hat Tigers as the home team wears Hockey Night In Canada themed sweaters on Saturday, January 25.

The jerseys are cream-coloured with green and black stripes. The centre of the jersey features the retro Hockey Night In Canada logo, as well as the new Kidney Foundation logo on the front of the collar and both sleeves. The Raiders logo and the RE/MAX logo will be featured on the shoulders of the jerseys. 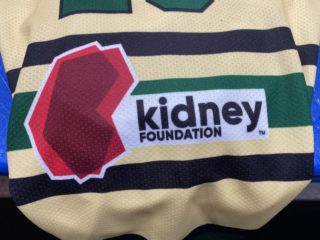 The Raiders and the WHL will also be spreading awareness for “The Logan Boulet Effect.” Boulet, who passed in the Humboldt Broncos bus crash on April 6, 2018. He had previously made the decision to sign his organ donation card, which provided the gift of live to others and sparked a national movement for organ donation registration.

This year’s WHL Suits Up jerseys will feature “The Logan Boulet Effect” on the inside of the collar. The Raiders will also be wearing special helmet decals to create awareness for “Green Shirt Day Presented By Vista Corporate Solutions in Partnership with Global News and Canada’s Organ and Tissue Donation Community.” 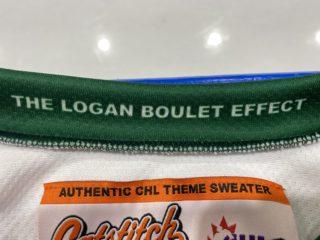 As always, the jerseys worn by the Raiders on the ice will be available for auction through 32auctions.com with 100 per cent of the proceeds raised going towards local chapters of the Kidney Foundation. The auction will begin on Monday at Noon CST. Bidding will begin at $250 with a minimum bid increment of $15. Jerseys will also be available for a buy now price of $400.

The online portion of the auction will close at 11 p.m. CST on Friday, January 24. Any jerseys not bought outright will carry on to a live, silent auction on WHL Suits Up to Promote Organ Donation Presented By RE/MAX Night on Saturday, January 25. The auction will then conclude at the five-minute mark of the third period.

Jerseys will be available for pickup on Tuesday, January 28. A $15 charge for shipping will apply for jerseys that aren’t able to be picked up.

Through the first two years of the event, the WHL and its teams have raised more than $460,000 for the Kidney Foundation.

The Kidney Foundation will be in the Johnny Bower Lobby to build awareness surrounding the importance of organ donation, to field questions, and provided those interested with information on how to donate.