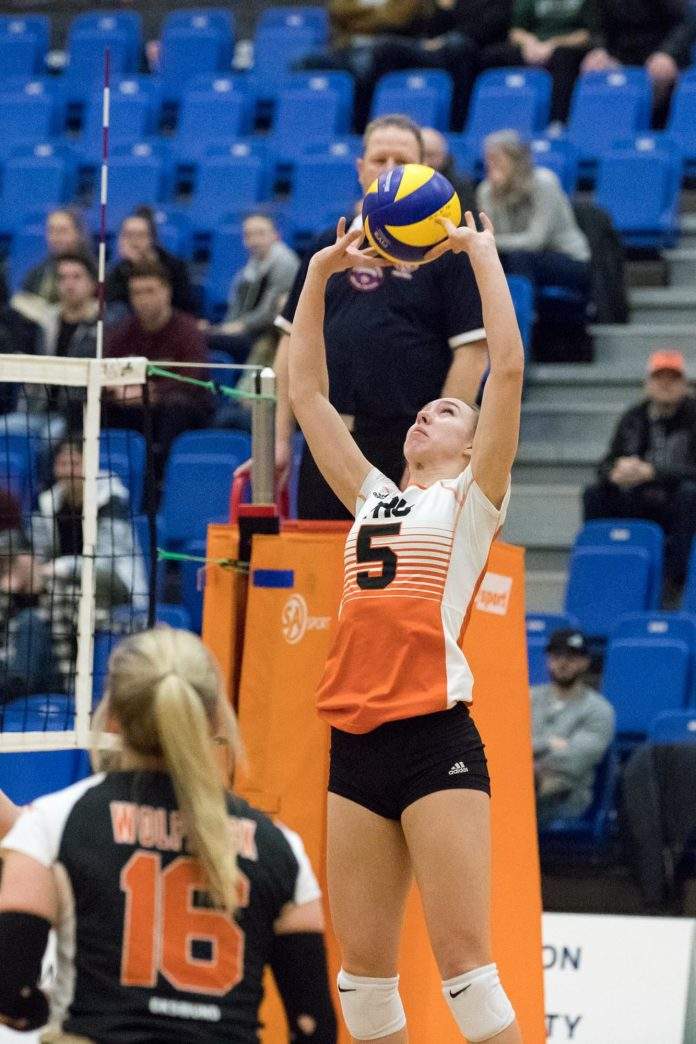 Friday night has proven to be a challenge when trying to get a win this year for the Thompson Rivers University WolfPack women’s volleyball team.  And this Friday (Jan 24) was no different as the WolfPack battled the visiting University of British Columbia Okanagan Heat at the Tournament Capital Centre.

The victory moved Thompson Rivers to 13-5 on the year while UBCO fell to 6-11.

The win also secured the  2019-20 President’s Cup series. It is a battle between Thompson Rivers and the University of British Columbia Okanagan in all Canada West sports: soccer, basketball, cross country and volleyball.  The Pack captured the women’s title for a second straight year with three wins, two losses and a tie.

Offensively, Thompson Rivers was led by Kendra Finch (5th year, outside hitter, North Vancouver, BC). She had 16 kills in 36 chances with three service aces and 12 digs.

This was also the WolfPack’s “You Can Play” Awareness game.  Officials with the Kamloops PRIDE committee had an informational booth set up at the Tournament Capital Centre and they were honored between sets.

The WolfPack got  off to a great start and were up 8-3 when UBCO head coach Steve Manuel called a time out to have a chat with his team. Whatever he said worked. The Heat went on a 6-0 run to tie things at nine.  Natalie Livingston (3rd year, outside hitter, Kelowna, BC) was serving during that run and dished up a pair of aces.  Chad Grimm, the TRU head coach called a time out to try and ‘ice he server’. It paid off as after the break TRU scored to take a brief lead 10-9.  The Heat responded to tie and eventually lead 16-13 going into the tech time out.  The WolfPack pulled off their patented double sub bringing in Morgan RIgelhof (4th year, outside hitter, St. Albert, AB) andSpratt  which resulted in  a couple of kills and TRU cutting the deficit to 18-17.   The Heat took the opening set 25-21 on a kill by  Lacava . She led UBCO with seven kills in 14 chances   Kocyigit had three kills in five chances for TRU.

The Pack were inspired in the second set.  They jumped out to a 4-1 lead and were up 7-3 when UBCO called a time out. Unlike the first set, TRU bent but didn’t break and thanks to kills from  Finch and  Savenchuk, they led 10-4 and were up 16-11 at the tech time out.  Savenchuk made a number of key kills and blocks in that second stanza as TRU evened the match taking the set 25-19  She had four kills, two digs and two block assists in the set.

In the third, the teams traded points until UBCO went up by three (8-5) thanks to some tough serving again from Livingston.  After being down by as much as three (13-10), the Pack tied it up thanks to kills from Kocyigit and Gabriela Podloski (4th year, outside hitter, Grande Prairie, AB) and a little dump by  Spratt .    A Heat time out did nothing to phase the Pack whose tips and rolls worked to their advantage as they took a 16-14 lead into the tech time out.  The Heat came back and tied it up at 25. A kill by Kocyigit gave TRU a 28-26 victory and a 2-1 advantage in the match.

The fourth set was dominated by the home team. Finch’s kill (giving her 14 scoring points at that time), gave TRU a commanding 11 point lead at the tech time out (16-5).  With TRU up 24-6, UBCO went on a mini run before committing a service error to give the Pack a 25-9 victory and the match 3-1.