Team Brown from Kamloops are the new 2020 BC Scotties champions.

Wark, third Kristen Pilote, second Carley Sandwith and lead Jen Rusnell, were behind for much of the game until they got three in the 8th and a steal of one in the ninth to lead 7-5. But the Brown team rallied to score two in the 10th to tie up the game and bring it to the extra end. Wark had hammer but was forced into a difficult shot and wasn’t able to make it, giving Brown the point and the win.

Corryn Brown said: “I feel incredible. I’m so proud of the girls. They played unreal all week and I’m really glad we were able to finish it off. We kind of let our foot off the pedal and gave up a three and then a steal after that we were able to pull it together, get the deuce in 10 and steal the extra.”

Team Brown will now represent the province in Moose Jaw, Saskatchewan, for the Canadian Scotties Tournament of Hearts from Feb. 15-23, with the winner of that representing Canada at the World Women’s Curling Championship in Prince George.

Defending champions Team Cotter, from Vernon and Kelowna curling clubs, with skip Jim Cotter, third Steve Laycock, second Andrew Nerpin and lead Rick Sawatsky, will be up against Team Tardi from Langley and Victoria curling clubs. This is the first provincial men’s final for the Tardi rink of skip Tyler Tardi, third Sterling Middleton, second Jordan Tardi and lead Alex Horvath, however they all have gold medals from world junior championships. 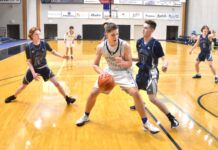 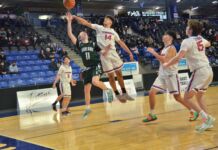 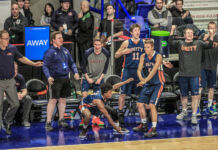