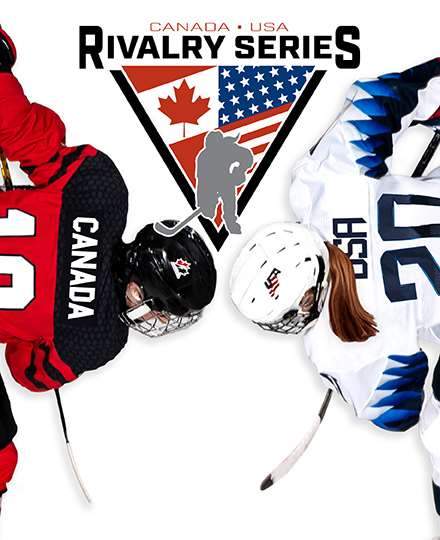 VANCOUVER, B.C. – Jocelyne Larocque (Ste. Anne, Man.) got Canada’s National Women’s Team even midway through the first period, but that would be it for offence in a 3-1 loss to the United States on Wednesday night in Game 4 of the Rivalry Series.

The game was the third and final Canadian leg of the series, with a 3-2 overtime win Monday in Victoria, B.C., sandwiched around losses in Moncton, N.B., in December and Vancouver.

The U.S. got on the board first when Dani Cameranesi banked a shot off Canadian goaltender Emerance Maschmeyer (Bruderheim, Alta.) and in just past the eight-minute mark, but Larocque jumped in off the blue-line and finished a pretty feed from Mélodie Daoust (Valleyfield, Que.) only 3:21 later.

It was just the second goal in 62 career games against the Americans for Larocque.

The second period was all about penalty killing; the teams combined to take seven minor penalties in the middle frame, with the Canadians going goalless on three power-play chances and the U.S. finishing 0-for-4.

Hayley Scamurra finally solved Maschmeyer eight minutes into the third period, taking a pass from Hilary Knight and snapping a quick shot to the short side.

Canada buzzed in search of the equalizer, but Knight found the empty net with 1:50 left to finish the scoring.

“We didn’t do a great job of getting pucks to the net. I think we possessed it well and had a lot of offensive zone time, but we weren’t generating pucks to the net as much as we needed to. Against the Americans you have to get dirty goals and you have to put pucks on net and battle and we weren’t great in that area. The coaches will show us the video and we’ll work on it in practice, so we’re all looking forward to the game in Anaheim.”

–        Larocque on the offensive execution

“Our primary goal was obviously to win the Rivalry Series, but I think when that doesn’t happen you quickly resort to your secondary goal which is preparation for worlds. I don’t think it changes anything mentality-wise, you just change your focus a little bit. This is still a great opportunity and there will be a great atmosphere in Anaheim, so just looking forward to the preparation for worlds.”

It was the first game for Team Canada at Rogers Arena since the gold medal game of the 2010 Olympic Winter Games, a 2-0 win over the United States. Three of the Canadians who were part of that Olympic contingent were in the line-up Wednesday – Rebecca Johnston (Sudbury, Ont.), Meaghan Mikkelson (St. Albert, Alta.) and Marie-Philip Poulin (Beauceville, Que.).