Canada are one of 20 nations competing in the expanded 2020 Concacaf Women’s Under-20 Championship in San Cristobal and Santo Domingo, Dominican Republic. With three group matches in five days from Saturday through Wednesday, Canada will build on a positive start to the competition with the goal of capturing one of only two Concacaf spots available for the FIFA U-20 Women’s World Cup Costa Rica and Panama 2020.

“The team has been training well and we are excited for the Concacaf Women’s Under-20 Championship,” said Rhian Wilkinson, Canada Soccer’s Women’s U-20 Coach. “These Concacaf tournaments provide our youth players with an opportunity to play with greater expectations and under greater pressure. We have set a goal to qualify through Concacaf to both FIFA youth tournaments in 2020, although we know it will be challenging under the new format.”

Every Canada U-20 match will be broadcast live in Canada on OneSoccer.ca with the opening match also broadcast on youtube.com/onesoccer. Fans will find extended coverage across Canada Soccer’s digital channels on Facebook, Youtube, Instagram and Twitter featuring the social media hashtags #canw20 and #CU20W.

“The players are good enough to do very well in this tournament,” said Wilkinson. “When they play to their ability, even through a challenging format with seven matches across 16 days, they are a team with incredible potential. We look forward to seeing them strive in the pressure of a Concacaf tournament as they continue to progress towards the Women’s National Team.”

With only two (not three) nations qualifying through Concacaf in 2020, two-time winners Canada could face the five-time winners USA in a Concacaf elimination match for a spot at a FIFA women’s youth tournament for just the second time ever if USA finishes either first or third in Group C (facing Cuba, Dominican Republic and Honduras). Only in 2010 have the two nations met under such pressure with Canada ultimately qualifying for that year’s FIFA U-17 Women’s World Cup through kicks from the penalty mark.

This year’s Canada U-20 squad features players born 2000 or later, all of whom have benefited from playing experience in Canada Soccer’s Women’s EXCEL Program at the youth level. From the squad, 17 have participated in previous Concacaf or FIFA youth tournaments in recent years.

“We can see that our system, the Canada Soccer Regional Excel Program, is working better than ever in delivering a connected and unified system and ensuring that there are more opportunities for our young players to be seen across the country,” said Wilkinson. “The whole program is connected and that is an important contribution to the Women’s National Team Program.”

CANADA WNT RETURN HOME IN APRIL
Canada Soccer’s Women’s National Team will come home this Spring when they face Australia in Vancouver on Tuesday 14 April. The home international soccer match will provide Canadian fans will an opportunity to see their favourite players live in action at BC Place (19.30 local kickoff).

Tickets to the Canada-Australia match are on sale now starting as low as $20 via Ticketmaster.ca (or by calling 1.855.985.5000), with complete information available via CanadaSoccer.com/tickets. Group discounts of up to 30% off the regular price are available for orders of 10 or more tickets using the Group Order Form. A special Me+3 ticket package can be purchased directly via Ticketmaster.ca.

Canada are two-time Olympic bronze medal winners (2012 and 2016) and two-time Concacaf champions (1998 and 2010). Canada have qualified for seven consecutive editions of the FIFA Women’s World Cup™ (1995 to 2019) and four consecutive editions of the Women’s Olympic Football Tournament (2008 to 2020). At Rio 2016, Canada Soccer’s Women’s National Team were the first Canadian Olympic team to win back-to-back medals at a summer Olympic Games in more than a century. 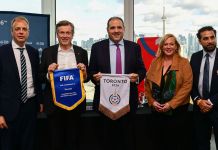