The Victoria Royals defeated the Kelowna Rockets 4-3 in a shootout on Saturday. The Royals were hosting their a9th ‘pink in the rink’ annual event in front of a sold-out crowd. The first period started quickly with Kelowna finding the back of the net first when Kyle Topping netted his 10th of the season with assists from Trevor Wong and Pavel Novak. The Royals went on to tie it seven minutes later when Tarun Fizer got loose on a breakaway and scored picking up his 17th unassisted. The Rockets would score again in the dying seconds of the first period as Trever Wong picked up his 5th assisted by Novak and Topping.

Kelowna went on to score another goal in the second which was reviewed for goalie interference but the call on the ice stood as Elias Carmichael scored his first of the season with assists from Alex Swetlikoff, and Dillon Hamaliuk. Victoria scored late in the second period as Brayden Tracey scored his 19th goal of the season with assists from Kaid Oliver and Gary Haden making it a 3-2 game for Kelowna.

Tracey scored again for Victoria only 19 seconds into the third period picking up his 20th with an assist from Mitch Prowse. Neither teams would score in the 3rd nor the overtime period, which resulted in the game going to a shootout.

Adam Evanoff stopped 33 out of 36 shots in the Royals win while Roman Basran stopped 34 out of 37 for the Rockets. The three stars of the game were Brayden Tracey at first star, Kyle Topping taking second, and Mitch Prowse at third. 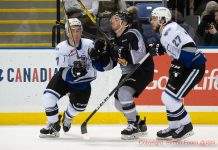 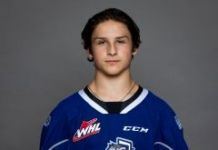 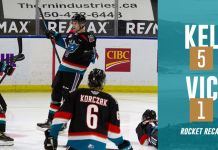