Laurent Dubreuil was crowned vice-champion at the ISU World Sprint Speed Skating Championships on Saturday in Hamar, Norway. The silver medal puts him among elite company as only the fourth Canadian to reach the men’s podium in the events 50 year history.

The 27-year old from Lévis, Que., whose previous career best was a sixth-place finish in 2017, joins long track legends Jeremy Wotherspoon (9), Gaétan Boucher (5) and Mike Ireland (4) as the only Canadians to earn World Sprint Championship medals since the event was established in 1970. Dubreuil’s silver medal is Canada’s first since Wotherspoon won one of the same colour in 2008.

Calgary’s Kaylin Irvine finished the competition as the top ranked Canadian women, earning a career-best ninth place result. Heather McLean (Winnipeg, Man.) was 15th and Abigail McCluskey (Penticton, B.C.) was 21st, while David La Rue (Saint-Lambert, Que.) did not skate on Saturday, dropping him out of contention for the men’s title.

“My two 500m and my 1000m today were exceptional races for me. I was able to manage everything around me to finish second at the World Sprint Championships, my favourite competition and the hardest and more stressful competition of the season, by far. It’s been quite a season so far, with second overall here and my third career world championship medal! I’m excited for next weekend!”

“I am really happy with my races. I didn’t have the best night of sleep. We finished racing late last night and woke up early this morning, which combined with he stress made for a tough night. But I knew it wouldn’t affect my races today. The 500m wasn’t easy. I was paired with [Tatsuya] Shinhama, who finished second to me yesterday, but I knew he was going to come out hard. He was on the outside and had a better start than me. I raced essentially the same race as yesterday and it put me in second. After that, we were fairly well positioned for him to finish first and me to finish second overall. I didn’t want to race defensively in my last race, I wanted to be aggressive and challenge him. I gave it my all and finished much better than yesterday.” 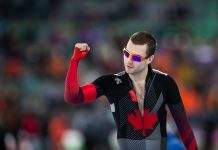