It is now mid-April, a time when track and field athletes alike usually look begin their seasons. For Andre De Grasse it would have been no different this year. Yet the reigning world silver and bronze medallist is at home like many of us as the sports world, and everything else in general, has been postponed.

De Grasse is remaining positive. With every day that passes, his motivation and drive to get back onto the track only gets stronger.

“I’m super motivated for when the season starts back up, I’ll be ready to go and excited all over again,” De Grasse says. “It’s pretty cool now, with the Olympics and then the back-to-back World Championships.”

“I’m trying to have a good mindset for myself, eventually I’ll get back to doing what I love,” De Grasse adds. “For a lot of us, I think we won’t take it for granted during those days when we’re like ‘I’m so tired, I don’t want to go to work, go to training, now because of our love for it.”

Coming off a silver and bronze medal performance at the Doha World Championships in October, the 25-year-old took the early months of the year to continue to recover, sitting out of the indoor circuit before the season was postponed.

As the days go by, De Grasse remains active and is trying to stay in shape. Running around the neighborhood and doing circuits at home, it is a change of scenery for the 3x Olympic medallist, but he doesn’t mind missing some time on the track if that means being able to spend more time with his family while also catching up on a lot of things that he hasn’t been able to do in a while.

“Right now I’m spending a lot of time hanging out with the kids, making them learn new things, catching up with friends and family, seeing how they’re doing,” De Grasse says. “I’ve been busy with the kids, taking them swimming, been going out on walks, teaching them how to ride a bike and I’ve been on my hoverboard and skateboard the other day, been a while since I was on those.”

Giving back to the community

With the talent and accolades that he’s accomplished throughout his career, De Grasse has been able to use that to give back to the community.

Starting the Andre De Grasse Family Foundation in 2018, he has been able to help and fund upcoming athletes as they continue to develop. For De Grasse, that motivation to give back came early on in his career.

“When I look back, it started in 2013 when I went to the Pan American Junior Games.” De Grasse recalls. “I think it was like $3000 to go and my parents didn’t have that kind of money to send me. Tony Sharpe helped me and found a sponsor, but to be able to go, I said to myself I had to make these people proud.

“I thank those people for that opportunity and I knew that a lot of people were in my shoes, so if I had the opportunity to help someone I wanted to be able to do that. That’s where the Andre De Grasse Family Foundation came in to not just help one kid, but maybe 10-20 kids. That’s where it all came from. If people can realize I had the talent [to sponsor me], then for these other kids, if they have the opportunity, they can do that too.”

After a three medal Olympic debut at the Rio Olympic Games back in 2016, with the Tokyo Olympics now postponed to 2021, De Grasse believes it will only give him more time to get stronger, faster and more prepared for his second Games.

“In my first Olympics, I didn’t really know, everything was different,” recalls De Grasse. “I just have to use my experience to do certain things, know what the setup is like, how much time I have to warm-up, time-zones. I’m not a rookie anymore so hopefully I shouldn’t be nervous but you never know.”

The Tokyo Olympic Games are now scheduled to take place on July 23 to August 8, 2021. With everything postponed until further notice, De Grasse’s goal remains the same as he looks to earn the elusive gold medal at the Olympic Games. Until then, the Canadian 200-metre record-holder shared his encouragement and support for everyone.

“This is a rough time for some people but continue to lean on your loved ones, support each other, follow the local guidelines, wash your hands, social distance. We’ll get over this pandemic, we just have to continue have faith and be strong, before we know it, everything will be back to normal.” 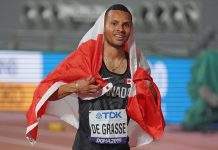