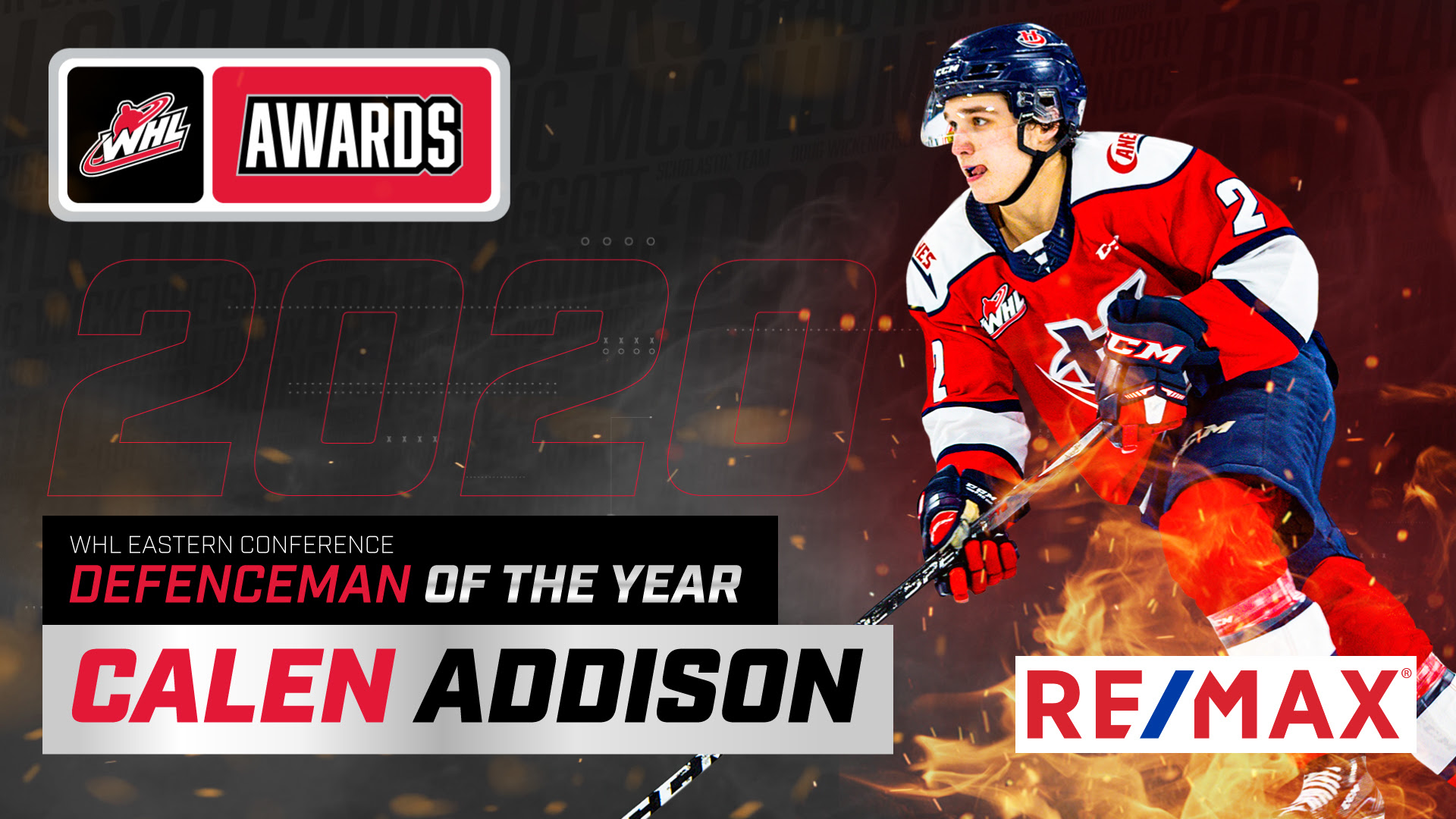 A 5-foot-10, 180-pound blueliner, Addison posted 14 multi-point games throughout the season, including the first hat trick of his WHL career on November 23, 2019, and a five-assist game on January 24, 2020. During the season, Addison cultivated an 11-game point streak with 19 points (3G-16A) over that span. The 2019-20 season marked Addison’s third-straight season of attaining double-digit goals, 40-plus assists, and 50-plus points.

An alternate captain of the Hurricanes, Addison also oversaw a defence that allowed just 193 goals through 63 games and were on pace to allow their fewest amount of goals as a team since the 2007-08 WHL Regular Season.

Earlier this month, Addison was named to the WHL Eastern Conference First All-Star Team. Selected in the second round, 53rd overall, of the 2018 NHL Draft by the Pittsburgh Penguins, he was acquired by the Wild in February 2020. 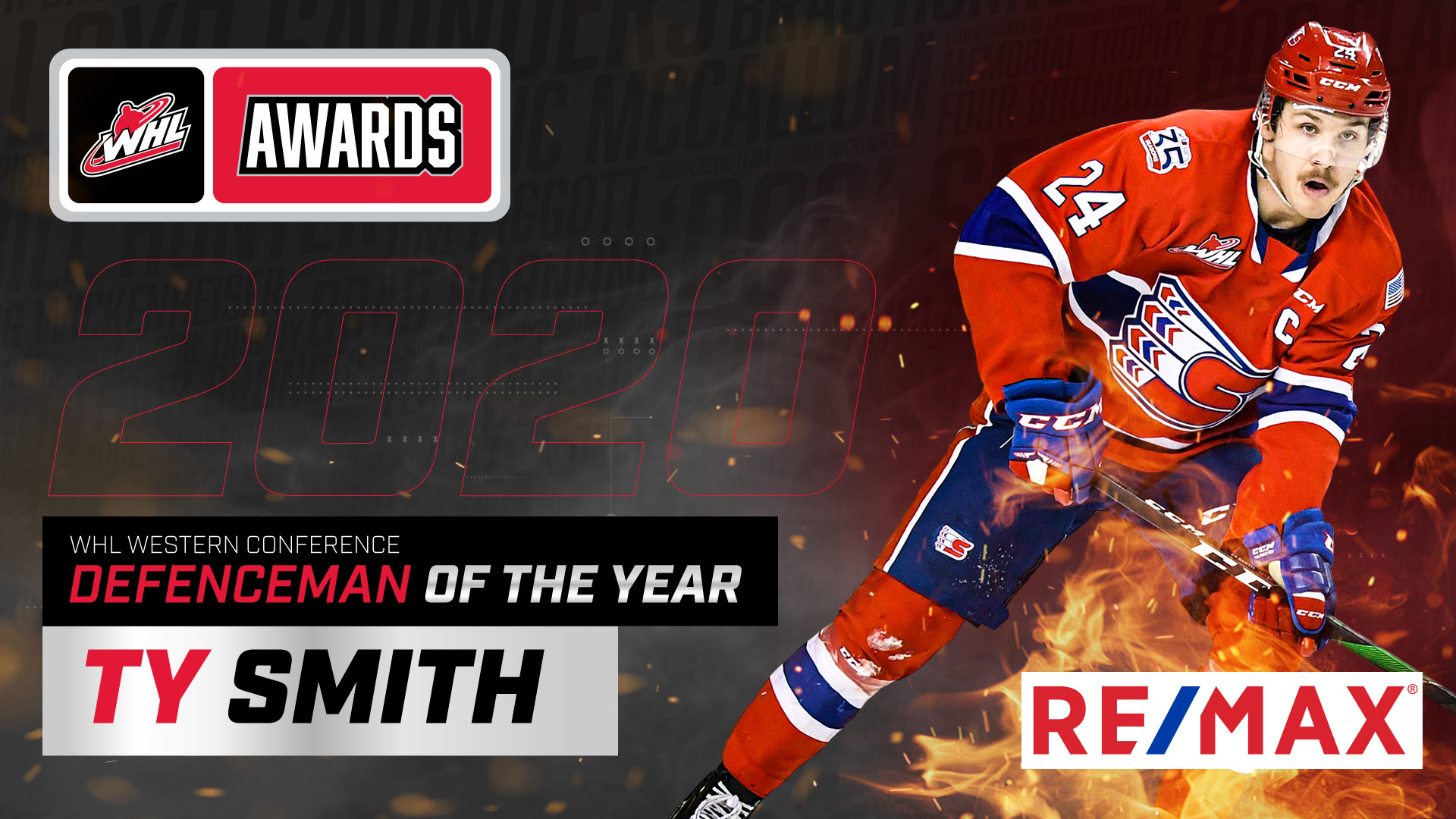 Western Conference – Ty Smith (Spokane Chiefs)
A 20-year-old prospect of the New Jersey Devils, Smith once again captained the Chiefs while anchoring the blue line of the U.S. Division Club. Smith recorded 59 points (19G-40A) in 46 games, including three power-play goals and one game-winning goal, to rank fourth in scoring among all WHL defencemen.

A 5-foot-11, 175-pound product of Lloydminster, Alta., Smith tallied 16 multi-point games throughout the season. His top single-game performance came on February 28, 2020 as Smith recorded eight points (3G-5A) to break his own franchise record for points in a single game by a defenceman. The performance also marked the first hat trick of his WHL career.

With Smith at the helm of their defence, the Chiefs allowed 179 goals through 64 games this season and were on pace to allow fewer than 200 goals for the first time since the 2010-11 WHL Regular Season.

The first-overall selection from the 2015 WHL Bantam Draft, Smith has been a consistent presence for the Chiefs. In 240 WHL regular season games, he’s recorded 235 points (45G-190A), including 13 power-play goals and eight game-winning goals. He’s also posted 16 points (3G-13A), including one game-winning goal, in 22 WHL playoff games.

Earlier this month, Smith was named to the WHL Western Conference First All-Star Team. The Devils chose Smith in the first round, 17th overall, of the 2018 NHL Draft.

The Bill Hunter Memorial Trophy recognizes a WHL defenceman who has demonstrated the best all-around ability at his position during the WHL Regular Season.

Born in Saskatoon, Sask., Hunter is honoured for his role in the establishment and sustained success of the WHL. Dedicated and enthusiastic to growing Major Junior hockey, Hunter served as the Owner, General Manager, and Coach of the Edmonton Oil Kings in addition to being a co-founder of the league.

Along with long-time friend, the late Scotty Munro, the pair helped to lead the league’s growth through its formative years.

WHL Eastern and Western Conference Defencemen of the Year are voted upon annually by WHL General Managers and Head Coaches. The winner of the Bill Hunter Memorial Trophy for WHL Defenceman of the Year will be announced on Tuesday, May 19.