The Blazers had 10 picks in the first six rounds and selected five defensemen and five forwards.

In the first round, 19th overall the Blazers selected defenseman Kaden Hammell from Langley, BC. He played with the West Vancouver Bantam Prep program.

In the second round, 27th overall the Blazers took forward Grayden Slipec from Surrey, BC. He played with Hammell in West Vancouver last season.

The Blazers had two picks in the third round and selected forward Luke Korte and defenseman Ryan Michael. Korte is from Saskatoon and played for West Vancouver and Michael is from Langley and played for the Yale Bantam Prep program in Abbotsford.

Two more selections in the fourth round as the Blazers picked forward Emmitt Finnie from Yale Bantam Prep and defenseman Rylan Pearce from Martensville, SK.

In the fifth round, the Blazers went to Alberta to pick Kai Matthew from Edmonton who played for the Northern Alberta Xtreme Bantam Prep.

The 10 players selected in the Bantam Draft join the Blazers two selections from the 2020 U.S. Prospects Draft in forward Drew Stewart from Minnetonka, MN and goaltender Calvin Vachon from Redondo Beach, California as 12 players from the 2020 draft class.

In total from the 2020 WHL Bantam Draft, the Blazers selected four players from B.C., one from Alberta, two from Saskatchewan, one from Manitoba, one from Minnesota and one from California.

Below is a synopsis on each player with a quote from Director of Player Personnel, Robbie Sandland.
Player Stats – GP  G  A  PTS  PIM

“We are very excited to get Kaden. He can play the game anyway you like. He has great skill, and moves the puck well. Great both ways offensively and defensively. He also has an edge to his game.”

“He’s a dynamic forward, dual threat with the puck in the offensive zone. Can make plays at speed. He’s dangerous off the rush and a really fun player to watch. We are thrilled to get him.”

“Luke is a highly skilled forward, really elusive in the offensive zone. Makes players around him better. Great touch with the puck and plays on his toes.”

“Ryan is a really good, mobile puck moving defenseman. He moves well four ways and manages the puck well in all 3 zones. Reliable two-way defenseman with a bright future.”

“Emmitt is a really smart and skilled forward. He has great offensive instincts and can make plays through seams. He has nice finish and a lot of upside.”

“Rylan is a solid puck moving defenseman. He activates at the right time and thinks the game really well. He had a really good season and we feel he is on a great trajectory.”

“Kai is a power forward and tough to contain in the offensive zone. He can impact the game in a variety of ways. He handles the puck well and is tough to play against. He is dangerous below the circles.”

“Cooper is a highly skilled forward. He’s very creative with great offensive instincts. He drives the bus offensively and is dangerous off the rush and in the offensive zone. He’s a fun player to watch with tremendous upside.”

“Blake is a smooth skating defenseman. He is a great puck mover that has a good head for the game. We see a lot of upside in Blake.”

“Lenny is a really solid 2-way defenseman. He moves the puck really well to exit the zone. He manages the puck well in all three zones and can shut down the oppositions top players. He plays a responsible all-around game.” 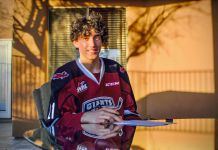