The Vancouver Giants added 12 new prospects to their organization earlier today during the 2020 WHL Bantam Draft. Below is a detailed recap of all 12 selections which included seven forwards, three defencemen and two goaltenders. 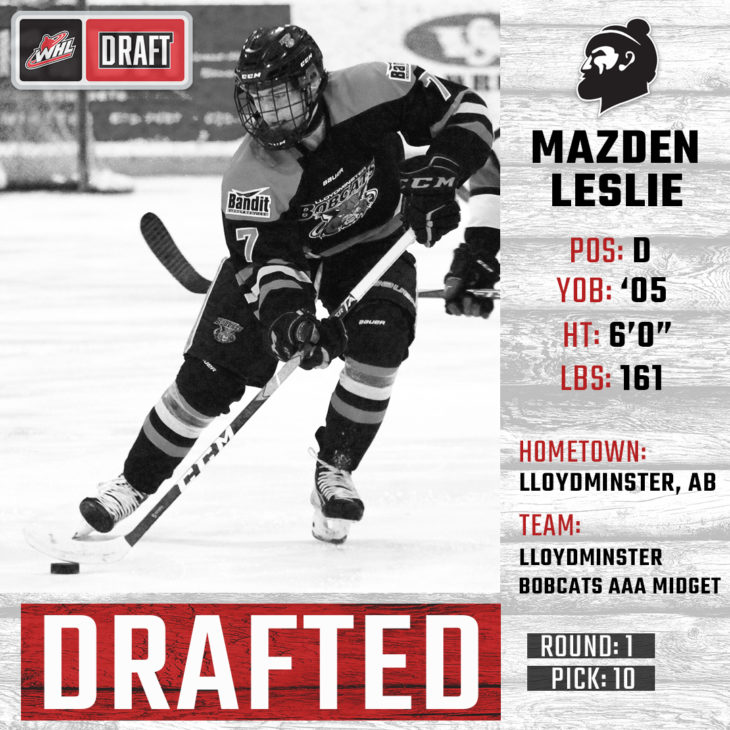 Leslie, a right-handed shot, checks in at 6’0” and 160 pounds. In 2019-20 he played Midget AAA as an under-ager with the AMHL’s Lloydminster Bobcats. In 32 games he supplied five goals along with seven assists for 12 points along with 70 penalty minutes. He added three assists in five playoff games.

A year prior, as a first-year bantam player, Leslie scored 23 goals and added 27 assists for 50 points in 33 games with the Bobcats Bantam AAA program. In four playoff games he scored four goals and added five assists for nine points along with 16 penalty minutes. He led the AMBHL in points by a defenceman, captured AMHL Rookie of the Year honours and was voted the league’s top defenceman.

“He is going to be a very exciting player down the road,” said Scouting Director Daryl Anning. “He didn’t look the least bit out of place playing against older competition this past season. We see him as a future power play quarterback. He’s got an edge and is projected to get bigger yet.”

Giants head scout Terry Bonner adds, “His awareness is really good. He thinks the game at a supremely high level. He finishes checks well and has some definite offensive upside. He has a lot strengths. It was a no-brainer for us to select Mazden Leslie with our first pick.”

Shortly after being picked by the Giants, he spoke with Dan O’Connor: 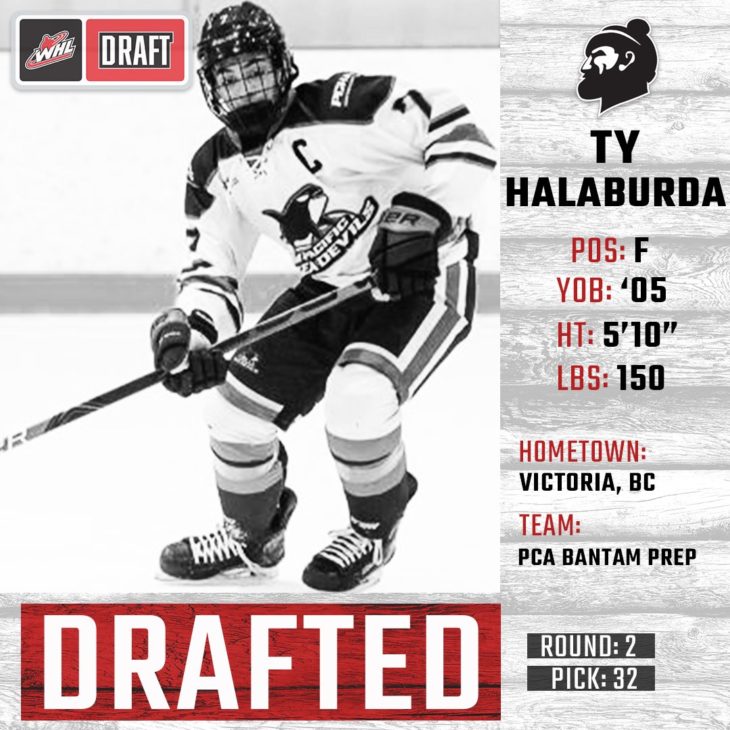 The Vancouver Giants selected a pair of talented forwards with their next two selections in the 2020 WHL Bantam Draft.

The 5”10’, 145-pound center is a right-handed shot and is coming off a strong season with the Pacific Coast Bantam Prep program where he scored 27 goals along with 26 assists for 53 points in 28 games along with 35 penalty minutes. He added a goal and two assists for three points in two playoff games. He was team captain.

“We’re thrilled to get him,” said Giants Director of Scouting Daryl Anning. “He fits the ‘Giants mold’ perfectly. He’s fast, physical and has a great work ethic. He’s a 200-foot player but can finish his chances. The biggest thing for us is that he’s a good kid and a natural leader.”

Halaburda was the first BC-born player and the first forward drafted by the Giants in 2020.

Here’s Halaburda at the conclusion of the 2020 WHL Bantam Draft in conversation with Dan O’Connor: 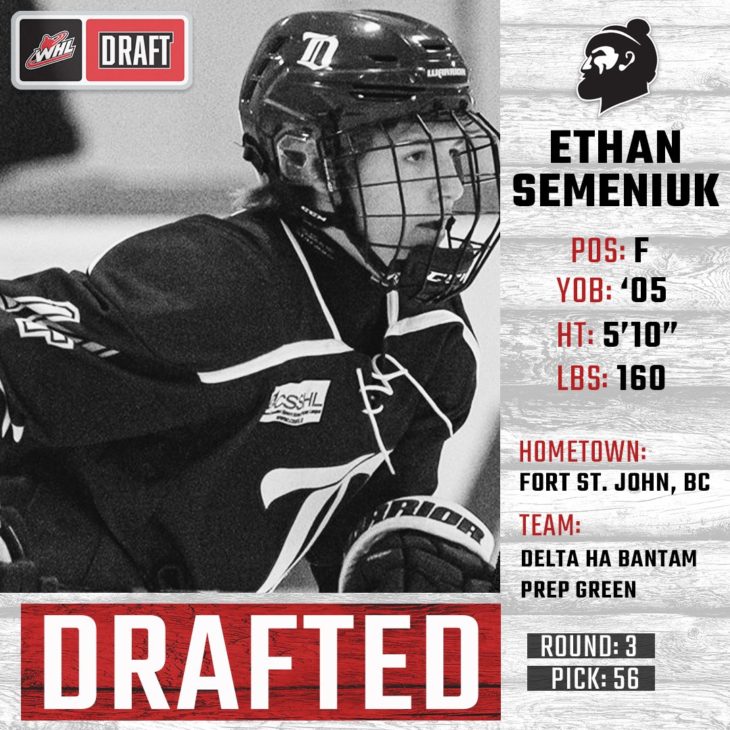 In Round 3 the Giants stayed in British Columbia for the selection of 5’10”, 160-pound forward Ethan Semeniuk.

Last season with the Delta Hockey Academy’s Bantam Prep Green program, Semeniuk notched 19 goals along with 31 assists for 50 points in 30 games. He added a pair of assists in two playoff games. In six games at the John Reid Bantam tournament, Semeniuk produced one goal and four assists for five points in six games.

“I like his skillset,” said Giants Head Scout Terry Bonner. “He’s a good skater with decent size and overall he has just a really good hockey IQ and sense for the game.”

Ethan Semeniuk was the second forward and the second BC-born player drafted by the Giants. 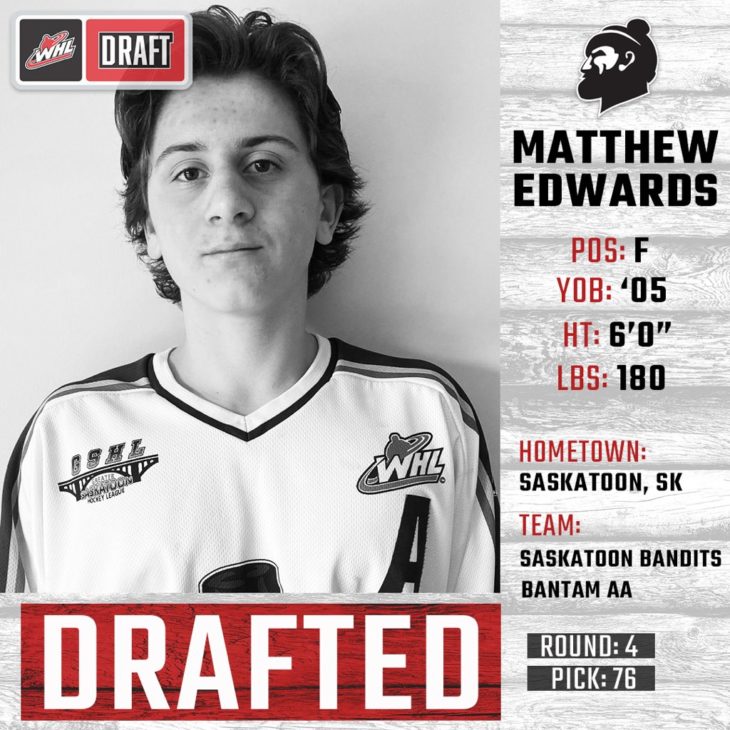 In Round 4 the Giants went to the Prairies to select forward Matthew Edwards out of Saskatoon, SK with the 76th overall pick.

Edwards is 6’0” and 180-pounds and produced 25 goals, 37 assists and 102 penalty minutes in 31 games with the Saskatoon Bandits (Saskatoon Bantam AA). He also dressed three games as an under-ager with the SMHL’s Saskatoon Blazers where he’ll play full-time next season.

Giants Scouting Director Daryl Anning says, “He’s the total package. A power forward-type player and very hard-nosed. He’s got good speed and plays with a lot of grit and determination. Fans will love his compete level. He’ll be very hard to play against down the road.”

Edwards was the third forward and the first Saskatchewan-born player picked by the Giants in 2020. 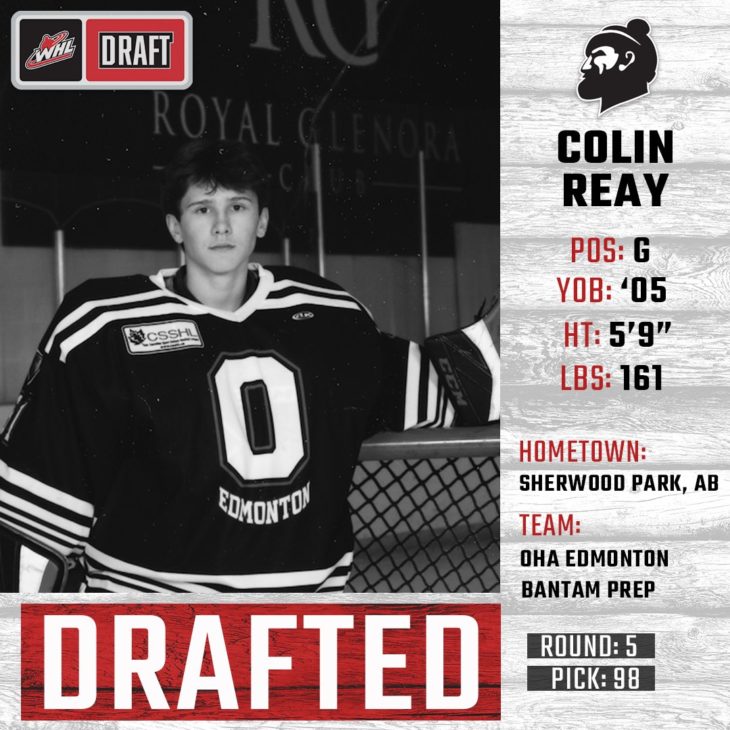 With their fifth-round pick the Giants went to Alberta to select goaltender Colin Reay out of Sherwood Park, AB.

Reay checks in at 5’9” and 161-pounds. He played last season with OHA Edmonton’s Bantam Prep program where he went 8-8 with a 3.28 goals-against average and a .911 save percentage. Two of his eight victories were shutouts.

“He’s a great goaltender who carries himself very professionally,” said Giants Northern Alberta based scout Mike Green. “He controls his emotions well. His coaches rave about his character and his practice habits. A hard-worker that battles to stop every puck.”

He was the fifth goaltender selected in the entire 2020 WHL Bantam Draft. He was also the second Alberta-born player drafted by the Giants in 2020. 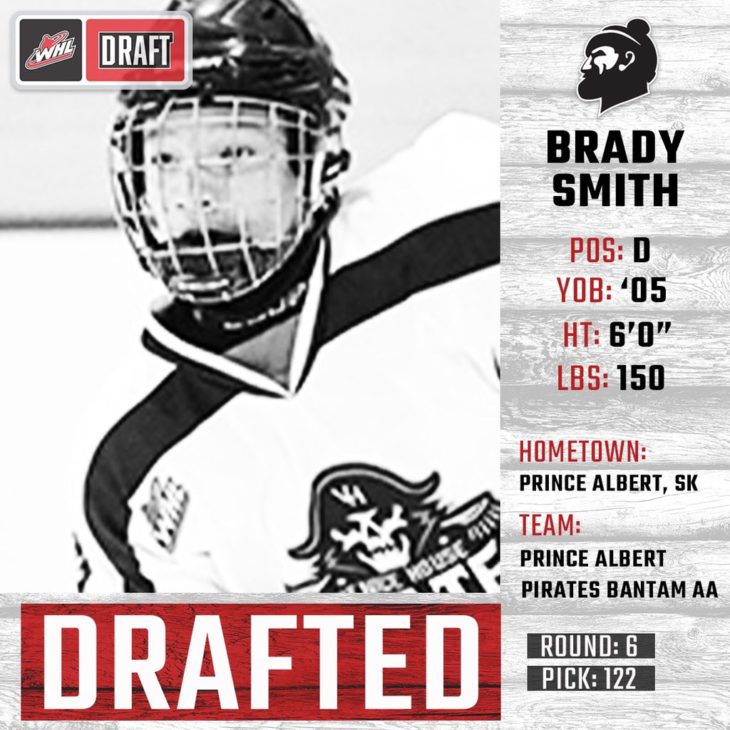 In Round 6 the Vancouver Giants drafted defenceman Brady Smith out of Prince Albert, SK.

Smith checks in at 6’0”, 150-pounds and is a right-handed shot. He scored four goals and added 12 assists for 16 points 23 games with the Prince Albert Pirates (Bantam AA) team last season.

Vancouver Giants Saskatchewan scout Bill Gibson says, “Brady is mobile, moves the puck well and is responsible defensively. He boxes out well and keeps the front of the net clear. He makes a good exit pass and is a model teammate. His coaches all speak very highly of his character and leadership.”

Brady Smith was the second defenceman and the second Saskatchewan-born player drafted by the Giants. 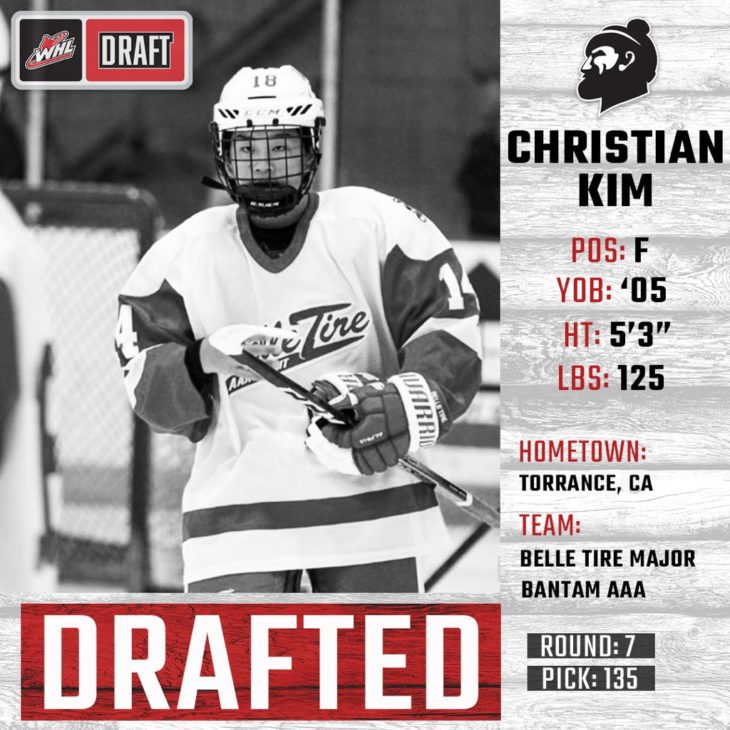 The Giants had two picks in Round 7, and used them both on American-born players.

The first one (135th overall) was used to select forward Christian Kim out of Torrance, CA.

He was the fourth forward and first US-born player selected Wednesday by Vancouver. 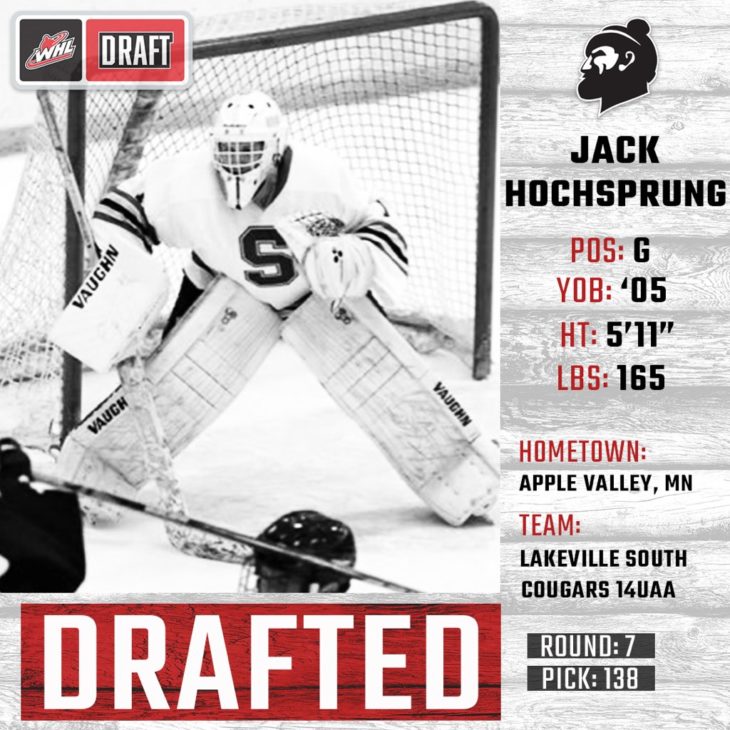 Hochsprung is 5’11” and 165-pounds. He appeared in 31 games with the Lakeville South Cougars 14UAA program where he posted a goals-against average of 1.81 and a .926 save percentage.

“Jack Hochsprung has good size. We feel he’s one of the top goaltenders coming out of the State of Minnesota. He’s athletic, has good compete-level and challenges shooters well,” adds Daryl Anning.

He was the second goaltender and second US-born player drafted by the Giants. 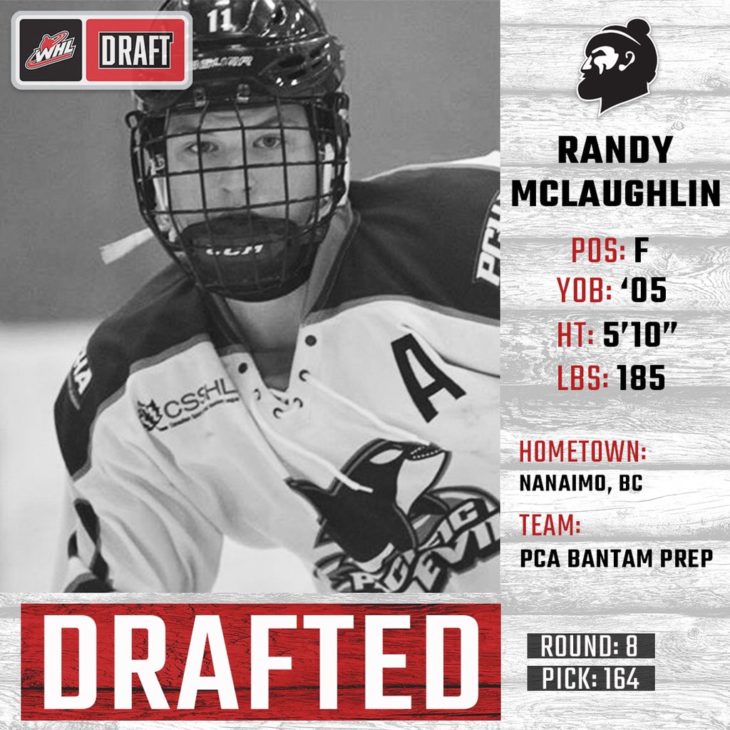 In Round 8 the Giants went back to Vancouver Island with the selection of forward Randy McLaughlin out of Nanaimo, B.C.

McLaughlin is 5’10” and 185 pounds and is coming off a season where he scored 20 goals along with 14 assists for 34 points with the Pacific Coast Hockey Academy. He was a teammate of fellow Giants draftee Ty Halaburda (Round 2) and was an alternate captain with the Sea Devils.

“He’s a hard-working, honest player,” said Giants Vancouver Island scout Kelly Kursteiner. “He’s well-liked by his teammates and coaches, a really personable kid with a great family and he does a little bit of everything to help his team win games.”

He was the fifth forward and the third BC-born player taken by the Giants on Wednesday. 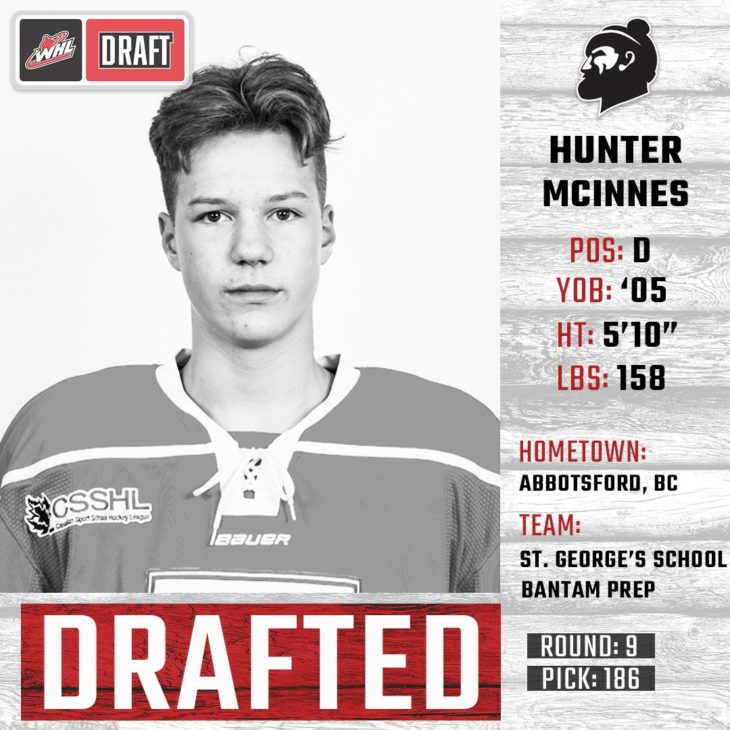 The Vancouver Giants stayed in British Columbia in Round 9 with the selection of defenceman Hunter McInnes from Abbotsford, BC.

Kelly Kursteiner adds, “He’s got some good skill from the back-end. He moves the puck well and plays a mean, hard-nosed game. He doesn’t shy away from corner battles, and he’s another player that brings strong character to the Vancouver Giants.”

He was the third defenceman and the fourth BC-born player chosen by the Giants during Wednesday’s draft. 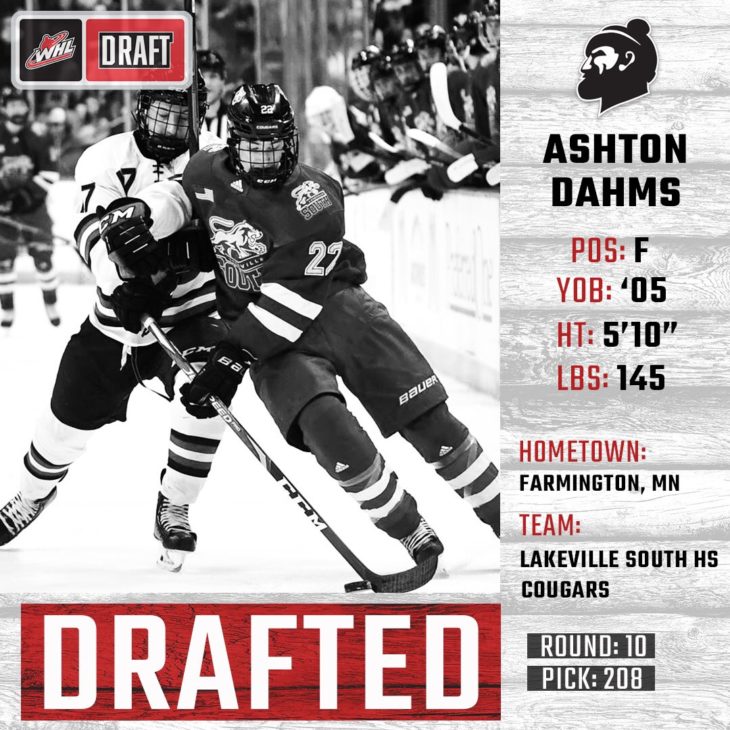 In Round 10 the Giants went back to the State of Minnesota to draft forward Ashton Dhams.

Dhams is 5’10”, 145-pounds and a left-handed shooting winger who posted four goals and seven assists for 11 points in 24 games with Lakeville South High School where he was teammates with fellow Giants 2020 draftee Jack Hochsprung.

He added 16 points (10G, 6A) in nine games with the Blue Army U14 Selects and an additional four goals and two assists in 11 games with the MN BEL Bolts.

Giants US Scout Ryan Sawchyn says, “He’s a really high-end player. Ashton had a really strong season playing against older competition in Minnesota High School hockey and He plays the type of game that I think really translates well to the Western Hockey League.”

He was the sixth forward and the third US-born player chosen on Wednesday by the Giants. 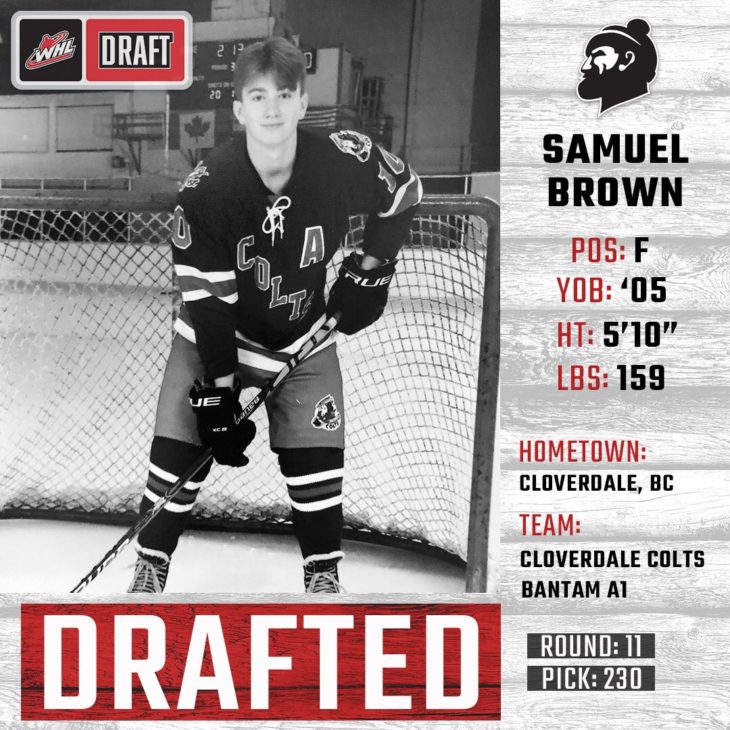 With their final pick in the 2020 WHL Bantam Draft the Giants stayed local with the selection of forward Samuel Brown from Cloverdale, BC.

Brown played the 2019-20 season with the Cloverdale Colts Bantam A1 program. He checks in at 5’10”, and 159-pounds. He is the son of Giants Senior Advisor Bob Brown.

Brown was the seventh forward and fifth BC-born player selected by the Giants on Wednesday.

Here’s the pick breakdown by region:

Here’s the pick breakdown by position: