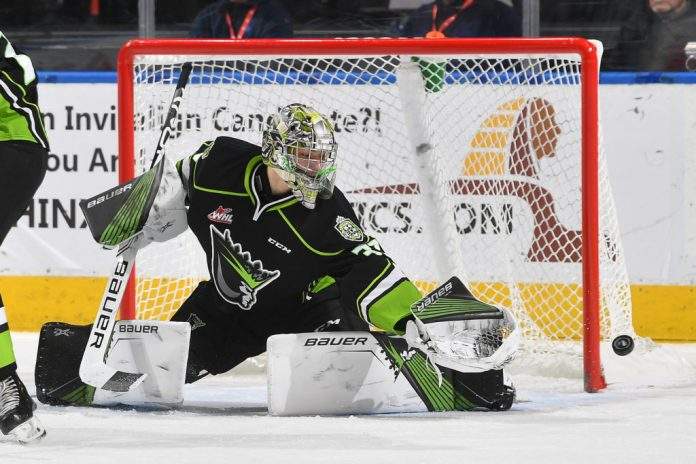 Edmonton Oil Kings goaltender Sebastian Cossa and defenceman Matthew Robertson are two of 41 of the country’s top under-20 players to be invited by Hockey Canada to attend Canada’s National Men’s Summer Under-20 Team summer development camp.

In total, five goaltenders, 10 defencemen and 26 forwards will attend the five-day virtual camp, participating in a variety of sessions with a focus on player development through online education.

A native of Sherwood Park, AB, Robertson was the New York Rangers’ second round selection, 49th overall, in the 2019 NHL Draft.

An alternate captain with Edmonton, Robertson was the Oil Kings first round selection, seventh overall, in the 2016 WHL Bantam Draft.

SEBASTIAN COSSA
This marks Cossa’s second invitation in a month to a Hockey Canada camp, having been invited to the goaltending development camp.

Cossa, a 6’5.5”, 206 pound netminder, has just completed his first season with the Oil Kings, appearing in 33 games, posting a 2.23 goals against average and a 0.921 save percentage. In his first game, on October 4, 2019 vs. the Swift Current Broncos, he registered his first WHL win and his first WHL shutout, making 40 saves.

During the shortened WHL campaign, the native of Fort McMurray, AB set a franchise record with 21 wins as a rookie and was named the recipient of the Oil Kings Unsung Hero Award. Cossa was also named the WHL Vaughn Goaltender of the Month of December, 2019.

Cossa was the Oil Kings’ second round selection, 36th overall, in the 2017 WHL Bantam Draft.

BRIAN CHEESEMAN
Cheeseman has just completed his tenth season as the Head Athletic Therapist for the Oil Kings.

He was also a member of the Oil Kings staff who enjoyed WHL championships in 2012 and 2014, and a Memorial Cup championship in 2014.

The Mount Pearl, NL native served as an Athletic Therapist with Hockey Canada for the U-17 Pacific Team in 2012 and won gold at the 2013 Ivan Hlinka Memorial Tournament.

The 2021 IIHF World Junior Championship returns to Canadian ice this December, with Edmonton and Red Deer set to co-host the annual holiday tradition. Games will be played at Rogers Place, the home of the NHL’s Edmonton Oilers and the WHL’s Edmonton Oil Kings, and at the Westerner Park Centrium, home of the WHL’s Red Deer Rebels.