As teammates Evan Dunfee, Inaki Gomez, and Ben Thorne reflect on their experience at the 2014 IAAF Race Walking Cup six years later, it was an experience that helped pave the way and raised expectations for Canadian race walking for the following years.

Racing to the very end, the Canadian trio crossed the finish line 11th, 12th, and 13th overall, offering an unique opportunity to share that experience together on the finish line. All three of them had broken the previous Canadian 20-kilometre record set by Gomez (1:20:58) at the 2012 Olympics, it acted as another stepping stone for more.

With Dunfee and Gomez training since 2006 and Thorne joining in 2011, the 2014 Race Walking Cup strengthened the chemistry between the three Canadian race walkers.

“It was cool because I remember that race being the first time where we all came across the line and we were high-fiving and celebrating,” said Dunfee. “There was an immediate sense of euphoria, knowing how fast we’ve gone, none of us have gone within 45-seconds of that time so it was really nice to be right there and celebrate together.”

“We were always supportive of each other,” added Gomez. “There were days when I would have a bad race or Evan or Ben would have a bad race, but we would always have a belief of us doing well. To have a day where all of us could put it together, celebrate it together, be so close to one another, spoke to how it came together at the right time when it mattered. It’s pretty unusual to have three athletes in the same race perform at that level, it’s something that we’ll all cherish.”

“Inaki and Evan have been training for a while before that so, that was one of the first races where I was able to break in a little bit and become fully part of the group, and helped part of the process. It definitely helped that they both beat me,” Thorne reflected with a laugh.

After finishing fourth overall in the team rankings, it was announced in April this year that the Canadian squad would be upgraded to a silver medal at the 2014 championships after Ukrainian athlete, Nazar Kovalenko was sanctioned for a doping violation, disqualifying the Ukrainian team and altering the overall scoring.

For Dunfee, there was no doubt in his mind, in 2014 and now, that they deserved a medal.

“Looking back at it, all five of us that were on the team, know we deserved a medal,” Dunfee said. “We knew we were robbed of either a bronze or silver medal and there was nothing we could do. But we had the races of our lives at that point and we were happy with it but that opportunity to stand on the podium with Bruno [Carriere] and Creighton [Connolly] is never coming back.”

“[Carriere and Connolly] were just as instrumental to our performance, whether if they were right with us or not, their attitude, their comradery, that’s all important to building a team that’s successful. This is their win as much as it is ours,” Gomez added.

2015 turned out to be a big year for trio once again. Dunfee and Gomez would finish 1-2 at the Toronto Pan American Games while Thorne continued his rise, earning a silver at the Gwangju Universiade before a record-breaking performance at the World Championships in Beijing.

Having not reached the podium in 2014, the trio joined together once again in 2016 along with Mathieu Bilodeau at the IAAF World Race Walking Team Championships in Rome, with new emphasis on the team aspect of the competition and to see where they were at before the Olympic Games in Rio de Janeiro.

“Having had the success we had the previous year, we wanted to use the World Cup as a measuring stick in the lead-up to Rio, with Evan coming down to the distance and Ben having the success he’s had, it proved we were able to battle for those top spots again,” said Gomez.

“The medal was an accomplishment that was nice to get but being able to be in the top 8 for Ben and I, and Evan to be in the top 16, it just shows the level we were coming in at before getting ready for Rio. It was nice to validate all the work done as a team but also as individuals against competitors around the world.”

All hailing from the British Columbia and the UBC Thunderbirds program, the Canadian west coast remains a hotspot for Canadian race walking development.

With Gomez retiring in 2017 and now part of the World Athletics and Team Canada Athletes’ Commission, and Thorne making a quick return to the track this past February while pursuing a doctorate at Harvard, the growth of race walking from the west coast led by Dunfee and coaches like Gerry Dragomir continues. With the proper steps, the future of Canadian race walking can develop coast-to-coast.

“It stems from support that then comes with the belief that we can develop medal potential,” Gomez explains. “Once you create that and support the right group, athletes will follow. You see that in any discipline, as soon as you put the money where it needs to go, support the coaching staff and the need to be professional, the communities will start paying attention.”

“We’re ben lucky to have Gerry, who has stayed committed for so many years and we’ve had high school programs in BC to allow for athletes to participate in the event at those championships and allows exposure of the event,” Gomez concludes.

“I think if you wanted more participation from the other provinces, you add it to the high school program, because if you add race walking to championships like OFSAA in Ontario, I would expect to see similar levels of participation,” said Thorne.

For the past, present, and future of race walking, with or without the silver medal in 2014, that race walking championships continues to be seen as a stepping stone to the growth of Canadian race walking.

For Gomez and Thorne, who is hesitant to reveal if he’ll make a comeback for next year’s Tokyo Olympic Games, they’re happy to see the growth from the sidelines. Gomez summarized it best, “we’ll just live vicariously through Evan as he continues to race over the next couple of years.” 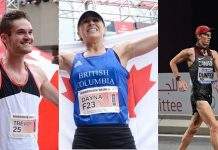