The Victoria Royals are pleased to announce that defencemen, and signed prospects, Jason Spizawka and Kalem Parker have been invited to Hockey Canada’s Under-17 Development Camp set for July 19-25.

Spizawka and Parker are among 113 players who have been invited to the week-long virtual camp. The players will be split into six teams and will participate in a variety of sessions with a focus on player development through online education.

“Jason and Kalem are both hardworking and talented individuals who have made strides in their game this past year,” Royals’ General Manager & Head Coach Dan Price said. “They are both deserving of this recognition and we wish them the best of luck at the development camp.”

Players selected to Hockey Canada’s Under-17 program will compete at the 2020 World Under-17 Hockey Challenge, scheduled for October 31st – November 7th in Charlottetown and Summerside, PEI. The annual tournament will feature three Canadian teams – Canada Black, Canada Red and Canada White. The rosters for the three squads will be announced at a later date.

A native of Victoria, BC, Spizawka spent last season with the South Island Royals Under-18 team of the BC Major Midget Hockey League. Spizawka played in 36 games with South Island and collected 14 points (7g-7a) to go along with 25 minutes in penalties. He also recorded an assist in three contests with the Junior B Saanich Braves of the Vancouver Island Junior Hockey League.

Spizawka was Victoria’s first round pick in the 2019 WHL Bantam Draft, selected 19th overall and has been signed to a WHL Standard Player’s Agreement by the team.

The product of Clavet, SK played in 29 games during the 2019-20 season for the Saskatoon Blazers Under-18 AAA team of the Saskatchewan Midget AAA Hockey League. In those 29 contests, Parker registered 12 points (3g-9a) and 14 penalty minutes.

The Royals selected Parker in the second round, 32nd overall, in the 2019 WHL Bantam Draft and have signed him to a WHL Standard Player’s Agreement. 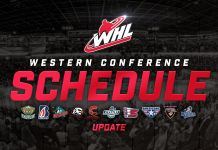