There is just something about home openers in football, especially in the CFL where our three-down game is such a staple of summer activity in this great country. The hot dogs smell fresher, the beer tastes colder and there really is nothing like walking up to BC Place and taking in the pre-game vibe on Terry Fox Plaza for the first time in any given year. As we now know, the year 2020 has been unlike any other. This version of your BC Lions was scheduled to take on Edmonton in the 2020 home opener this Saturday. While we still remain confident there will be real games to talk about starting in September, the latest edition of Baker’s Archives looks back at few memorable home openers from the last 30 years. Enjoy! 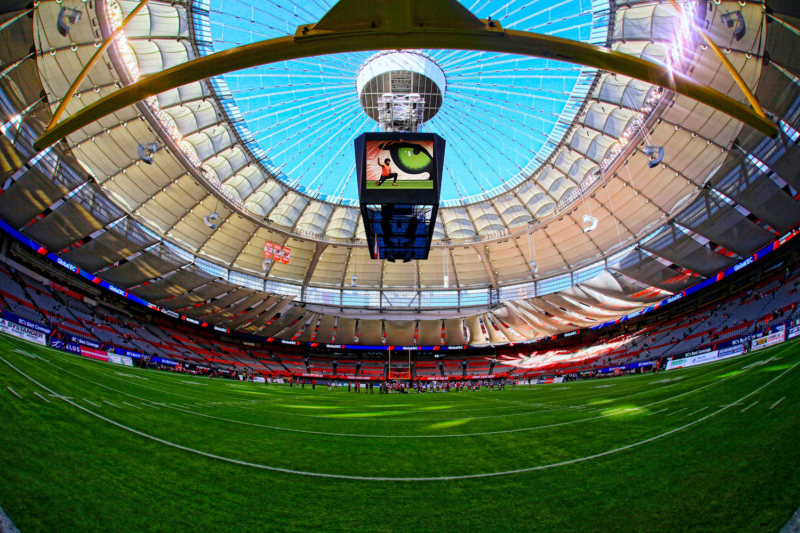 2016 would prove to be a nice turnaround year in the den but despite the return of Wally Buono to the sidelines and a young, dynamic quarterback in Jonathon Jennings, expectations weren’t exactly sky-high after a 7-11 campaign in 2015;  to date, the worst season under Buono’s tenure as GM. That all changed with a thrilling victory over the Stampeders to kick things off.

Chris Rainey’s 72-yard punt return touchdown early in the fourth quarter proved to be the winning points while a major turning point occurred just before halftime when a stout Lions defensive front stuffed Bo Levi Mitchell and the Stamps on a third and goal from the one-yard line. It would prove to be a major stepping stone for a 12-6 season and second place finish in the ultra-competitive West Division.

Despite extending their league-best streak of making the playoffs to 20 seasons, Jeff Tedford’s lone year in charge wouldn’t go down as a successful one in the eyes of many. But there were still a few exciting nights at BC Place. After a week one bye and a loss in Ottawa, the pressure was mounting in the home opener against Saskatchewan. Trailing by 11 points with less than two minutes to play, Travis Lulay hit Austin Collie for a 46-yard touchdown bomb and then converted the two-point attempt to put them within three.

Then as the Riders tried to ice it away by going for it on third and one, the Lions defence made a huge stop to help set up Richie Leone’s 55-yard field goal with no time left. The crazy comeback was complete when Lulay hit Arceneaux for the winning touchdown. Manny then heaved the ball into the stands where it was caught by none other than Kim Lulay, wife of the quarterback. Only in the CFL, eh?

Thanks to all of those who played! The answer is, the @sskroughriders. We have played them in a home opener 21 times since 1954 and have won 11 of those contests! The last home opener came in 2015 where @mannyshow84 caught the winning TD in overtime 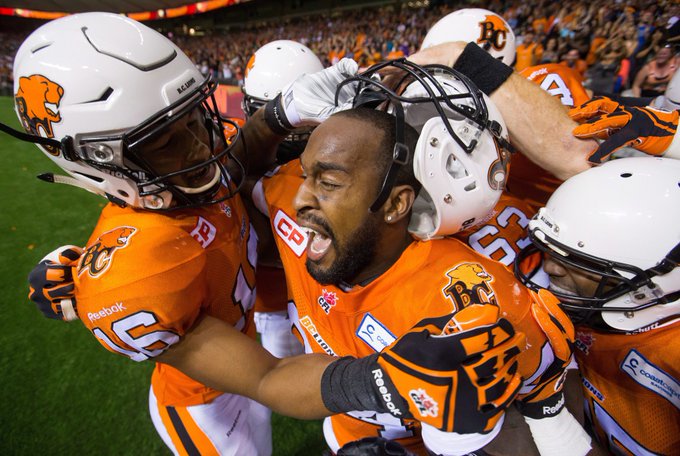 Under normal circumstances, this night would have been highlighted by the unveiling of the 2011 Grey Cup banner. While that was indeed a special pre-game moment, this will forever go down as Geroy Simon’s night. With a 56-yard reception from Travis Lulay early in the fourth quarter, number 81 passed Milt Stegall as the CFL’s all-time leader in receiving yards. The Lions would cruise to a 33-16 victory in the Grey Cup rematch and go on to post a 13-5 regular season record, winning eight of nine contests at BC Place, before falling to Calgary at home in the Western Final. As for Simon, he would retire with 16,352 receiving yards, 1,199 more than Stegall.

While many local sports fans were still on a post-Vancouver 2010 Olympic cloud, the venue that hosted the opening and closing ceremonies was officially closed for a 500-million dollar facelift. This resulted in the Lions’ move to a temporary structure on the old Empire Stadium grounds for all of 2010 and a good chunk of 2011. The first regular season game at Empire Field wasn’t very memorable in itself: the Lions were beaten 37-18 by Saskatchewan. But for fans of a certain vintage, the nostalgia was too good to be truly upset about early season results.

For younger fans like myself who had only attended Lions games indoors, it was a magical experience to watch a game with the noise of screaming customers on the Playland rollercoaster within earshot. As for the players, it was a decidedly mixed reaction. The team would post a dismal 5-9 record at the venue before moving back to their renovated palace in September 2011.

“I don’t know what it was about that stadium, we just could not find wins there,” Lulay told bclions.com in 2016.

“It was a beautiful setting and you really felt like you were stepping back in time, but I think we were all happy to get back to BC Place.”

Truer words have never been spoken. 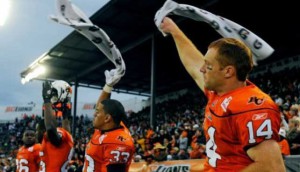 It was a combination of celebrating the history and ushering in a new age. Although the Lions’ 50th anniversary season began with a 34-27 loss to hated rivals Winnipeg, you could sense a change in fortune was coming. GM/head coach Wally Buono arrived from Calgary and brought franchise quarterback Dave Dickenson with him.

Those key additions brought hope back to a franchise that quickly had fallen on tough times after winning the Grey Cup in 2000. On this night, the club’s 50th Anniversary Dream team was honoured before kickoff and the current club donned a special orange 50th Anniversary jersey for the first of three occasions that season. Overall, it was a perfect blend of honouring the best while welcoming in some key figures that would spear-head nearly a decade-long period of dominance for the club. 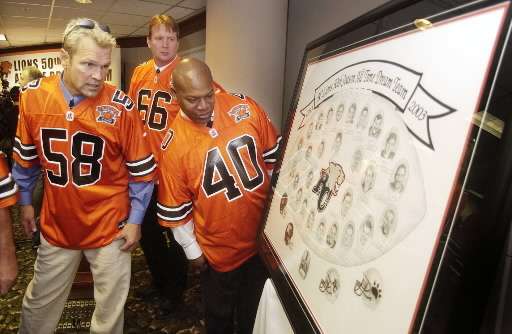 The Doug Flutie era in BC may not have produced a Grey Cup appearance, but fans were treated to a number of memorable games. Flutie’s CFL debut was certainly no exception. It didn’t take him long to prove the three-down game was tailor-made for his pure speed and athleticism. On the other sideline was Buono, making his CFL head coaching debut with the Calgary Stampeders.

It was a classic game by Flutie and CFL standards as the quarterback hit Ray Alexander for a Hail Mary touchdown with no time on the clock to force overtime. The game ended in a 38-38 tie and fans were given a glimpse of the style of football they could get used to for the next couple of seasons. Flutie would only start five total games for the club in that first season before earning the CFL Most Outstanding Player Award in 1991. One can only imagine what he could have done had he spent more than two years with the Lions.

**For the record: the Lions have only played two tie games since that night: September 2nd, 1994 against the Sacramento Gold Miners in Northern California and August 17th, 2007 in Calgary.

36-29-1- the Lions’ overall record in home openers since their inaugural season of 1954. That’s good for a winning percentage of .554. The classic 1990 tilt with Calgary mentioned above remains the only home opener tie to date.

4- the total number of Lions home openers that have required overtime. The 1990 tie was the first. That was followed by three victories: 1993 against Saskatchewan, 2001 against Edmonton and the previously mentioned 2015 contest against Saskatchewan.

21- speaking of Saskatchewan: this is the number of home openers they have been in town for, the most of any Lions opponent. The all-time record in those games is 11 wins and 10 losses.

12- the number of Lions home openers against Edmonton prior to the originally scheduled 2020 contest.  The Lions currently hold a 5-7-0 record in home openers against the green and gold. The last time they defeated the Eskimos in a home opener was way back in 2001 when Damon Allen and the defending Grey Cup champions prevailed 35-28 in overtime. Since then, Edmonton has spoiled the Lions’ home openers in 2014 and 2017.

2- the number of home openers against teams that no longer exist. The Baltimore Stallions were in town to kick off the 1995 campaign, eight months after they met in the Grey Cup at BC Place. The Lions raised the banner and then took down Baltimore yet again, 37-34. The Stallions would re-locate to Montreal before the start of 1996 and the CFL continues to keep those two cities’ respective CFL records separate. Ten years later, the Lions took down the Ottawa Renegades in their home opener. That Renegades franchise would fold after that season.

2- the number of Lions home openers that were rematches of the previous year’s Grey Cup. We’ve mentioned them both already: 1995 against Baltimore and 2012 against the Blue Bombers.