Athletics Canada is pleased to unveil its 2020-2021 Board of Directors. These distinguished professionals bring a wealth of experience, expertise, and passion as they help guide athletics in Canada.

“We are incredibly lucky to have these talented people at our Board table,” said Bill MacMackin, Chair of the Athletics Canada Board of Directors. “Each individual brings important skills, points of view, and a long-standing relationship with the sport.”

“Our Board members play an important part in setting the course for athletics in this country,” said Athletics Canada’s Board Vice Chair Helen Manning. “Through our shared commitment to the growth of our sport, and through strong partnerships with our members, we will be able elevate our game even further.”

“The leadership of this group will help us shape our sport from the local track to the international stage,” said Athletics Canada Chief Executive Officer David Bedford. “Through our shared commitment, we will continue to grow athletics in Canada together.”

Athletics Canada’s Board of Directors counts 13 members, including a Chair, Vice Chair, Treasurer, three athlete representatives, six directors at large and on ex-officio member. Directors are elected by the provincial and territorial athletics associations.

Learn more about how Athletics Canada is governed at Athletics.ca.

Athletics Canada Board of Directors Biographies

Bill MacMackin (Saint John, N.B.)
Bill MacMackin has been the Chair of Athletics Canada’s Board of Directors since 2017. He has been the President and Coach at the Saint John Track and Field Club since 2015. He and his brother have owned and operated Brenan’s Funeral Homes in Saint John since 1987 expanded the business, buying over 20 additional locations in four provinces through their other company, Select Community Funeral Homes. MacMackin is the driving force behind the funding and construction of the Saint John Fieldhouse which opened its doors in 2019.

Helen Manning (Sutton West, Ont.)
Helen Manning is the Vice Chair of Athletics Canada’s Board of Directors and has 40 years of experience in sports marketing, sponsorship, strategic planning, event execution, policy development, risk management and organizational structure. She has worked with large events throughout North America and has experience in working with a variety of broadcast partners on internally produced content, regional and national traditional and digital partners. A national and international track and field official since the 1970s, Manning was elected as President of the Canadian Federation of Sport Organizations for the Disabled in 1991 and served in that role in what would become the Canadian Paralympic Committee until 1997.

Robert Demers (Dorval, Que.)
Robert Demers has been a member of Athletics Canada’s Board of Directors since 2017 and acting as Treasurer since 2018. Professionally, he is an experienced senior executive in performance management and business process improvement. His career has included stops with Symcor Inc., ClinTrials BioRecherches, Kronos Canada, Natrel, and Lloyds Bank of Canada. He has been on the Board of the Fédération Québécoise d’Athlétisme. He served as a volunteer coach with McGill Olympic Club and Club athlétique Les Pulsars and has completed in dozens of marathons.

Charles Philibert-Thiboutot (Quebec, Que.)
Charles Philibert-Thiboutot is one of Canada’s top middle-distance runners winning the 1500-metre national title on three occasions. In 2015 he captured bronze at the Pan American Games in Toronto, later the same summer he was a semi-finalist at the World Athletics Championships. The 2016 Olympian also won bronze at the 2018 NACAC Track & Field Championships.

Greg Stewart (Kamloops, B.C.)
Greg Stewart capped a great 2019 season with silver medals in the men’s F46 shotput at the IPC World Championships and Parapan American Games. In his rookie season in Para athletics in 2018, Stewart was ranked number one in the world in the F46 men’s shotput. Before becoming a thrower in athletics, he was a member of Canada’s national sitting volleyball team highlighted by bronze medals at the 2007 and 2011 Parapan American Games. He also won three world titles with the men’s Para standing volleyball team.

Kate Van Buskirk (Brampton, Ont.)
Kate Van Buskirk was appointed an Athlete Representative on Athletics Canada’s Board in 2019. She has represented Canada on numerous occasions, winning a bronze medal at the 2014 Commonwealth Games in the 1,500-metres. She also set the Canadian record of 4:27.02 in the indoor mile in 2018 (since broken), before being named to the IAAF World Indoor Championships Team. Van Buskirk was also named Team Captain of Canada’s 2018 NACAC Championships team by her peers and team coaches.

Rosey Edeh (Toronto, Ont.)
Rosey Edeh will support the board with her outstanding experience as an athlete and journalist with Global and Shaw media. In her current role, she provides leadership and creative problem-solving within the forms of communication and media relations. She is a three-time Olympian and brings her unrelenting attention to detail, impeccable organizational skills, and leadership. Edeh is also a sprint coach for the past five years at Leaside High School in Toronto.

Lynn Kanuka (White Rock, B.C.)
A member of the board since 2017, Kanuka is perhaps best known for her bronze medal performance at the 1984 Olympic Games. Since then, she has coached and served as an ambassador for the sport in numerous capacities. Her coaching career spans decades at elementary, high school, club, and national levels. Since 2013, she has been in the position of Elite Athlete Coordinator for the BMO Vancouver Marathon and is also involved with the InTraining Program delivering hundreds of clinics throughout the Lower Mainland and BC Interior.

Mihira Lakshman (Toronto, Ont.)
Mihira Lakshman is a digital media executive and award-winning journalist with more than a decade of experience at large and small companies in web, mobile, social media, television, radio, and print platforms working with CBC and as Editor in Chief for Canadian Running Magazine. He currently runs the client services department at The Walrus. These experiences bring considerable expertise in sponsor integration, content partnerships, staff management, digital strategy, and investigative journalism.

Bianelle Legros (Montreal, Que.)
Legros brings a wealth of experience to the board as a marketer through her work experience with the Canadian Olympic Committee and Tourism Montreal. She is the Director, Marketing and Business Development at the Fondation de l’athlète d’excellence du Québec that provides financial support and academic services to high-level student-athletes in Québec. She has family connections to athletics as the spouse of Bruny Surin, mother of national team athlete Katherine Surin and having also served as Bruny’s agent during his competitive career.

Grant Mitchell (Winnipeg, Man.)
Grant Mitchell is past president of Athletics Manitoba and current board member of Athletics Canada and of the Manitoba Marathon. Grant recently retired after practicing law for almost 40 years at Taylor McCaffrey where he focused on labour, employment, and human rights law. He also taught at University of Manitoba’s Faculty of Law for 22 years in labour relations and trial advocacy. Mitchell is a popular public speaker, having delivered over 450 full day seminars on labour relations issues to audiences in 8 provinces across Canada, from Victoria to St. John’s over a 30-year lecturing career.

John Paton (Edmonton, Alta.)
Paton has been Executive Director of the Alberta Schools’ Athletic Association since 1993 and a member of Athletics Canada’s Board of Directors since 2017. He has also held the role of President with School Sport Canada, chairing national meetings, and growing collaborative efforts with several groups including national sport organizations and other national agencies. Paton has been in several leadership roles in the areas of risk management, governance, strategic planning, and human resources to name a few.

Abby Hoffman (Ottawa, Ont.)
A four-time Olympian, Hoffman was the first woman ever to carry the Canadian flag into the stadium for the Parade of Nations of a summer Games, this coming at the Montréal 1976 Opening Ceremony. A British Empire and Commonwealth Games 800m champion in 1966, Hoffman was also a five-time medalist at the Pan American Games, winning gold medals in the 800m (1963, 1971), silver in the 800m (1975), and bronzes in the 800m (1967) and the 1500m (1975). From 1981-91 she was the first woman to serve as Director General of Sport Canada and was the first woman elected to the Executive Committee of the Canadian Olympic Association in 1981. She became a member of the executive council of the International Association of Athletic Federations (IAAF) and senior advisor to Health Canada. Hoffman was named an Officer of the Order of Canada in 1982. She was inducted into the Canadian Olympic Hall of Fame in 1996, Canadian Sports Hall of Fame in 2004 and the Jewish Canadian Athletes Hall of Fame in 2007. 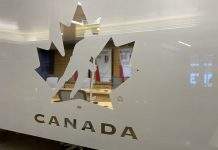 HOCKEY CANADA USHERS IN CHANGE WITH BOARD OF DIRECTORS ELECTION 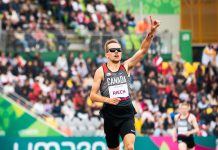 New Members named to BC Games Society Board of Directors