October 3, 2020    Victoria, BC (ISN) – Nanaimo forward Sean Donaldson’s breakaway goal late in the second period would prove the winner as the BCHL Clippers would defeat the Victoria Grizzlies 5-2 Saturday night at the rink in Colwood to even their Island Cup Series at a game apiece.

The Victoria Grizzlies, after thumping the Clippers 7-4 at Cliff McNabb Arena in Nanaimo Friday night, hoped to continue their scoring touch with another win Saturday and take the driver’s seat in the island best of five series.

The Grizzlies would prove the better team in the opening period. Seemingly quicker to the puck and controlling the play, Cody Monds would score his first of two goals on the evening, beating starting Clipper goalie Jordan Naylor six minutes in to the opening period. His goal would prove to be the only scoring in the first period of play. Despite Victoria carrying the play, Grizzlies netminder Blake Wood and Clipper’s Naylor would see 11 shots each to end the period.

The second period of play would decidedly go Nanaimo’s way. Opening with a game-tying goal only 31 seconds into the period by Clipper’s Nick DeSantis would seem to energize the visiting side. Nanaimo would go ahead 2-1 on a goal by Jaeger Murdock at the thirteen-minute mark to beat Victoria’s Wood.

Nanaimo would set Victoria back on their heels, taking a two-goal lead only two and a half minutes later when Jack O’Brien would spring his teammate Sean Donaldson free with a break-away pass at the Grizzlies blue line. Donaldson would beat goalie Blake Wood with a quick wrist shot to find the back of the net, putting his team up 3-1.  Victoria would look to Monds for his second goal of the game, replying only a half-minute later to narrow the Clipper’s margin 3-2.

The Grizzlies pressing forward, looking for puck possession in the Clipper’s end in the third period would get caught behind the puck when Liam Ryan would take the puck from Kyler Kovich to score, icing the win for the Clipper’s. Nanaimo’s Tim Washe would add the empty netter to give his Nanaimo Clipper’s the 5-2 victory.

Both teams would go 0-4 on the powerplay. Shots on goal would favour the Clippers 42-36.

The Grizzlies’ Alex Dipaolo would record a pair of assists, and Tomas Maia and Tanner Attew would also add an assist each.

The Clippers’  Micheal Craig and teammate Kyler Lovich would each have a pair of assist, while Michael Craig, Baxter Anderson, Jack O’Brien, Shaun Mahoney, and Carter Rose would all contribute with a helper each. 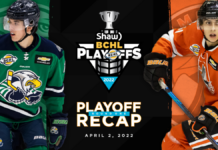 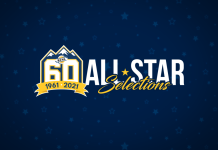 Penticton Vees double up on the Victoria Grizzlies