Brent Lakatos won the 2020 London Marathon after a wild sprint to the finish.

If that sounds familiar, it is because we are used to seeing Lakatos win races in a sprint. His career on the track includes 13 World Championship gold medals, to go along with seven Paralympic medals.

“My training has been going well, but you never know – especially when you’re talking about the best in the world,” Lakatos said after his historic win. “When you factor in the rain and the cold, I’m really happy I could get it done yesterday.”

With his win, Lakatos became the first Canadian to win the men’s London Marathon wheelchair race in 10 years. Like the rest of the field, his training this past season was derailed somewhat by restrictions made necessary by the COVID-19 pandemic.

“I didn’t have any access to tracks from March until August, but luckily I do most of my training on the roads or on rollers in the garage, so there’s no problem with physical distancing there,” Lakatos said.

With so few events being run worldwide, Brent Lakatos will take some time to recover before gearing up for the 2021 season, in whatever form that takes.

“I’m going to take a short break. The track season is done and there aren’t really any marathons right now,” he said. “We’ll see if we get a spring season and track competitions heading into the summer.”

Woodfine Owns the Streets of London

In the men’s elite race, Tristan Woodfine crossed the line in a time of 2:10:51. That time represents two things to the 27-year-old runner. First, it’s a new personal best time by almost two and a half minutes. Secondly, and maybe most importantly, that time is faster than the Olympic qualifying standard of 2:11:30 for Tokyo next year.

“Hitting the Olympic standard means a lot. It’s been a dream of mine to represent Canada in the Olympic Games since I was 13 and this helps bring me one step closer to making that possible,” Woodfine said. “Also, I’ve had such amazing support from so many people over the years. I really wouldn’t have been able to make it this far without that, so today’s race was definitely for all of them.”

Woodfine’s time was good for 14th place in the 40th running of the London Marathon. Fellow Canadian Cameron Levins got off to a fast start and was on pace to set a new Canadian record for much of the race, but the cool, wet London weather got the better of him and he did not finish the race.

With sport being as affected as everything else during this COVID-19 pandemic, Woodfine was still able to keep up his training and make a huge improvement on his best marathon time, previously set at the Toronto Waterfront Marathon last fall.

“I’ve been very lucky, in that keeping up training during the pandemic has been easy. I live in a fairly rural area so getting in the training I needed wasn’t a problem,” Woodfine said. “We used this spring and summer of no races to really push the envelope a bit in training and try some new things.”

In the short term, Woodfine is going to home for a rest, but his future suddenly offers some new possibilities.

“I haven’t really thought about anything past this race,” he said. “Also with the race schedule still being a pretty big question mark we will just have to wait and see what opportunities come up.” 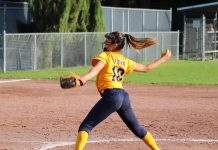 Canada falls to a more polished Poland at World Cup

ABOUT US
Your #1 source for community and amateur sports related news on Vancouver Island, British Columbia and beyond!
Contact us: [email protected]ews.com
FOLLOW US
© Independent Sports News 2021