The Penticton Vees Junior ‘A’ Hockey Club is pleased to announce that defenseman Ethan Martini (’00) has committed to Long Island University for the 2021/22 season.

Martini, 20, is entering his second season with the Vees after being acquired by the team in the offseason last year. The 6’7”, 194-pound rearguard posted a goal and five assists for six points over 40 games last season with Penticton, including adding a goal and an assist in five playoff games. Martini was recognized by the coaching staff heading into this season by being named to the leadership group as an assistant captain.

The Trail, BC native has suited up for 183 BC Hockey League games, scoring 2 goals and adding 19 assists for 21 points during that span, splitting time between the Vees, Trail Smoke Eaters and Powell River Kings. The blue liner has also had plenty of experience in the post season, compiling 2 goals and 7 assists for 9 points in 31 career BCHL playoff games.

“Ethan has progressed his game each year he has been in the league,” stated Vees President, General Manager and Head Coach Fred Harbinson, “He is now one of the top defenders in the league. I am proud of the effort he has put forth to earn his opportunity.”

“I am very excited to commit to LIU and have an opportunity to pursue my dream of playing hockey for another four years,” mentioned Martini, “It’s been a dream of mine to play college hockey and I’d like to thank my coaches and teammates who have helped me along the way.”

Long Island University is entering its first season in the National Collegiate Athletic Association (NCAA) Division I Men’s hockey. The Sharks will play their inaugural season in the Atlantic Hockey division with Brett Riley tabbed as the Head Coach of the new program. 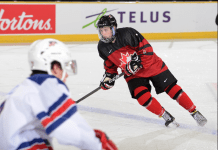