Irving started the night by qualifying seventh after landing a double full-full-full. Irving then moved on to the superfinals where he performed a near-flawless full double full-full scoring him 118.14, 8.10 points behind Russia’s gold medalist Maxim Burov.

“I’m feeling really good about the season, it’s building up well and I was really happy with my jumping this week” stated Irving, who with the rest of the team will be heading back to North America tomorrow after their long competition stint in Europe. Next stop, the infamous Deer Valley World Cup.

Also on the men’s side, Miha Fontaine and Émile Nadeau both put down a solid double-full double-full this weekend leading them into their first-ever World Cup finals. Fontaine and Nadeau ended the day with personal best results of 8th and 9th place respectively. This is quite an impressive performance by the 17 year-olds who are just getting started on the World Cup circuit.

On the Women’s side, Marion Thénault qualified first tying USA’s Winter Vinecki with a full-full. Unfortunately, finals did not go as smoothly where Thénault finished two positions short of the superfinals and ended the night in 8th.

The aerial team will be back in action next weekend in Deer Valley alongside our mogul team where they will aim to continue building on their season’s success. 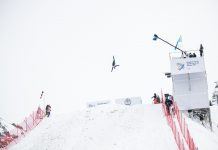 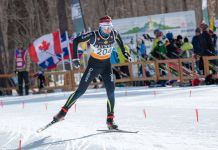 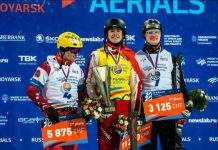