“If a race has no history, it has no worthwhile tradition.” – Scholar Carter Woodson, the chief architect of Black History Month

Our sport has deep roots when it comes to Black history in Canada and, throughout the month of February, we are going to highlight a number of individuals who produced outstanding performances, achieved greatness and contributed to making Canada the culturally diverse, compassionate and prosperous nation it is today. Many of these people inspired generation after generation as they broke down barriers.

Join us as we celebrate our Canadian trailblazers…

It was a moment in time that will live on forever – a first for a Black Canadian. It might not have been gold, but it was an achievement of Olympic-sized proportion.

Raymond Lewis, better known as “Rapid Ray” to his family, friends and teammates, was the first Canadian-born Black athlete to win an Olympic medal – bronze in the 4×400-metre relay alongside Jimmy Ball, Phil Edwards and Alexander Wilson at the 1932 Olympic Games in Los Angeles. Together, the group ran the medal race in a time of 3:12.8, finishing only behind the United States and Great Britain.

Lewis was born in Hamilton, Ont., in 1910, the grandson of escaped salves. As a teenager, Lewis won 17 national high school championships, en route to establishing himself as an elite track and field athlete who competed in the 100, 200, 400 and 800-yard sprints.

Finishing fourth in the 400-metre race at the Canadian Trials in 1928, Lewis qualified for the Olympic Games, but was later replaced by a White athlete – one of countless experiences that reminded Lewis of his roots and of the racism toward Black Canadians at the time.

Though disappointed, Lewis never stopped training, even while working as a porter with the Canadian Pacific Railway. During that time, he could often be found racing his shadow as he sprinted alongside the railway tracks. In order to chase his Olympic dream, Lewis gave up a month’s pay to compete at the 1932 Canadian Trials where he earned his ticket to Los Angeles.

Following Lewis’ bronze-medal win, he received few accolades. But later in life he was called to the Order of Canada (2000), and in 2002 he received the Queen Elizabeth II Golden Jubilee Medal. An elementary school in Hamilton now boasts his name, in addition to a local track and field centre, and the Hamilton Black History Committee now awards the Raymond G. Lewis Sports Leadership Scholarship “to the individual who has accomplished significant achievements in Sports Leadership” each year. 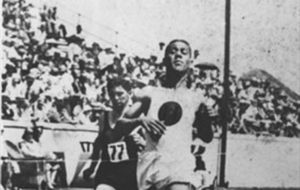 *Over the course of February, we’ll be adding additional athlete profiles. Check back often to help celebrate their triumphs during Black History Month.