Vancouver Whitecaps FC announced on Tuesday that the club has acquired fullback Bruno Gaspar (gash-parr) on loan from Portuguese Primeira Liga club Sporting CP. Gaspar, who will occupy an international roster spot and officially join the club’s roster pending receipt of his International Transfer Certificate (ITC), medical, work permit, and visa, will be on loan through the end of 2021, with a club option to purchase.

“Bruno brings a wealth of experience from a number of very good leagues in Europe,” said Marc Dos Santos, Whitecaps FC head coach. “As we continue to improve our roster piece by piece, Bruno is one part of additional moves we are looking to make. It’s important that we make sure we keep competition at a high level throughout our roster and Bruno will bring that to our team. We are very happy to have him join our club.”

“The Whitecaps fans can be sure I will give 200 per cent in every minute of every game,” added Gaspar. “I am very excited to join this club and can’t wait to play for the city of Vancouver. I look forward to joining my new teammates and can’t wait to get started.”

The versatile fullback, who primarily plays on the right but has seen time on the left side of the backline, most recently helped Olympiacos FC win the 2019-20 Super League and Greek Football Cup competitions while on loan.

Gaspar arrives in Vancouver from Sporting CP, having helped the Portuguese giants capture both the Taça da Liga and Taça de Portugal titles during the 2018-19 season.

The 27-year-old defender has also featured for Olympiacos and Sporting CP in the UEFA Europa League, making seven combined appearances since 2018 in one of Europe’s top-tier club football competitions.

Gaspar made his professional debut in 2013, moving up from SL Benfica’s famed academy program. He played three seasons with Benfica B, before joining Vitória de Guimarães on loan in 2014, a move that was made permanent the following year. Gaspar played one season in the Italian Serie A with ACF Fiorentina in 2017-18, then returned home to Portugal when he was transferred to Sporting CP in 2018.

Born in Évora, Portugal, Gaspar represented his native country at the youth levels, from U-15 to U-21. At the senior international level, Gaspar has made four appearances for Angola, his father’s home country, including three starts at the 2019 Africa Cup of Nations. 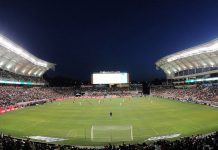