Former Vee and University of Minnesota netminder Jack LaFontaine had a stellar season in between the pipes for the Golden Gophers and is now the winner of the Mike Richter Award, given annually to college hockey’s top goaltender.

LaFontaine was one of the best goaltenders to man the crease in the National Collegiate Athletic Association (NCAA) this season, leading the University of Minnesota to 22 wins in his 29 appearances. The Mississauga, Ontario native has compiled a 1.79 goals against average and a .934 save percentage in those 29 contests with 5 shutouts in his senior season with the Golden Gophers, wearing an ‘A’ on his jersey as well.

The 6’2”, 205-pound goaltender has accumulated numerous accolades throughout his senior season of college hockey, including being named for the Hobey Baker Award as well as being a Senior CLASS First Team honouree.

LaFontaine helped Minnesota earn a Big Ten Championship while being named the tournament’s Most Outstanding Player as well as making the All-Tournament team. Another slew of awards were added to the mantle of LaFontaine in the way of being named the Big Ten’s Best Goaltender as well as a First Team All-Star.

LaFontaine played a key part in his season in Penticton during the 2018/19 campaign, winning 30 games with a 2.19 GAA and a .923 save percentage with 3 shutouts as well in 45 games played. 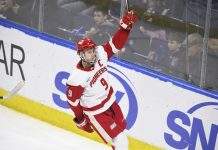