Just under two years ago, shot putter Tim Nedow heaved a 16 pound iron ball beyond the Olympic Qualifying standard of 21.10 metres at a competition in California. Unfortunately for the DePaul University graduate, the massive throw came 11 days before the start of the qualification period for the Tokyo games. Nedow rectified the situation this past Saturday afternoon at a competition in Fleetwood, Pennsylvania where he once again surpassed the Olympic Standard with his winning throw of 21.11 metres. The effort all but secures a spot for the 2019 World finalist to compete in Japan this August.

Another athlete vying for a spot in Tokyo this summer is sprinter Lauren Gale. The Colorado State University junior has been setting lifetime bests all over the track this season, picking up another two this past Saturday. Competing at the Colorado University Invitational in Boulder, Gale set new bests in both the 100 and 200 metre events en-route to victory. Gale led a Colorado State sweep of the 100 metre medals with her winning time of 11.67 seconds besting her previous best set back in 2018 by over four tenths of a second. Similarly, Gale trimmed nearly four tenths off her outdoor best over 200 metres with a winning time of 23.61 seconds. Both marks come on the heel of Gale’s school record performance of 52.24 seconds last week over 400 metres Her recent marks now put the 21 year old at #5, #4, and #2 in Club history for the 100, 200, and 400 metres respectively.

Also moving up in the Club’s all-time rankings was decathlete Ryan Thomsen who won the Hillsdale Invitational in Michigan with a score of 6486 points – moving to seventh in Club history. With top marks in both the long jump and shot put, Thomsen finished among the top three in nine of the ten events. For his efforts, Thomsen was named the Great Midwest Athletic Conference Track athlete of the week and provisionally qualified for the NCAA Division II Championships. 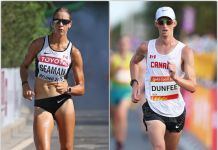