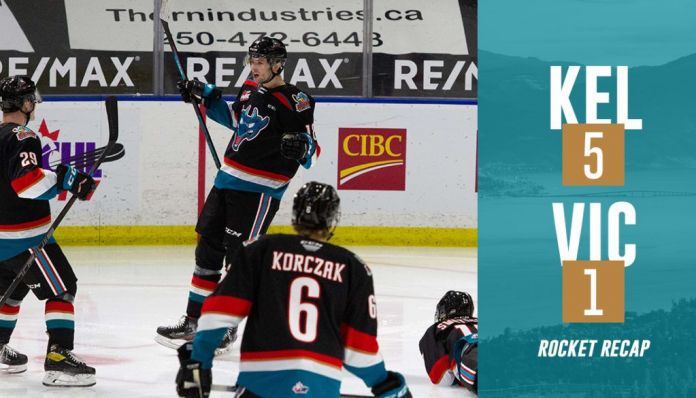 The Victoria Royals were unable to overcome a three-goal deficit to the Kelowna Rockets on Tuesday night as they fell 5-1.

The Kelowna Rockets picked up their third straight win with a 5-1 victory over the Victoria Royals on Tuesday night at Prospera Place.

Overage forward David Kope led the charge with a goal and two assists, while 16-year-old goaltender Nicholas Cristiano made 31 saves to pick up his first WHL win in his first start.

FIRST IN THE DUB: Goaltender Keegan Maddocks received his first start in the WHL tonight. The Langley, BC native was an eighth-round pick of the Royals in the 2018 WHL Bantam Draft. Maddocks spent the 2019-20 season with the Delta Hockey Academy U18 Prep Team.

ROOKIE POINT PRODUCTION: The Royals have 12 rookies on their roster this season, and the first-year players have been contributing on offensive end. Freshman players have contributed 32 points (8g-26a) for the Island team out of the 90 total points from Royals’ players this year. This accounts for 36% of Victoria’s total points. With their 26 assists Royals’ rookies have contributed 46% of the team’s total assists for the year.

July 25, 2021
Canada Soccer’s Men’s National Team had a strong team performance to defeat Costa Rica 2:0 in the 2021 Concacaf Gold Cup Quarterfinals. With the...

July 25, 2021
The Seattle Kraken announced multi-year deals for defensemen Adam Larsson and Jamie Oleksiak and goaltender Chris Driedger, all of whom were selected by Seattle in the 2021 NHL Expansion Draft.Larsson joins the Kraken...