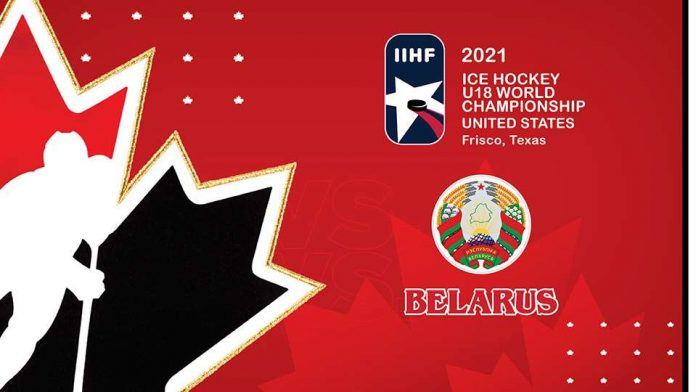 It was a fight for first place, but in the end Canada was just too strong. Using two first-period goals to build momentum, Canada defeated Belarus 5-2 to finish first in Group A and earn a quarter-finals date with the Czech Republic.

“It was a hard-fought game,” said Canadian coach Dave Barr. “We had to work for everything we got. We’re very happy with the way we played, and that’s going to be a very tough team to kick out in the quarter-finals.”

Belarus finished in third place and will play second-place finisher from Group B.

“It was a good game, and we created plenty of scoring chances, but we took too many penalties and Canada scored when they had a chance,” said Belarus coach Dmitri Shulga. “Overall, I’m satisfied with the way we played. The guys have gotten used to the size of the rink and are in good shape. We’re looking forward to the quarter-finals.”

The two captains led the way. Shane Wright, the captain elect, was back in the lineup after missing two games with a lower-body injury, scored twice, as did Mason McTavish, the player who wore the “C” in Wright’s absence. Defenceman Olen Zellweger chipped in with a goal and assist.

“We talk about the positives at the end of the game,” Barr added. “We were tired. That’s four games in five days for us, and we talked about that. It’s easier to forecheck than back check, so let’s keep the puck in front of us. We’re very happy with where we’re at. I think that’s the happiest I’ve been with our effort of trying to do the details that we’re asking.”

Canada got the perfect start, scoring the opening goal for the fourth straight game. This came on a lovely play from Wright, who stripped Danila Klimovich of the puck in the Belarus end and fired a quick shot that beat an unsuspecting Yan Shostak in goal. Shostak, just 16 years old, was seeing his first action of the tournament.

As so often happens, the goal came only moments after Belarus hit the post on a second chance after a generous rebound from Benjamin Gaudreau, who had a fantastic game in goal for the Canadians.

“He’s a great goalie, and we’re lucky to have him,” defenceman Corson Ceulemans said. “He was huge for us tonight. If we didn’t have him, it would have been a lot closer game than it was.”

In the middle of the period, Klimovoch had a great chance to make amends for his giveaway. This time it was he who took advantage of a Canada turnover at centre ice when Brennan Othmann overskated the puck, giving Klimovich a clear path to the net. His quick shot was stopped by Gaudreau’s rapier-like blocker.

Zellweger made it 2-0 Canada at 18:34. He had two chances, and on the second one wired a shot under the stick of Shostak to double the lead.

Canada wasted no time in doubling its lead again early in the second, and again it came after a sensational scoring chance for Belarus. Zellweger lost the puck at the offensive blue line and Fyodor Nikolayenya dashed the length of the ice on his own, only to be stoned once again by Gaudreau. Moments later, McTavish blew up the middle and ripped a shot past Shostak at 1:59 for a 3-0 lead.

Two minutes later, Zellweger made a great pass to Wright from behind the Belarus net, and Wright made no mistake with his point-blank shot. And then, like a conductor acknowledging a virtuoso solo by a cellist, Wright pointed long and hard at Zellweger for his beautiful assist.

The goal signalled the end for Shostak, who was replaced by Ivan Zhigalov. And to Belarus’s credit, they continued to fight and were eventually rewarded. Miroslav Mikhalyov made a fine pass from behind the net to Andrei Loshko, and he wasted no time putting it in the net on a power play to make it a 4-1 game.

Any hope that that goal would start a comeback was dashed in the third. Canada played a tenacious period and then Belarus ran into serious penalty trouble, giving Canada two 5-on-3 situations and incurring a major and game misconduct thanks to a Danil Rogach cross-check. McTavish capitalized midway through the major to make it a 5-1 game.

Ilya Morozov got that goal back with a nice finish to a Miroslav Mikhalyov pass at 17:28, and soon after Canada was awarded apenalty shot when Dylan Guenther was hooked on a breakaway. He fired the freebie wide.