Boqiao Li was one of the 20,000 international student-athletes who are enrolled at NCAA schools. Born and raised in China, he spent the last several years abroad in the states, mainly to play the sports he fell in love with when he was a teenager. Now, the Lions’ second-round selection from this year’s inaugural Global Draft has a chance to make an impact in the CFL and beyond.

Li is currently at home in Beijing preparing for the 2021 BC Lions training camp. Like many recent draft picks and newly signed players, it’s a season we’ve all been anticipating for more than a year. But it’s a little different for Li and a few other global selections because football is still a niche sport where they come from. To be able to hear their names get called was truly a dream come true.

Steven Chang with bclions.com caught up with Li via ZOOM for an interview in Mandarin.

“I’ve been preparing for the draft for a long time, I was really excited that day knowing I’ll be going to B.C. to play football,”  recalled Li on this year’s Global Draft.

When he was introduced to football as a teenager, he knew he was going to play this game for quite some time.

“When I was 15, football just arrived in China. There was a new local team named the Cyclone, so I went and experienced it. I was like, ‘okay, I can get used to liking this sport.’ After I tried it, I liked it. Then I’ve been playing ever since until now,” Li said.

Right out of high school in China, Li had a desire to play football in the states. The University of Charleston in West Virginia allowed Li to experience football in a much faster, competitive environment.

Li chose to study abroad to not only strictly focus on education, but he also wanted to get a real taste of football in North America. His 6’3’, 240-pound body frame went head-to-head with other athletes all over the world. Looking back at all the experience he absorbed from competing in NCAA, Arena Football League in China and the U.S., plus representing China for the NFL Pathway Program and China’s national rugby sevens team, Li is grateful for his college coaches for giving him an opportunity at Charleston where it all started. 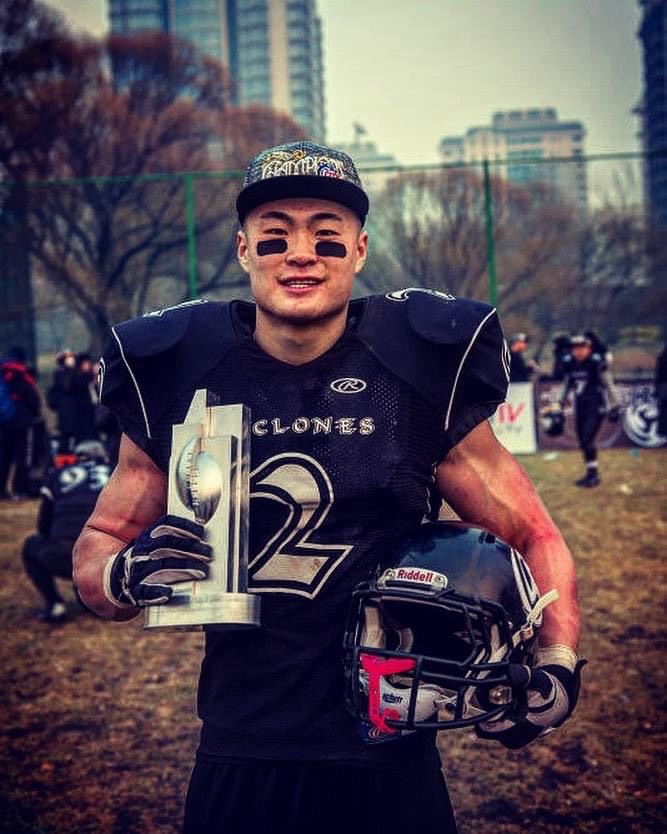 “I think my coach from college helped me a lot. He gave me a chance, a scholarship to play football and study in the states. You could say in English that, ‘it was a blessing.’ I wouldn’t call it life-changing, but it was a huge milestone to allow me to show what I’m capable of. It was an important step,” Li said.

While playing and studying aboard, Li said he experienced some culture shock in the U.S. when he first arrived, since he was raised in Beijing. But nothing too overwhelming, as he quite enjoyed living in different states such as West Virginia, Georgia, and Florida. Plus, he has relatives who are living in Seattle and Vancouver to make him feel comfortable when he’s homesick.

Now with a chance to play in the CFL, his goal this season is to contribute to the team in every possible way on the defence. As he is open about his faith, he believes that his hard work would eventually pay off and lead him to whatever lies ahead.

Outside of training, Li is helping out for a nationwide youth football program in China called Skyway American Football Academy. He said it’s important to pass down the love of football to the next generation.

“Youth are our future. I’m giving them my passion for football, my experience and providing them with the best training to help the next generation of football players so the sport can continue to grow in China,” Li added.

He said football in China is growing because NFL China plays a vital role. But not many people are aware of CFL in China, and he hopes to change the unfamiliarity of Canadian football in his homeland. If he could make an impact on the field, it’ll be the first step to get people talking.

“Only my family and friends know I was drafted,” he laughed.

“I’m going to work hard to see where God will take me next,” he added.

June 15, 2021
The South Island Youth Cricket League kicked off their 2021 season this past weekend with the long-awaited opening match of SIYCL’s new Junior B...