Patterson is a native of La Ronge, Saskatchewan and was a 7th round draft pick of the Calgary Flames.

After completing a 4-year junior career with the WHL’s Saskatoon Blades, Patterson embarked on a 8-year professional career which included stops in the AHL, ECHL, Norway, France and England.

Patterson has spent the past 3 seasons on the coaching staff of the SJHL’s La Ronge Ice Wolves.

The hiring of Patterson was equally as exciting for the first year franchise. “The addition of Gaelan is a huge step for the Bombers. He’s experienced at the Jr A level, experienced as a player, and motivated to help develop players and move them on. We’re thrilled with what he will bring to our group.” said Joe Martin.

Patterson will officially join the Bombers in August. 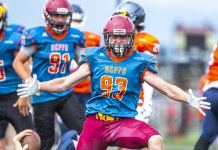