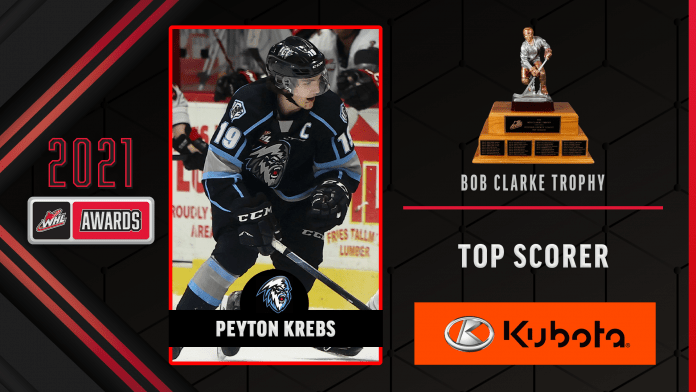 The Vegas Golden Knights prospect totalled 43 points (13G-30A) in 24 games played during the 2020-21 WHL season, finding the scoresheet in all but one of his outings as he set a new ICE franchise record by recording a 23-game point streak. In addition to his league-leading assist and point totals, Krebs finished second among WHL skaters in power-play goals (eight) and tied for fourth in power-play assists (13).

The product of Okotoks, Alta. is the first member of the ICE franchise to win the Bob Clarke Trophy, and the fourth East Division skater to claim the award in the past six seasons. Moose Jaw Warriors forward Jayden Halbgewachs won the trophy as league scoring champion during the 2017-18 WHL season, while Regina Pats teammates Adam Brooks and Sam Steel were back-to-back victors in 2015-16 and 2016-17, respectively.

“Kubota Canada is thrilled to be the presenting sponsor for the WHL 2020-21 Top Scorer award. Even though the season was abbreviated, we saw some great performances this season and it gives me great pleasure on behalf of Kubota’s employees and the Kubota dealers across Canada to congratulate Peyton Krebs as this year’s WHL Top Scorer!,” said Catherine O’Brien, Brand Manager for Kubota Canada Ltd. “Well done, Peyton!”

Krebs has been a premier WHL talent since recording an assist in his debut November 16, 2016. In 199 WHL regular season games, he has amassed 231 points (62G-169A), including 26 power-play goals, two short-handed goals and 14 game-winning goals. The ICE originally selected Krebs with the first overall pick in the 2016 WHL Bantam Draft. He was selected in the first round, 17th overall, by the Vegas Golden Knights in the 2019 NHL Entry Draft.
The Bob Clarke Trophy, awarded annually to the WHL’s Top Scorer, is named after the WHL and NHL legend known to many as one of the toughest and most skilled to ever play the game. Clarke played two seasons in the WHL and captured the WHL scoring title in both those campaigns. The 1967-68 WHL season saw Clarke collect an astounding 168 points (51G-117A) in 59 appearances. During the 1968-69 season, Clarke registered 137 points (51G-86A) in only 58 games as he helped his hometown Flin Flon Bombers claim the 1969 WHL Championship.

From there, the product of Flin Flon, Man., went on to play 15 NHL seasons with the Philadelphia Flyers, including captaining the Club to two Stanley Cup Championships. He was awarded the Hart Trophy as NHL MVP on three occasions and was named an NHL All-Star four times.