In a partnership that will benefit two NHL franchises, an American Hockey League franchise and some-two dozen young players hoping to make the big clubs, the Kraken announced the AHL Charlotte Checkers as their affiliate professional development team for the 2021-22 season in partnership with the NHL’s Florida Panthers.

“The AHL plays such a key role in the development of NHL players,” said Ron Francis, Kraken GM. “This is a very important decision for the long-term success of our organization.”

Francis and Kraken assistant general manager Ricky Olczyk talked with several NHL organizations about a player-share arrangement for the upcoming AHL season when construction issues prompted Oak View Group and the Kraken to adjust with a revised Coachella Valley location and timeline for a brand-new, state-of-the-art arena in Palm Desert.

The Kraken were previously awarded the AHL’s 32nd franchise. The Palm Springs franchise (team name to be announced) will begin its inaugural season at the Coachella Valley arena in the fall 2022. Construction for the privately-funded project broke ground in early June and will be ready on time for hockey, concerts, family entertainment, other sports and more. 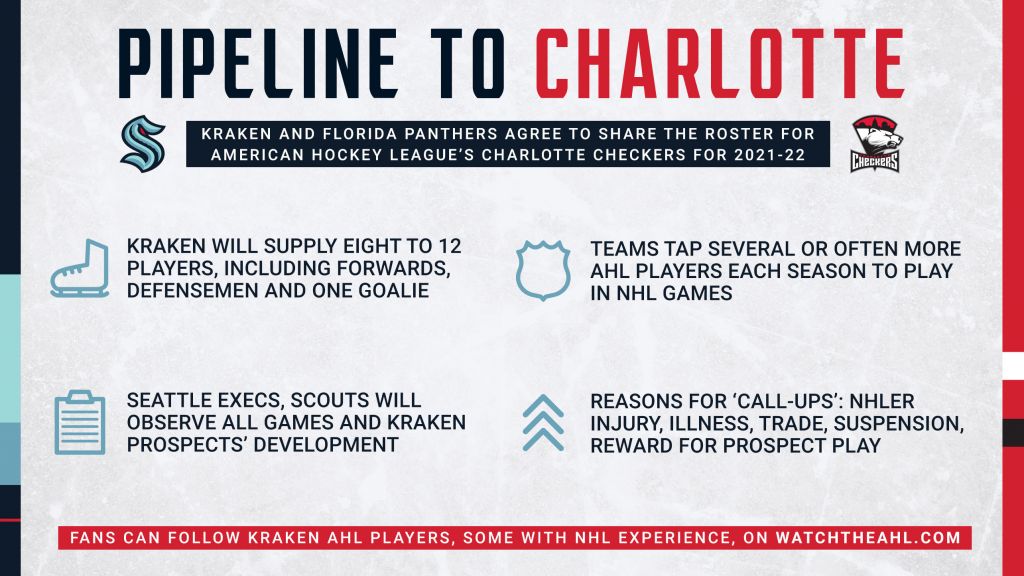 Securing an affiliation for the upcoming season was essential. The Kraken will select 30 players in the July 21 NHL Expansion Draft, but only 20 players (18 skaters and two goalies) dress for games, while up to three more players on the active roster are designated “scratches” game by game.

Doing the NHL math, that means some players from the original group of 30 will skate for the AHL affiliate if they are still under contract with the Kraken, along with other free agents the Kraken might sign to AHL deals or, in some cases, two-way agreements that pay one salary for AHL and a higher amount for NHL.

In fact, 10 players drafted by Vegas in 2017 never played an NHL game for the Golden Knights. Another five played 60 NHL games or less.

One note: All prospects selected in the 2021 NHL amateur draft must return to juniors or college ranks if they aren’t placed on the NHL active roster. A rare few draftees make opening night NHL rosters and stick for the season-almost always high first-round choices. If any 2021 draftees who make opening night rosters are subsequently rerouted to a developmental league, it must be juniors or college. No 2021 draft choice is eligible for the AHL or pro league ECHL (second tier) until his second season.

Yet the active 23-man roster this coming season will need reinforcements with Francis and the Kraken hockey operations group recalling players from AHL Charlotte due to injury, illness, suspension, trades, potential shakeups in the lineup and sometimes as a reward for Checkers players developing at a faster pace than anticipated.

“The AHL is such a vital component to building our team and having success on the ice,” said Olczyk. “It’s our foundation, our bloodline.”

Olczyk said the Kraken will supply eight to 12 players to Charlotte, including one goalie along with forwards and defensemen. It is typical for NHL teams to “call up” several or more players from the AHL during the course of the 82-game regular season. Some players will be called up more than once, shuttling a bit between the two leagues.

While Florida names the coaching staff, Olczyk said “we will have lots of eyeballs on Kraken prospects at all games,” along with training camps and workouts. It is common with a shared AHL affiliate for each team’s player development group to be in frequent discussion and communication with prospects belonging to their clubs.

The Charlotte connection was appealing to the Kraken brass. Francis, Olczyk and Kraken director of amateur scouting Robert Kron all worked with Charlotte’s leadership group when the AHL team was an affiliate with the Carolina Hurricanes and the Kraken trio worked for the NHL franchise.

“We are obviously familiar with [CEO and owner] Michael Kahn and the Charlotte Checkers as well as the area,” said Francis, former Carolina GM who also captained the Hurricanes to a Stanley Cup Final in 2002 during his playing days. “This agreement helps ensure we can loan all of our prospects to one place rather than multiple locations. We would like to thank both Charlotte and the Florida Panthers for their cooperation to make this happen.”

“We are excited to work with Ron Francis again as we help develop the inaugural group of Seattle Kraken prospects,” said Kahn. “We feel the partnership between ourselves, the Kraken and our primary affiliate, the Florida Panthers, will give the Checkers a strong pool of players for the upcoming season.”

“We are looking forward to welcoming Seattle to the NHL and utilizing this partnership to create an ideal environment for our prospects to train and compete in Charlotte,” said Zito. “We can’t wait for the puck to drop in Charlotte.”

For his part, Wilkinson, a former NHL goalie, says Francis’ “really high standards of hiring good quality people” is a huge plus for the three-way partnership. “There might be times when we might not exactly see eye to eye, but with all good quality people in place we can solve it together,” said Wilkinson.

Wilkerson has his own expansion team story to tell. He was selected in the seventh round by the Tampa Bay’s first-ever amateur draft in 1992 ahead of the Lightning’s 1992-93 season. Defending Stanley Cup champion Tampa Bay begins the 2021 Stanley Cup Final at home Monday, facing surprise finalist Montreal (5 p.m., NBC Sports Network).

Wilkinson played two more years in juniors and a full season in the International Hockey League, an AHL alternate option back then, before splitting time between Tampa Bay and his IHL teams for the next four seasons, appearing in 22 NHL games.

“You do your best every day for the chance to go up to the big club,” said Wilkinson. “Sometimes I was playing well in the IHL and I didn’t get called up. Other times I wasn’t playing so great and got the call because of injuries.”

The American Hockey League is “arguably the second-best hockey league in the world,” said Wilkinson and without question the most directly relevant league for developing NHL players.

“The AHL effect of the on-ice product is obvious,” said Wilkinson. “Top draft choices on opposing teams every night [once they can play their first pro season].

“Away from the ice surface is where there is so much value. Players learn how to be pros. European players who have never lived in North America get accustomed to the life and maybe need to learn the language too.

“There is so much personal growth for players. They live on their own, in their own apartments, managing their food, learning how to cook, buying a car, asking guys in the locker room why a certain insurance is needed, getting involved in the community.”

It’s all part of maturing as Kraken prospects, along with working and training daily to get better as players.

“They will all have special hockey skills,” said Wilkinson about the 2021-22 Charlotte Checkers team that will feature Kraken and Florida prospects. “Stepping on the ice is usually the easiest thing for them. It’s always about getting bigger, stronger, faster. Finding their way in life off the ice is real growth.” 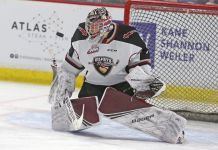 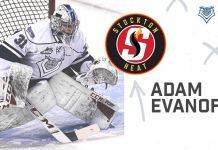