Denis Shapovalov saved his best for last on Wednesday at Wimbledon, reaching his first career Grand Slam semi-final with a five-set comeback win at the All-England Club.

The young Canadian trailed by two sets to one in his quarter-final against Karen Khachanov, but managed to keep his level high will his opponent tailed off late, ultimately emerging victorious 6-4, 3-6, 5-7, 6-1, 6-4.

Khachanov had played a five-set epic in the round of sixteen on Monday, while Shapovalov had cruised through his last few matches. The energy levels showed in the decisive moments as the Canadian out-hit his 6’6 opponent in the last two sets.

Despite the pressure, Shapovalov stayed calm, pounding 59 winners. While he did commit 48 unforced errors, he benefitted from 50 off of the racquet of the Russian. His serve was a difference-maker, as he hit 17 aces and won an astounding 86 percent of his first serve points.

Even if his break point conversion left something to be desired, he kept the pressure on the Khachanov serve, creating 19 break points, more than double the number he faced. He also won an impressive 40 percent of the Russian’s serve points.

Shapovalov joins Milos Raonic as the only Canadian men to reach the semi-finals of a major in the open era, although Félix Auger-Aliassime could join them later this afternoon.

As expected, the servers cruised through the early service games.

The first opportunity for a returner came when Shapovalov’s serve started to flicker in and out at 2-3. The Canadian double-faulted twice as he went down love-40, and threw in a third at deuce, but he rallied to save all four break points in the game, three of them with unreturned serves.

While Khachanov failed to convert four break points in the set, Shapovalov took advantage of his lone opening.

At 4-all, the 10th seed finally got himself into a Khachanov service game and converted his lone break points of the set, following a big return into the net and putting away the volley to take the lead.

He easily closed out the opening set 6-4 with a hold to love.

Khachanov rebounded quickly in the second set, breaking twice on his way to a 4-0 lead.

He briefly dropped his level to allow Shapovalov to get one of the breaks back, but it was not enough as the Russian hung on to take the set and level the match.

The third set was the inverse of the first, with Shapovalov getting break chances in the middle of the set before Khachanov pulled ahead late.

After the Canadian missed a pair of break points at 4-3, he double-faulted to give Khachanov a break point at 5-all before missing a forehand with to give away the late break.

Serving for the set, the Russian was tentative and had to save a break point, but ripped a big forehand winner and went on to hold, taking a two-sets-to-one lead.

Khachanov appeared to tighten up as he approached the finish line and errors began to creep into his game in the fourth set, while Shapovalov upped his level.

From 1-all in the fourth, the Canadian took full control, winning five straight games, including a pair of breaks, to send the match to a deciding set.

Shapovalov was cruising on serve and had more chances to break at 4-all. After missing a pair of returns and sending a forehand long, he was rewarded on his fourth break point of the game when Khachanov sent a forehand long of his own to set up the Canadian to serve for the match.

His great run of serving was not about to stop with the match on the line, as Shapovalov easily held to book his place in the last four of a slam for the first time in his career.

Shapovalov had only won one match at Wimbledon as a professional before the 2021 Championships.

Shapovalov will be the massive underdog in the semi-finals, where he will take on top seed and two-time defending champion Novak Djokovic. The world number one leads their head-to-head 6-0.

Regardless of the result, Shapovalov will return to the Top 10 in the ATP rankings on Monday. 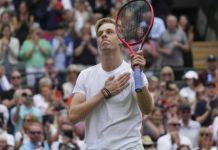 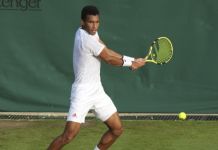