Alphonso Davies will miss the 2021 Concacaf Gold Cup through injury after he hurt his ankle in training earlier this week. Davies has returned to his club FC Bayern München to begin his recovery ahead of the 2021-22 season.

Davies was preparing for his third Concacaf Gold Cup, having helped Canada reach the Quarterfinals in both 2017 and 2019 and being named the Top Young Player in the 2017 edition. He was the 2020 Canada Soccer Player of the Year as well a multiple Canadian Athlete of the Year award winner including the Lionel Conacher Award and Lou Marsh Memorial Trophy. Through six international matches in 2021 with Canada Soccer’s Men’s National Team, he has four goals and a team-best five assists.

The Concacaf Gold Cup runs from 10 July to 1 August, with Canada’s opening group stage match on 11 July against Martinique in Kansas City, KS, USA. Canada will also face Haiti on 15 June and USA on 18 June in the group phase. 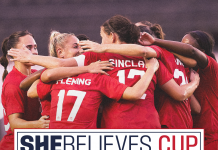