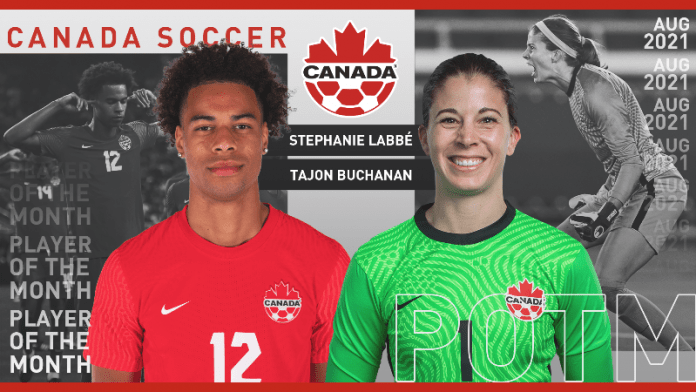 Tajon Buchanan and Stephanie Labbé have been named Canada Soccer’s Players of the Month for August 2021. Buchanan from Brampton, Ontario scored three goals and an assist in August for Major League Soccer’s first-place New England Revolution while Olympic champion Labbé from Stony Plain, Alberta was the goalkeeping hero that beat Sweden in the Gold Medal Final at the Tokyo 2020 Olympic Games.

It was a historic tournament for Canada Soccer’s Women’s National Team who attracted a peak national audience of 4.4 million viewers live on CBC, with an additional 725,000 live video views on digital platforms, making this Canada’s most-watched moment at the Tokyo 2020 Olympic Games. Canada Soccer’s Women’s National Team are the first Canadian team to win three consecutive medals at the Summer Olympic Games and just the third nation in the world to win three medals in women’s soccer.

Labbé made five appearances at the Olympic Games, including both the Semifinals against USA and Gold Medal Final against Sweden. She posted a clean sheet in the 1:0 win against USA and then was the hero on kicks from the penalty mark against Sweden, making saves against both Anna Anvegård and Jonna Andersson. It was the second time at the Olympic Games that Labbé made two saves on kicks from the penalty mark, also stopping Brazil’s Andressa and Rafaelle in the Quarterfinals on 30 July.

Coming off a Semifinal finish with Canada at the 2021 Concacaf Gold Cup in July, Buchanan helped New England Revolution maintain first place in Major League Soccer. He made five appearances with four wins and one draw, with goals in three successive appearances against Toronto FC (at BMO Field), DC United, and FC Cincinnati. Buchanan was an MLS Team of the Week selection for both Week 19 and Week 21..

Buchanan made a record-setting transfer from the New England Revolution to Belgium’s Club Brugge in August. Buchanan will finish the 2021 season in MLS, continuing to chase an MLS Supporters’ Shield and MLS Cup, then join his UEFA Champions League side at year’s end. Buchanan is one of five Men’s National Team players attached to UEFA Champions League clubs for the 2021-22 season alongside Jonathan David of Lille OSC, Alphonso Davies of FC Bayern München, and both Atiba Hutchinson and Cyle Larin from Beşiktaş JK.

Looking ahead to the month of September, Canada Soccer’s Men’s National Team will play three FIFA World Cup Qualifiers as they kick off the Concacaf Final Round on the road to the FIFA World Cup Qatar 2022. Tickets for Canada’s two home matches at BMO Field in Toronto are available via Ticketmaster.ca, with the first match on Thursday 2 September against Honduras and the next match on Wednesday 8 September against El Salvador. In between the two home matches, Canada will play away against USA in Nashville, TN on Sunday 5 September.