Pascal Dion reached the World Cup Short Track podium in dramatic fashion on Sunday, winning bronze in the men’s 1000m in a photo finish. Dion (1:26.621) edged out Japanese skater Kazuki Yoshinaga by only one one-thousandth of a second to earn the second individual distance medal of his career.

The Montreal native took an early lead in the final – a strategy that helped him successfully advance through the two previous rounds – but was passed by a pair of skaters with four laps remaining. He stayed within striking distance for the remainder of the race and outstretched Yoshinaga at the finish line to win by the slimmest of margins.

It’s not the first time the 27-year-old Dion has reached the podium at an Olympic test event. He captured his only other career medal – silver in the 1000m – at the 2017 World Cup in Gangneung, South Korea, which was the test event for Pyeongchang 2018. Dion would go on to help Canada capture bronze in the men’s relay at those Games.

Canada also took part in three B Finals on Sunday, helping them earn valuable World Cup points. Kim Boutin was the top female skater, earning a fifth-place result in the B Final of the 1000m. The women’s and mixed relay teams also participated in B Finals, earning second and third place results, respectively.

Meanwhile, yesterday’s silver medalist in the 1500m Courtney Sarault was unable to advance past the quarterfinals of the 1000m. And veteran Charles Hamelin unfortunately did not participate in his 1000m ranking final race earlier in the day due to an equipment issue that couldn’t be addressed before the officials started the race. 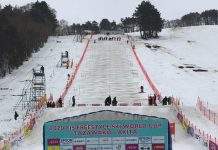 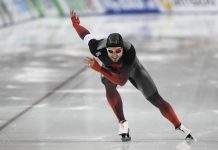