The reigning champion Laval Rouge et Or look to retain their title as the U SPORTS Women’s Rugby Championship opens in Kingston later this week.

The Rouge et Or, who have gone undefeated this season, are eyeing their second U SPORTS banner to become the first back-to-back champions since the Lethbridge Pronghorns won three consecutive titles from 2007-2009.

Full draw results, a championship schedule and team-by-team previews are available below.

The 2021 U SPORTS Women’s Rugby Championship Presented by Queen’s University, kicks off on Wednesday at Nixon Field and concludes next Sunday with the gold-medal game at 3:30 p.m. ET / 12:30 p.m. PT.

Digital coverage can be accessed on cbcsports.ca the free CBC Gem streaming service and the CBC Sports App for iOS and Android devices. 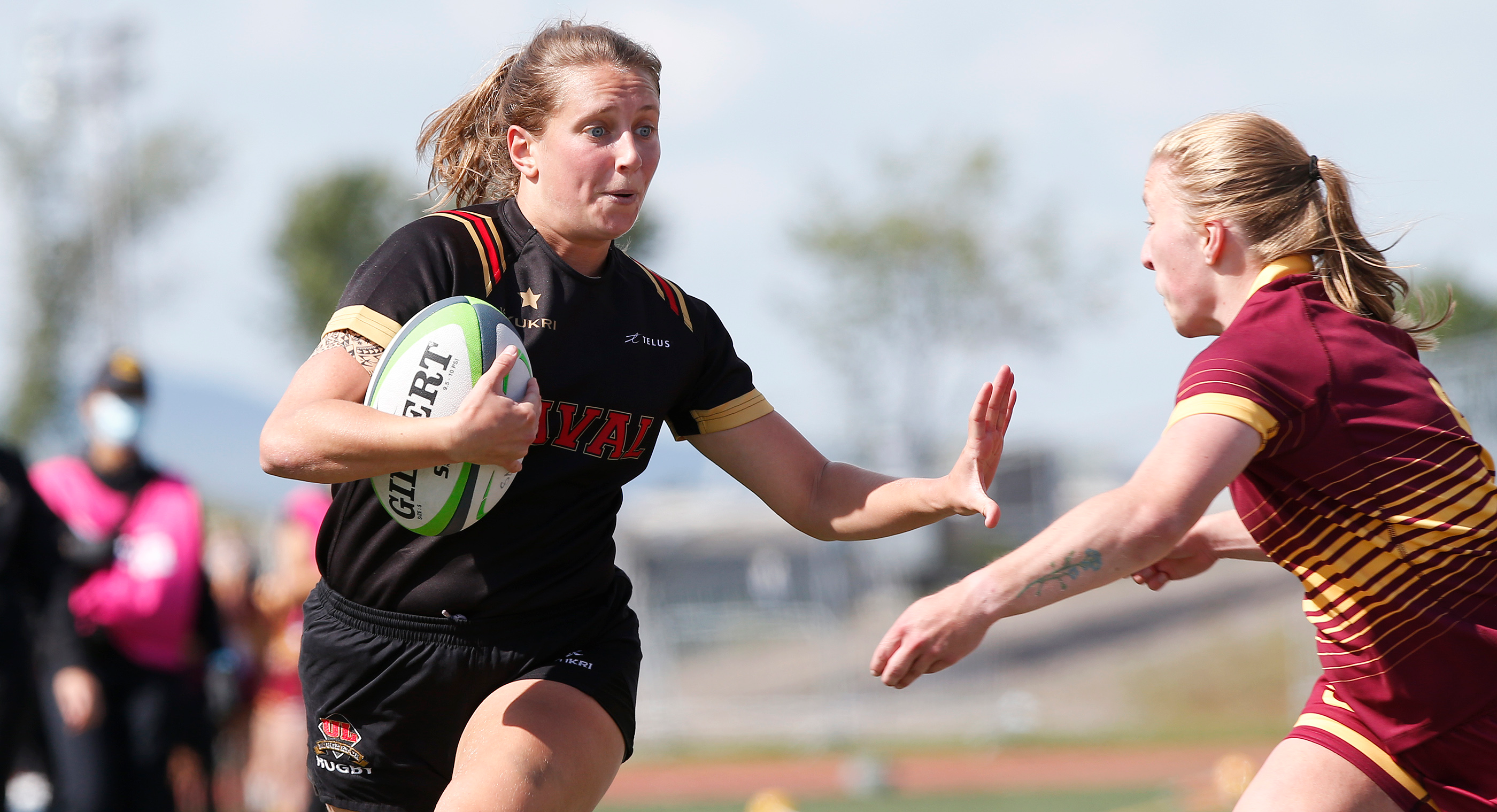 Those teams met again in the conference final, and the Rouge et Or ended the six-year streak of the Gee-Gees by winning their first Quebec title in 10 years. Laval’s 280 points scored and 23 allowed were tops in the Quebec conference.

After a year lost due to the pandemic, the Rouge et Or saw several of its 2019 veteran national champions leave the team to make way for many new rookies, who were quick to demonstrate that they were ready to carry on the winning tradition of recent years.

One of the veterans, Nele Pien, became the second consecutive Rouge et Or member to win the RSEQ most valuable player Award. 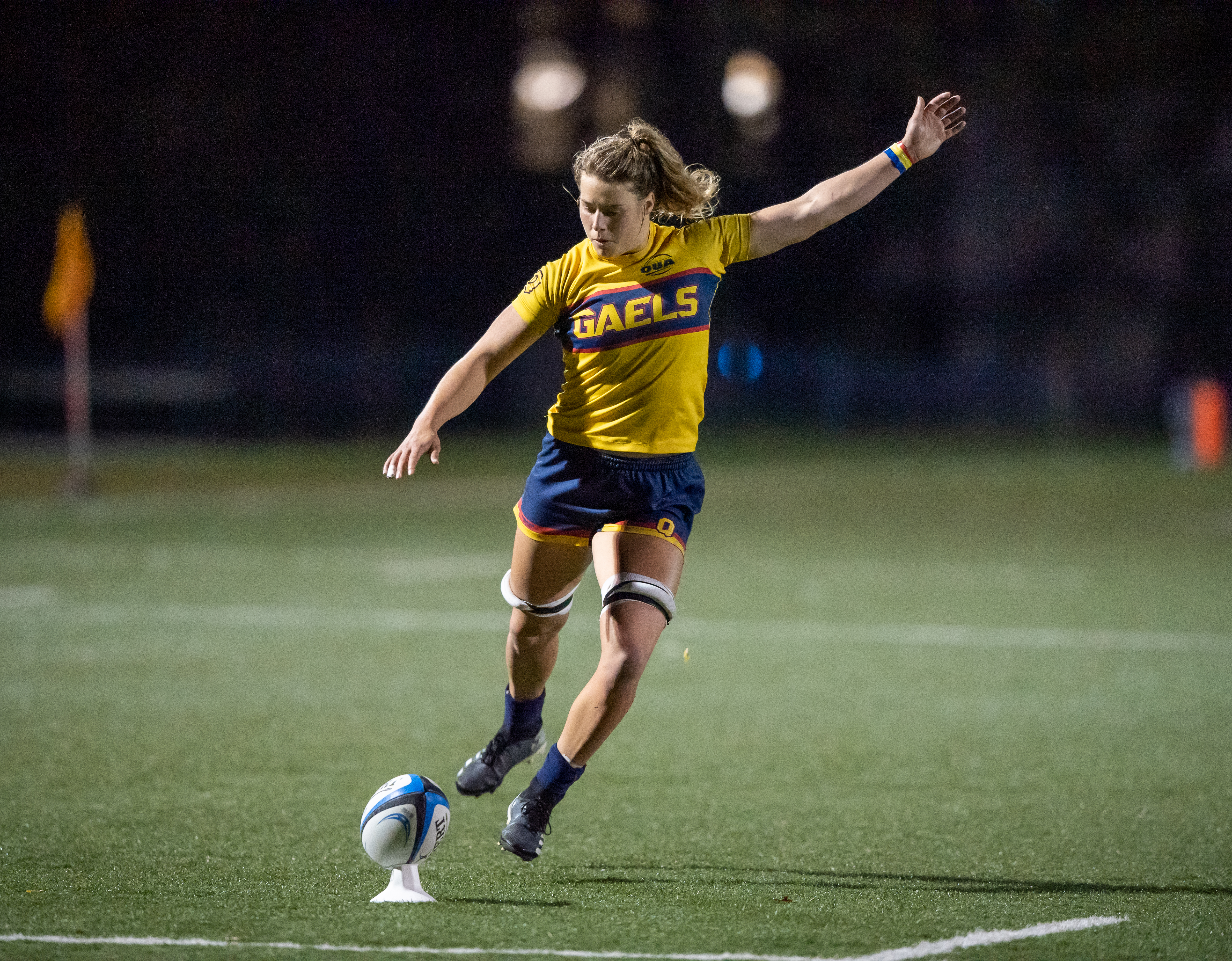 After the Queen’s Gaels went undefeated in the regular season, averaging a nation’s best 51 points per game, the conference powerhouse was upset by the Guelph Gryphons in the OUA final, losing 32-23.

Despite dropping the conference title match, the Gaels enter the U SPORTS Women’s Rugby Championship as one of the top teams in the tournament due to their offensive firepower and balanced defensive corps.

Not only did Queen’s take the top spot in the Shiels Division, senior back row Sophie de Goede added another historic chapter to an already decorated university career. For the third straight season, de Goede got the nod as the Shiels Division player of the year, coming off a 52-point season.

de Goede spent the 2020 season playing with professional team, Saracens Women, based in London, England. The Saracens Women play in the Premier 15s, the top tier of England’s rugby system.

de Goede’s teammate Chloe Daniels was named Shiels Division Rookie of the Year and joins their fifth-year sister, Hannah for a chance to take gold in the U SPORTS Women’s Rugby Championship. 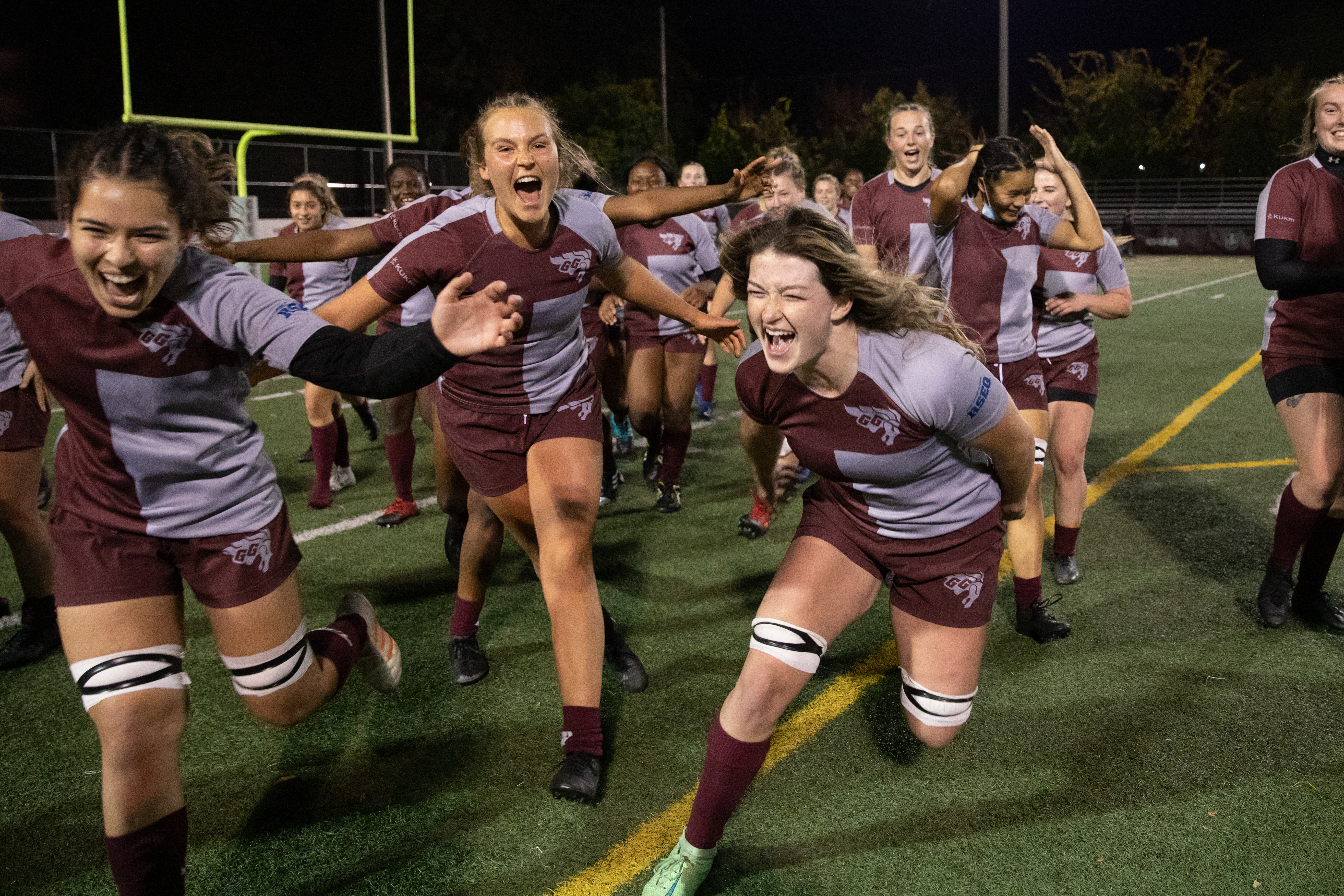 The Gee-Gees finished the RSEQ regular season with a 4-2 record, good for second place in Section A. They squared off with Montreal in the playoff semi-final, winning 37-7 on home turf to secure their spot at the National Championship.

Prior to dropping the RSEQ championship to Laval by a score of 27-17, The Gee-Gees won gold in six consecutive conference championships.

Alexandra Ondo led the Gee-Gees the way with nine tries during the 2021 regular season. The fifth-year student-athlete is a four-time conference First-Team All-Star and a three-time U SPORTS All-Canadian. 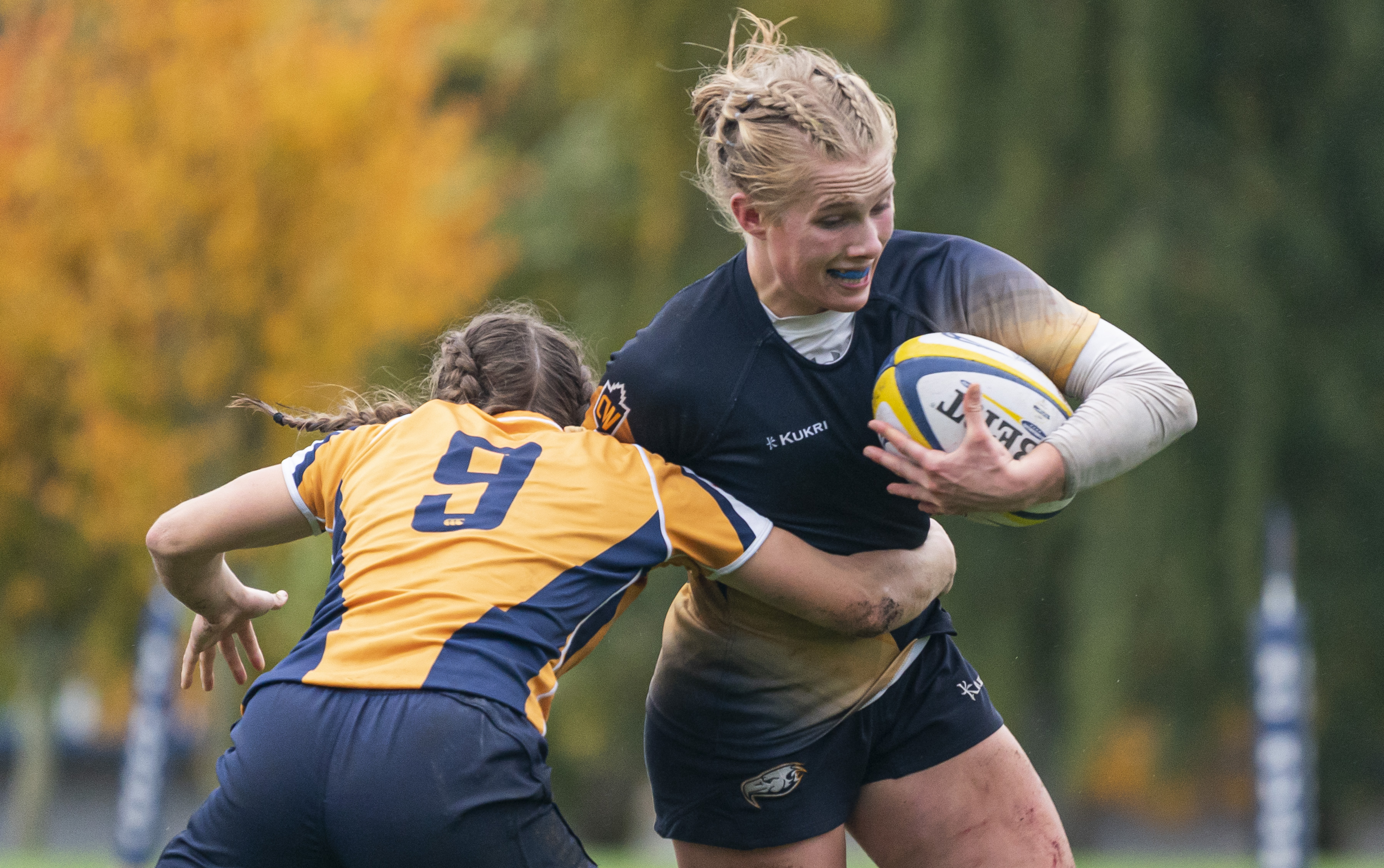 The UBC Thunderbirds enjoyed a successful 2021 Canada West campaign thanks to some convincing victories that saw them outscore their opponents 241-55 in regular-season action en route to a perfect 5-0 record.

The T-Birds carried that consistency and momentum forward into the postseason which began with a 22-12 win over the host Calgary Dinos in the Canada West semifinals before defending their conference title three days later. It was a close match in the opening half but the T-Birds exploded out of the gates after the break and rattled off 40 consecutive points to earn the decisive 47-13 victory over the University of Victoria Vikes in the championship final.

Second-year fly half Savannah Bauder has consistently made her presence felt in leading the conference with 82 points scored this season in helping the T-Birds finish with a 5-0 record before defending their Canada West title. 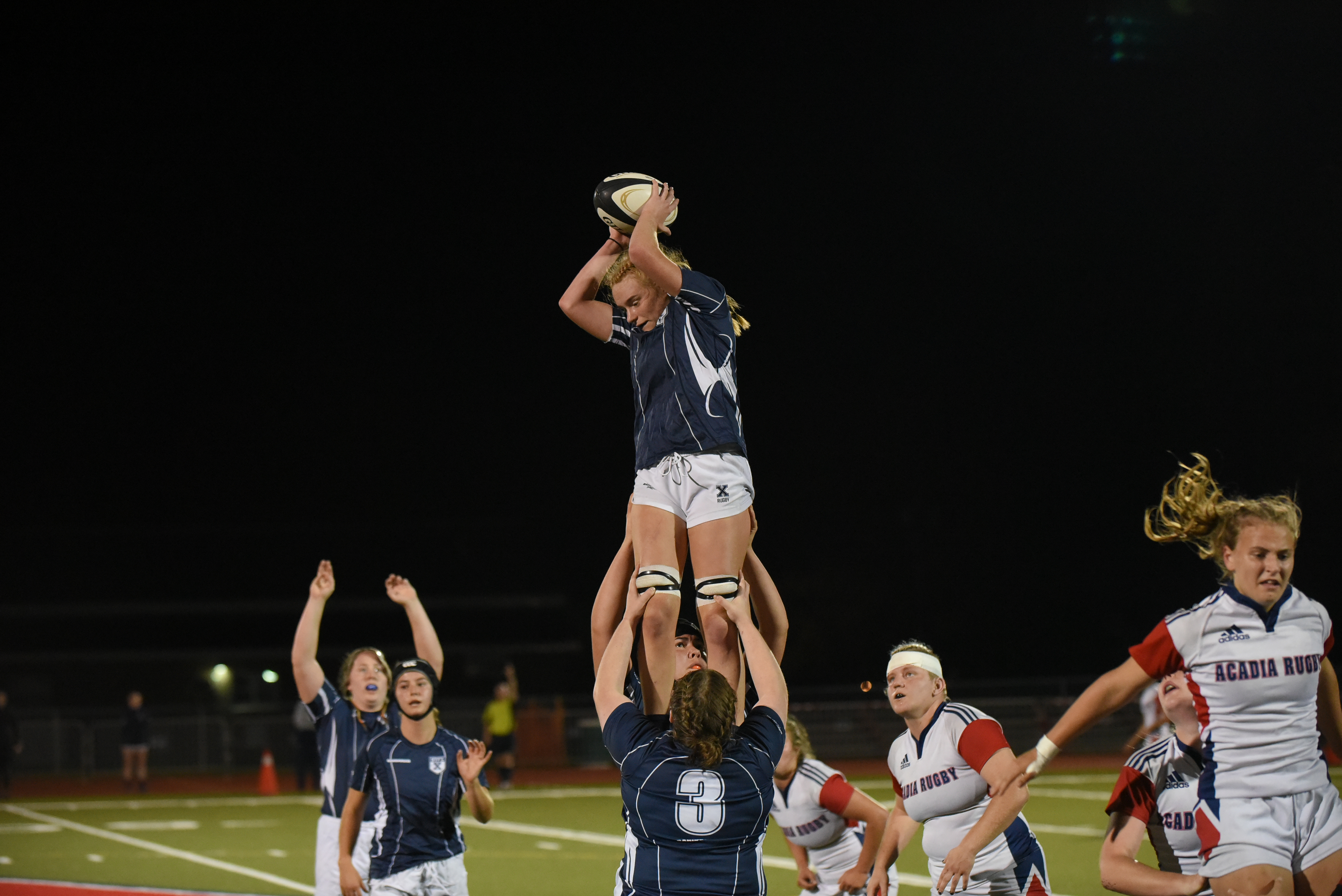 The StFX X-Women enter the 2021 U SPORTS championship as Atlantic University Sport (AUS) champions, returning to the national championship for the 23rd consecutive season.

Ranked nationally throughout the season, the X-Women sported a 3-3 regular season record to finish in second place in the AUS conference. They had a 2-0 playoff record with a 35-15 AUS semifinal win over UPEI followed by a 42-24 victory over Acadia in the AUS championship game. 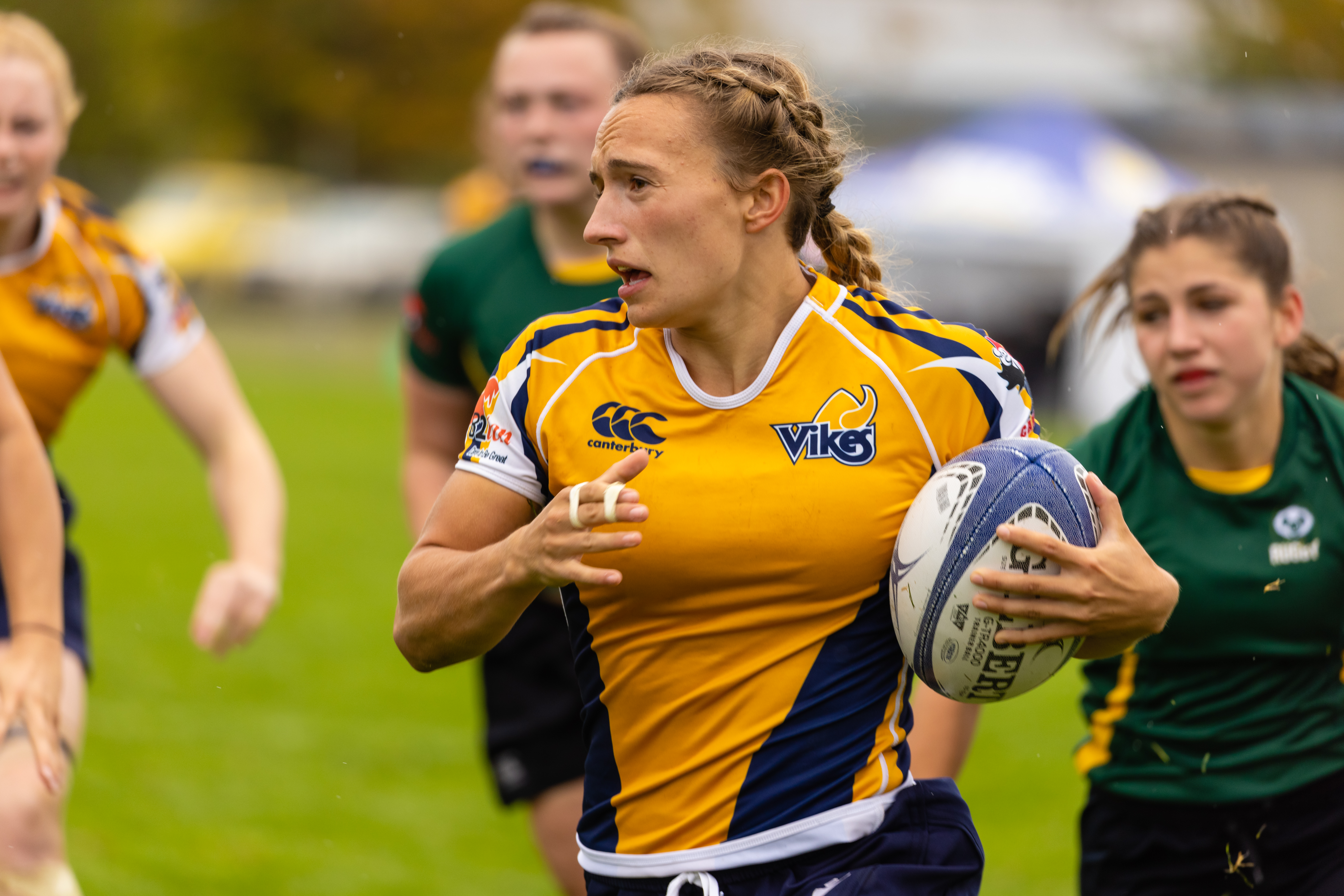 The University of Victoria Vikes enter the 2021 U SPORTS national championship tournament with a 4-3 record, composed of a 3-2 mark in regular-season play and a 1-1 showing at the Canada West Final Four. All three of UVic’s losses came against mainland rival University of British Columbia, the 2021 Canada West Champions.

Statistically, the point-scoring was well distributed among the Vikes in the regular season, with 15 different members of the squad registering a try this season. Larah Wright led the way with 15 points on three tries, with Alexie Pusch and Kira Peary tied for second-most points on the team with 11. Pusch scored one try and three conversions, while Peary had four conversions and one penalty goal for her points.

Entering the Canada West tournament as the second seed, the Vikes matched up with Lethbridge in the semifinals. Running away with a 36-7 win, the Vikes had six tries from six different athletes en route to punching their ticket to the U SPORTS national championships and the Canada West gold medal game.

The Vikes took home the silver in the final match of the tournament, falling to UBC, 47-13. While scoring opportunities presented themselves, the Vikes were bogged down by mistakes that allowed the Thunderbirds to run away with the contest. 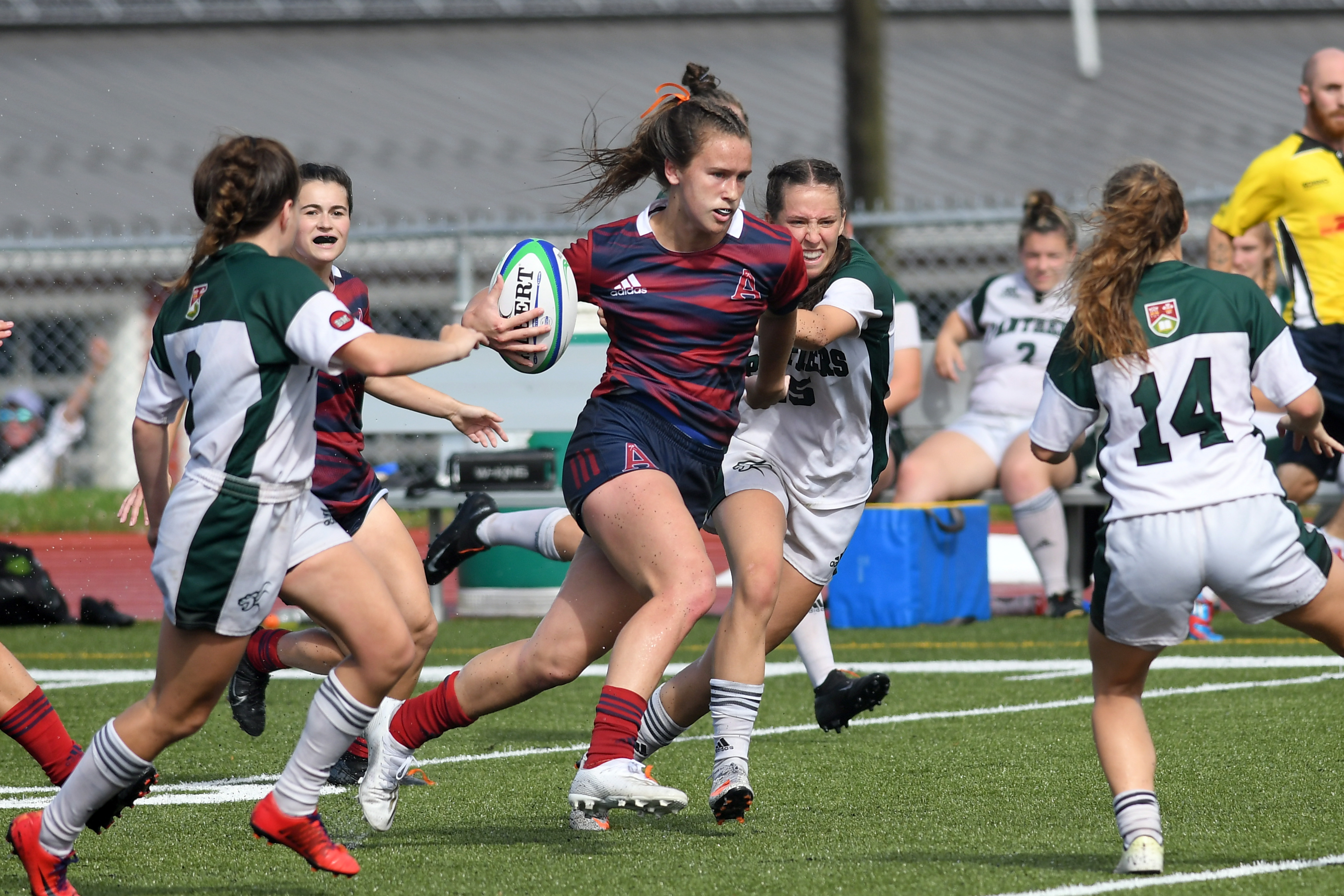 With “unfinished business” for many of the graduating seniors from the 2020 COVID season where no AUS Championship or games were played, a handful of veterans returned for what would be the first season in recent history that the Axewomen posted an undefeated season.

For the 11th season in a row, the Axewomen and X-Women would battle for the boasting rights of AUS Champions.

In a game that was marred with torrential rain and wind, the X-Women pushed out to a 28-7 halftime lead, but Acadia fought back with the wind at their back to a 28-24 deficit by the 55th minute of the game. StFX would carry the day as AUS Champions.

First-year centre Sara Grant was named the AUS Rookie of the Year, while head coach Matt Durant won the AUS Coach of the Year for the third time in 11 seasons.

Acadia was honoured with five AUS all-stars including seniors Taryn McLachlan, Emilie Merilainen, and Laura Pfleiderer along with Shea Hickey and Grace Pinch. 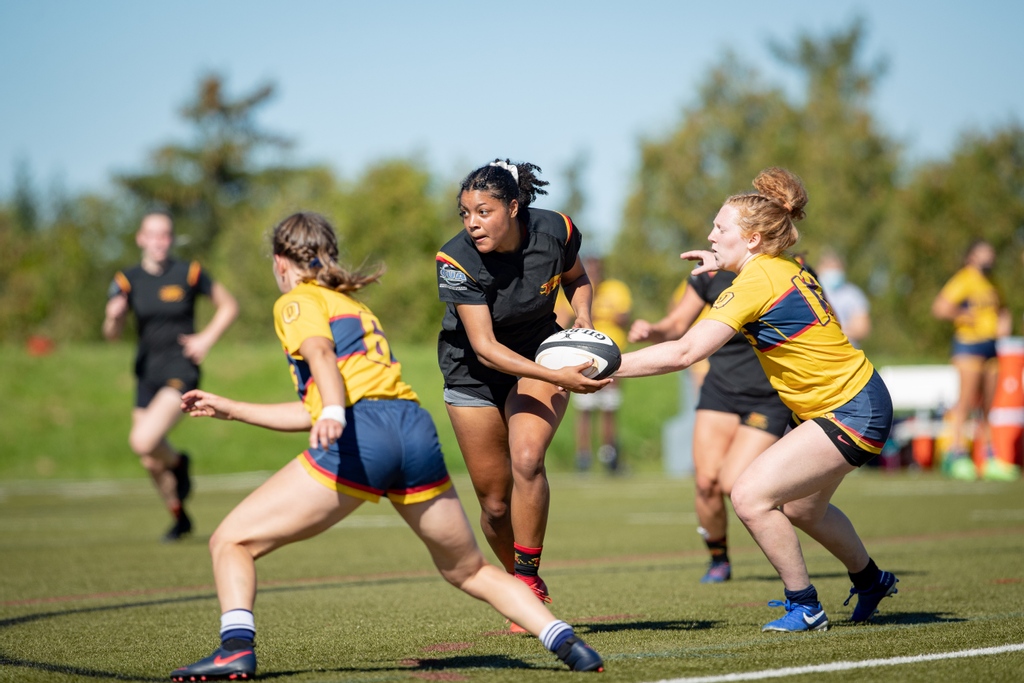 For the fourth consecutive season, the Guelph Gryphons and Queen’s Gaels met up in the OUA Final in women’s rugby, where Guelph upset the perennial powerhouse Gaels 32-23. The OUA gold medal is Guelph’s fourth in the past five seasons.

The Gryphons posted a 3-1 record during the regular season, with their lone loss coming to the Gaels.

Fly-half Kendra Cousineau helped the Gryphons earn an OUA banner on the heels of a productive season. The third-year sociology student played an integral role for Guelph, leading the squad with 36 points and 12 conversions. 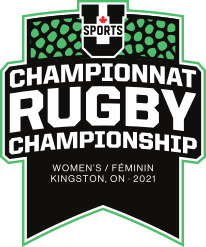 Digital coverage can be accessed on cbcsports.ca the free CBC Gem streaming service and the CBC Sports App for iOS and Android devices.