It was a pair of polar opposites in terms of how both games transpired, but the common theme was a victory in each for the Langley Thunder as they kicked off their BC Junior A Lacrosse League season over the weekend.

On Saturday night in Ladner, the junior A Thunder outscored the Delta Islanders 19-16 before hosting the Victoria Shamrocks on Sunday at Langley Events Centre, this time posting a 7-3 win.

“We talked yesterday about how we need to be mentally strong and much more structured and talk and be there for each other, proper positioning, and we did it,” said Langley coach Adam Smith.

“(Against Delta it) was mental mistakes, over and over, it seemed like we couldn’t stop the bleeding. And today, even when they got their two goals in a row, no highs, no lows, we didn’t come off that work ethic that we needed.”

The Thunder and Shamrocks were tied at three with a period to play before Langley scored the only four goals of the final frame.
Stuart Phillips led the offence with a goal and two helpers while Cody Malawsky, Graysen Balatti, Drew Kask, Ben Gagnon, Tristan Kirkham, and Declan Fitzpatrick had a goal apiece. Brayden Wandler made 44 saves on 47 shots.

Isaac Swan, Dylan Johannes and Finn Halliday had the Shamrocks goals.
The night before in Delta saw Langley build a 5-1 lead after a period before the teams exploded for a combined 17 goals in the middle frame, and then six apiece in the third.
Malawsky led all scorers with 10 points (four goals, six assists) while Kask had six goals and eight points and Phillips had a pair of goals and seven points. Kyle Brunsch (three goals, one assist), Kaden Doughty (two goals, two assists) and Fitzpatrick (one goal, one assist) rounded out the scoring. Kirkham chipped in with four assists.

Troy Cuzzetto (26 saves on 37 shots) and Wandler (12 saves on 17 shots) split the goaltending duties in the Thunder crease. Silas Richmond (five goals, two assists) and Ben McDonald (dour goals, one assist) did the bulk of the damage for Delta. 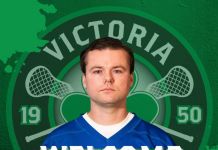 Brad Kri Back On The Island With The Rock

Rock Roll Over Burnaby In A Blow Out