Doak captured the first World Cup medal of her career in an individual, edging out teammate Danaé Blais at the finish line to grab bronze in the women’s 500m-2.

The 24-year old Fredericton native – who was fourth in yesterday’s 500m, a race won by fellow Canadian Kim Boutin – posted a time of 42.478, placing her behind Korea’s Minjeong Choi (42.384) and Xandra Velzeboer (41.602) of the Netherlands, who set a new world record in the distance on Friday, breaking Boutin’s mark established in 2019.

It was a heartbreaking result for Blais (42.486), who finished just off the 500m podium for the second straight weekend, having earned a then career-best fourth place at the season opener in Montreal.

Meanwhile, Moncton’s Sarault won her first World Cup medal of the season later in the evening, bringing home silver in the women’s 1000m.

The 22-year old was in the lead for the first three laps of the A Final but couldn’t hold off eventual winner Suzanne Schulting of the Netherlands (1:28.241). Sarault’s time of 1:28.291 placed her comfortably in second, ahead of Kristen Santos-Griswold of the U.S. (1:32.965), who was a distance third after being involved in a three-skater crash in the final lap.

On the men’s side, both Steven Dubois (Lachenaie, Que.) and Pascal Dion (Montreal, Que.) finished just shy of the podium. Dubois was fourth in the 500m-2, while Dion lost his balance in the second last lap of the men’s 1000m, a fall that relegated him to fifth place.

The day concluded with a pair of relay medals for Canada.

The men’s squad of Dubois, Dion, Jordan Pierre-Gilles and Maxine Laoun – defending Olympic champions in the discipline – reached the top step of the podium for the first time since winning gold in Beijing. After jostling for position for much of the race, Dubois pushed Dion into lead with 11 laps remaining and the Canadians (6:35.847) never looked back, elevating the speed to a pace the Koreans (6:36.539) and Chinese (6:37.054) couldn’t keep up with.

Canada ends the first two World Cup stops of the season with 12 medals, including five in the relays. Individual distance medalists include Dubois (2), Dion (1) Boutin (1), Laoun (1), Doak (1) and Sarault (1). 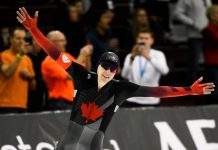 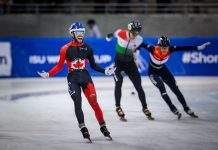