Canada’s long track team won a pair of World Cup medals in Stavanger for the second consecutive day, bringing home gold in the women’s team pursuit and silver in the men’s 500m.

Isabelle Weidemann, Ivanie Blondin and Valérie Maltais got back to their winning ways on Saturday with a gold medal performance in the women’s team pursuit. The Canadians posted a time of 3:01.810, picking up the pace in their final lap to push themselves ahead of the Dutch (+0.48) and Japanese (+1.09) teams.

It’s a promising start to the season for the trio, who captured three World Cup gold medals together in 2021-22 and earned the title of Olympic champions at Beijing 2022.

Meanwhile, Laurent Dubreuil also reached the podium in his first international race of the season, winning silver in the men’s 500m. Skating in the final pair, Dubreuil overcame a slower opening split (9.74) to post the second quickest time of the day, crossing the line in 34.750 seconds. Japan’s Yuma Murakami (34.708) was the winner, while Korea’s Jun-Ho Kim (35.017) took bronze.

It marked a return to the podium for Dubreuil (Lévis, Que.), who was crowned World Cup champion in the 500m last season after winning 10 medals over 12 races, including gold and silver on the very same ice in Stavanger.

Blondin was the top female performer in an individual distance on Saturday, finishing fourth in the women’s 1500m, just 1.70 seconds off the podium.

The World Cup in Stavanger concludes Sunday with the men’s and women’s 1000m and mass start. 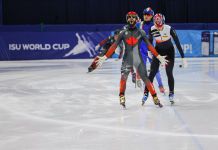